Tigers are a huge draw for travelers to India. The country is estimated to be home to around 70% of the world’s tiger population; with India’s Environment Minister recently announcing a 30% increase in numbers, there has been no better time to visit. With almost a third more tigers than four years ago, catching a glimpse of these beautiful and elusive creatures is now more likely.

As if to reinforce these statistics, Audley clients Mr and Mrs Granger have just come back from Ranthambhore with some wonderful close-up photographs of tigers.

One of India's most renowned national parks for spotting tigers, Ranthambhore is located in southeastern Rajasthan in Northern India. As well as tigers, there are leopards, striped hyenas, deer, jackals, sloth bears and several monkey species. It's also a good destination for birdwatching.

Parks which are good for tiger-spotting

The former hunting reserve of the Maharaja of Jaipur, Ranthambhore derives its name from a 10th century fort that sits high on a craggy outcrop. Set routes, usually in shared vehicles, are used for early morning and late afternoon game drives, with deer, monkeys, and colorful birdlife all frequent sightings. Although reports show a declining tiger population, Ranthambhore remains one of the best places to view tigers in the wild.

Reached from Raipur and Nagpur airports or Jabalpur train station, Kanha National Park has a healthy population of tiger. In addition it has over 200 bird species and 22 species of mammal, including leopard, the Indian wild dog and swamp deer. There is also sloth bear present although the bear’s crepuscular habits mean it is rarely seen outside the hours of dawn or dusk.

Bandhavgarh National Park are the most well-known areas, and are very popular with visitors. They have great tiger-sighting opportunities but as a result they have understandably become much busier. The government tries to restrict and regulate numbers but in peak season the volume of jeeps can still seem quite high.

Bandhavgarh is one of the oldest parks in India; it was first set up and opened with a conservation program in the 1960s. It’s a beautiful place to visit and works well as part of a trip combined with Kanha due to their close proximity. As a result of the high numbers of tigers in these parks, your sighting chances are inevitably increased – especially from February through to May.

Tadoba National Park is a hidden gem in central India. It has only two lodges and the highest density of tigers but it is not yet as well known as the neighboring parks. Private game drives are possible, which is an added bonus to those with specific interests.

The park is relatively easy to access and we’ve heard exciting news from Audley travelers and our guides on the ground who have reported recent sightings of cubs.

The best months to see tigers

Although it's pleasant to visit before the Christmas period, vegetation is still dense from the summer monsoons, which can make sightings a little more difficult.

If you are able to travel in Spring, the vegetation has started to die back, making for better views.

If you can tolerate the slightly higher temperatures in April and May, you might be rewarded with fantastic tiger sightings at the watering holes.

We scrambled through the bush. Unfortunately there were no tigers on this occasion – just the large paw prints a cat had left behind 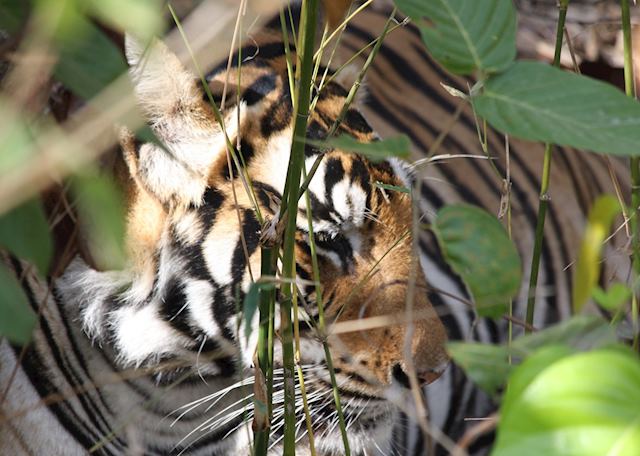