Thought to have inspired Kipling’s ‘Jungle Book’, Pench is a relatively new member of Project Tiger and perhaps the least known national park in Madhya Pradesh.

Despite being only two hours' drive from Nagpur airport, visitor numbers are low and its teak forests support a huge variety of birdlife. 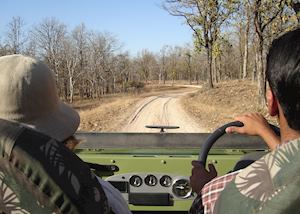 Although the tiger is more elusive here than in some of the other parks, mammals such as langur, spotted deer and jungle cat are regularly sighted. Entry to the park is prohibited after dark but a private night drive through the buffer zone with an expert naturalist is an exciting way of viewing some of the region’s nocturnal creatures, including the fascinating flying squirrel.

Our itineraries will give you suggestions for what is possible when you travel in Pench Tiger Reserve, and they showcase routes we know work particularly well. Treat them as inspiration, because your trip will be created uniquely by one of our specialists.

We’ve selected a range of accommodation options for when you visit Pench Tiger Reserve. Our choices usually come recommended for their character, facilities and service or location. Our specialists always aim to suggest properties that match your preferences.