By Julie and Peter De Vere Hunt, who travelled with us in November 2014

Petra (meaning ‘rock’) is the legendary rose-red city of the Nabatean people. It’s dramatically concealed behind a wall of mountains pierced only by the Siq Canyon.

Hewn from towering rock walls of multi-coloured sandstone, the imposing facades of its great temples and tombs are an enduring testament to the Nabateans’ vision.

Our visit to the rose-red city

There is no accommodation in Petra and we stayed at the Petra Guesthouse in nearby Wadi Mousa, which translates to the Valley of Moses. (It’s where he reputedly struck the rock and produced a spring.) 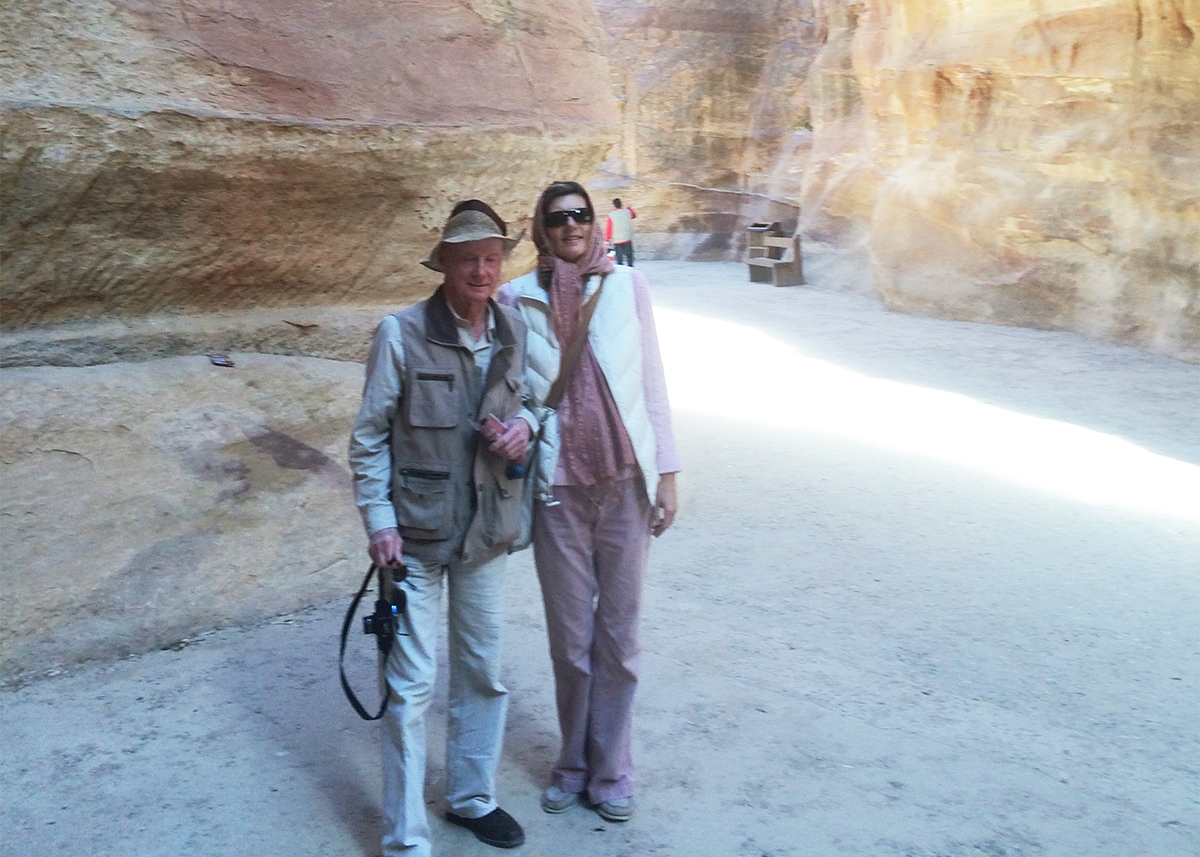 Julie and Peter at the Treasury

Making an entrance through the Siq

Isham, our Petra guide, met us and escorted us through the gate of the Siq.

The 1-mile (1.2km) long Siq Canyon often narrows to about 5m (at some points to just 2m) wide. The walls tower up to 200m overhead. It is not a canyon carved out by water, but a single block that has been split by tectonic forces.

As the Siq wound along, with anticipation building we looked around each corner for our first glimpse of the Treasury.  At 43m high and 30m wide, bathed in the morning sunlight, it was like something from a film set. 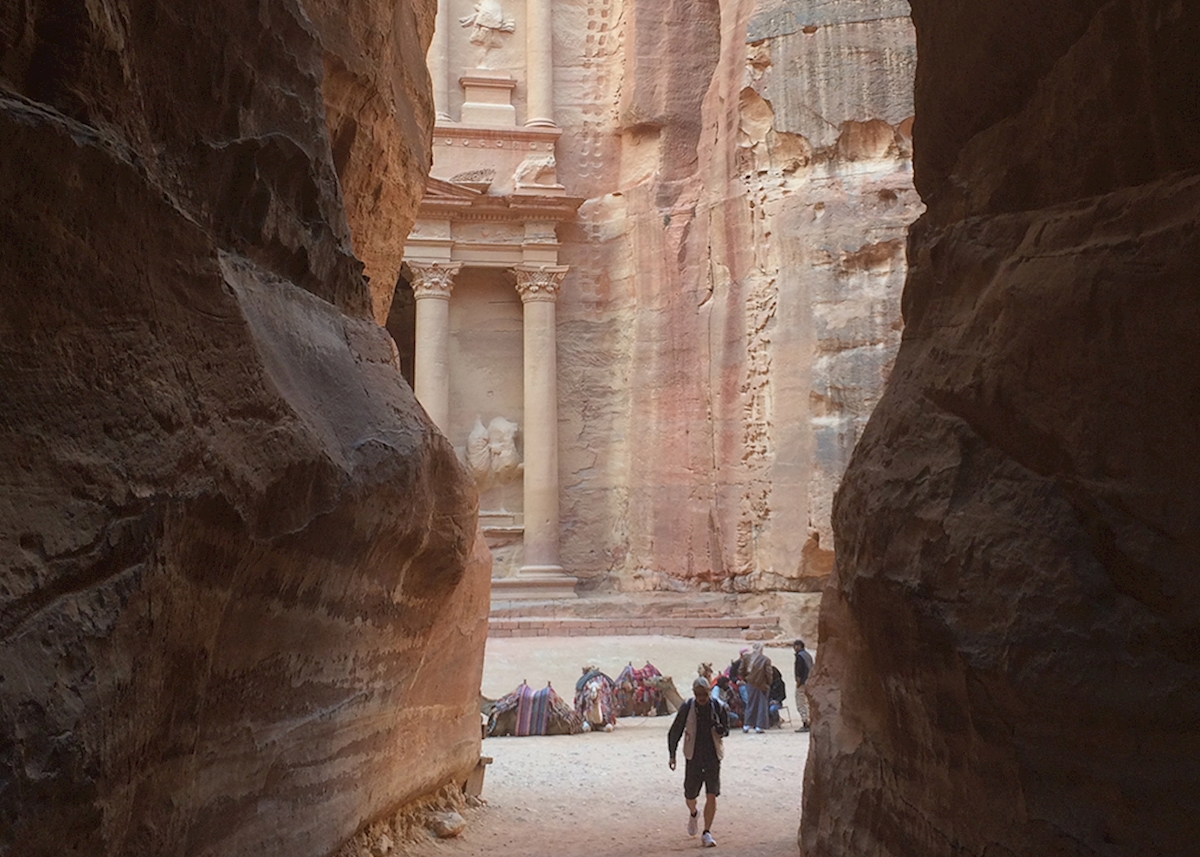 The passageway to the Treasury

Home to the local Bedouin

There are more tombs dotted around Petra than any other structure. The area is vast and less than ten per cent has been excavated.

Almost as spectacular as the monuments themselves are the countless shades and Neapolitan swirls formed in the rock. Few buildings in Petra are free standing: the bulk were chiselled and bored out of the rock face. Until the mid-80s, many of these caves were home to the local Bedouin.

Bird’s-eye views and solitude at the Monastery

We climbed 800 steps up to the Monastery (there are donkeys plus guide if you are not able to walk). It is similar in design to the Treasury, but simpler.

The 45-minute climb is well worthwhile. The bird’s-eye views west spread over Wadi Arabia into Israel and the Palestinian territories. To the south we could see the peak of Jebel Haroun, topped by a small white shrine where Aaron, Moses’ brother, is believed to be buried. 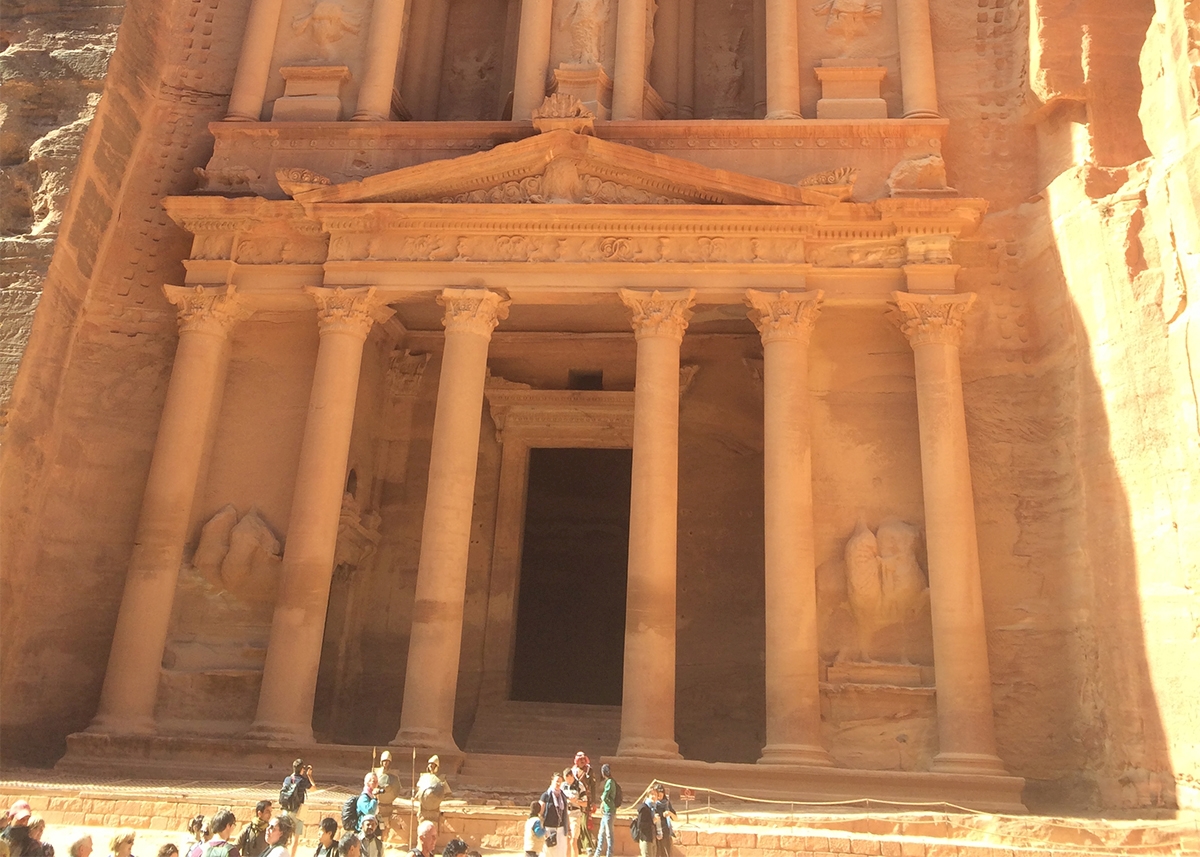 The Treasury at Petra

Far from the madding crowds

We were in Petra by 7.30am the following morning. There were just a handful of us and the Treasury looked even bigger.

We climbed up to the High Place of Sacrifice. Apart from two Americans we had the place to ourselves. We bathed in the silence admiring the views for around an hour.

We followed Audley’s suggestion and returned to the city via another route, past more tombs and monuments. This hour-long walk was a highlight – second only to our first view of the Treasury.

We had only scratched the surface of Petra, but felt privileged to have spent two days admiring the feats of a remarkable Arab tribe.

An Arab people, the Nabateans dominated the region from around 100BC until 106AD, when they eventually succumbed to the Roman Empire.

In its glory days, Petra was home to around 30,000 inhabitants. It was gradually abandoned (as trade routes changed) and became completely lost to the West until a Swiss traveller named Johann Ludwig Burckhardt rediscovered it in 1812. 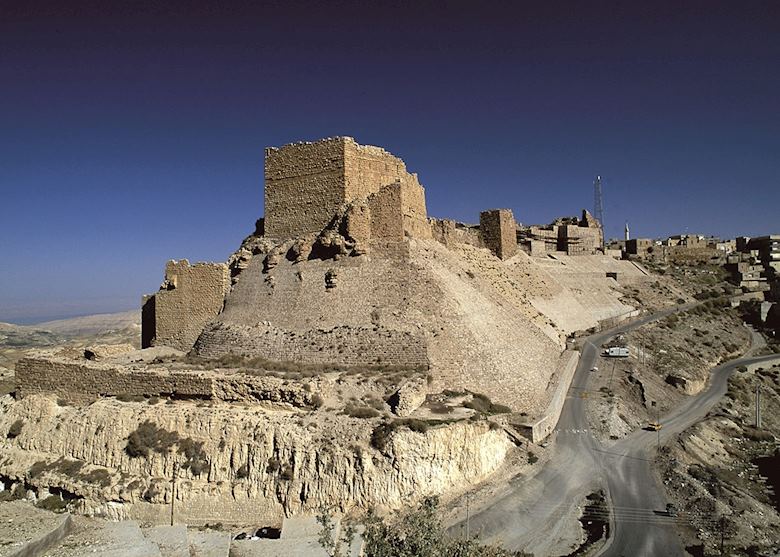 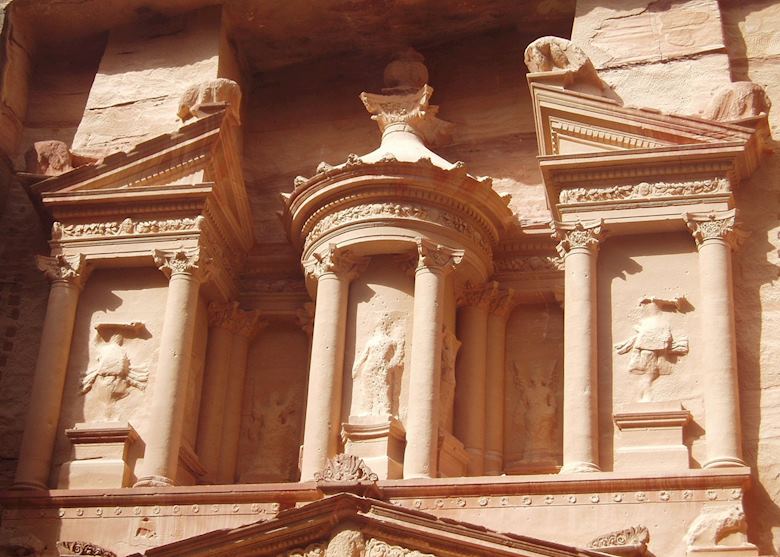 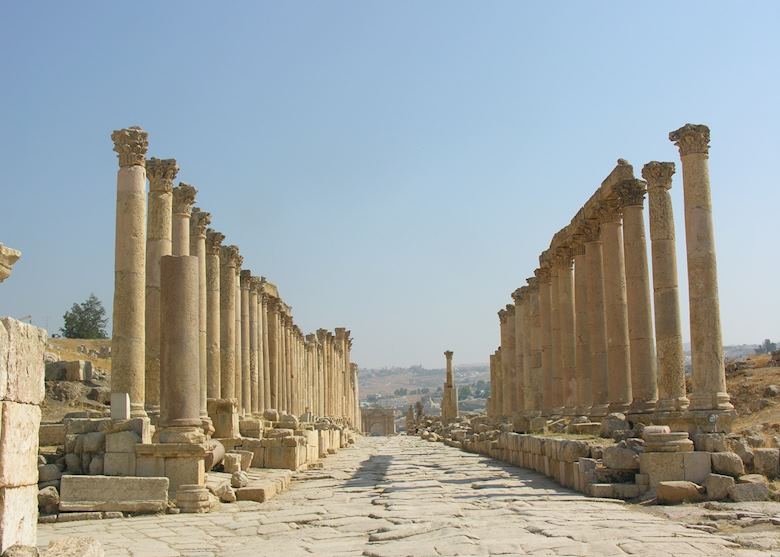