The King's Highway in Jordan

For centuries, the King's Highway was the principal route for traders travelling between Arabia and the Levant.

It hugs the edge of the Great Rift Valley, with the Dead Sea filling the bottom of this huge split in the Earth. The highway crosses countless riverbeds and the availability of water made this a key trade route.

These days, most heavy traffic takes the Desert Highway, leaving the winding switchbacks, dramatic vistas, castles and churches to the intrepid visitor.

Some of the sights of the King's Highway can be visited on a drive through Jordan between Amman and Petra, but a return journey on the same route can be the best way to visit them all.

Start planning your trip to Jordan

Things to see on the King's Highway

Built by the Nabateans, who grew rich through their control of the frankincense trade routes through Arabia, Petra fell into obscurity about a thousand years ago, while its existence - and location - were kept a closely guarded secret by the local Bedouin.

In 1812, Johann Ludwig Burckhardt tricked his way into the site, and almost immediately other visitors began to follow.

A couple of days here will give you time to see two of its most iconic structures, the Treasury and Monastery, and also allow for some time to explore further afield.

Also managed by the Royal Society for the Conservation of Nature (RSCN), the Dana Nature Reserve covers over 300 square kilometers.

It is made up of a system of wadis and mountains, which extend from the top of the rift valley down to the desert lowlands of Wadi Araba.

The reserve is home to a variety of wildlife, incredible canyon scenery, ancient copper mines, and local villages such as Dana village, which has been inhabited since around 4000 BC.

With fewer visitors than Kerak and still in need of restoration, Shawbak is in some ways a more rewarding stop on the King's Highway.

It is more of an adventure to explore, wandering around ornately decorated towers, past crumbling churches and underneath vaulted passageways.

The truly intrepid, equipped with a torch, can descend the 350 steps under the castle to the well that allowed the Crusaders to hold out for two years before it fell to Saladin in 1189 AD.

Kerak Castle towers over the modern town and it is easy to see why all the powers involved in the Crusades wanted control of this bastion.

Kerak was established in the 12th century and remained in Crusader hands for just 40 years. Its already excellent defensive features were further refined by the Mamluks, with the addition of a lower courtyard and a deeper moat. The castle is certainly a highlight of a trip along the King's Highway with a number of interior halls and chambers to explore.

Jordan's capital, Amman, is a bustling modern city, but also offers glimpses into its past. Highlights include its Roman theatre, and the Citadel, which is located on a hill overlooking the city, where you'll also find Roman, Byzantine and Umayyad ruins to explore.

Located at the northern end of the King's Highway, Madaba has a strong Christian heritage, with numerous churches dotted around its quiet, charming streets.

The town is best known for the fine examples of Byzantine era mosaics, the most famous of which is a map from the 6th century depicting the Holy Land.

It is easily explored on a walking tour, taking in all the churches and the archaeological park, which is an open-air museum.

Said to be the spot from which Moses viewed the Holy Land and where tradition has it he was later buried, Mount Nebo is an important place for Christian pilgrimage. A church has existed on this site since 393 AD and although it has been much altered and restored since then, it still houses some mosaics that are around 1,500 years old.

Mount Nebo is the perfect place to stop on the King's Highway for a view over the Holy Land. On clear days it's possible to make out the towns of Jericho and Jerusalem in the distance, across the Jordan Valley and the Dead Sea.

A short drive off the King's Highway, on a pinnacle overlooking the Dead Sea, you will find the castle of Mukawir. It was the site of Herod's Palace, where Salome asked for the head of John the Baptist as a reward for her dancing, and also a centre of resistance to Rome during the First Jewish Revolt.

After a steep climb up to the castle you are rewarded with fantastic views over the surrounding hills. The outline of the camps and even the siege ramp built by the Romans to capture Mukawir can still be seen.

One of the six nature reserves in Jordan managed by the Royal Society for the Conservation of Nature (RSCN), which was founded in 1966 to protect its natural heritage, the Mujib Nature Reserve of Wadi Mujib features spectacular canyons and valleys.

Unlike many river valleys in the region, Wadi Mujib has a year-round water flow thanks to seven tributaries. It is home to many species of flora and fauna, including the rare Nubian ibex.

Another site of biblical renown, Lot's Cave is where the prophet reputedly sheltered following the destruction of Sodom and Gomorrah.

Found at the southern end of the Dead Sea, the artefacts recovered from the site are linked to various different periods of history and the site itself is worth a visit for its dramatic location.

Accessed by 300 steps, the cave is protected by the remains of a church, which houses five restored mosaics dating to the 6th century AD. It was originally designed so that Jewish and Muslim pilgrims could also enter the cave without needing to pass through the church threshold.

The views over the town, the surrounding countryside and to the Dead Sea are breathtaking from here. 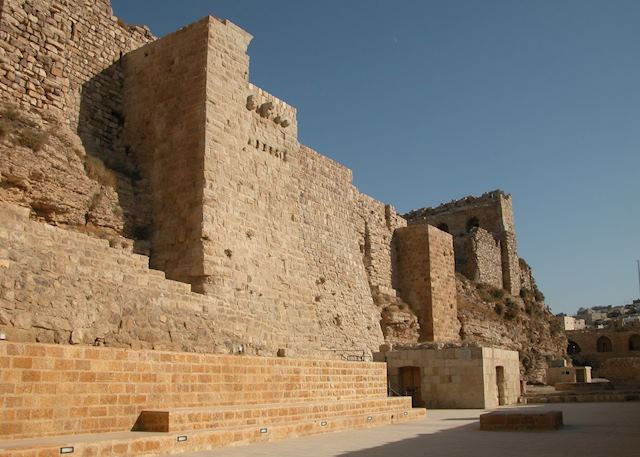