Seba Camp is situated on the western floodplains of the Okavango Delta, an area known for large numbers of herbivores and associated predators. The camp is built on a large island facing west, with a large floodplain stretching from the tents into the distance. The island has large trees and good ground cover and for four months of the year the floodplains over which the camp looks are under water.

Seba, meaning 'whisper,' is named after one of the Abu's Camp (sister camp to Seba) released elephants. The camp is constructed on the ground and each of the eight luxury guest tents have an en suite bathroom with twin basins, flush toilet and shower — as well as an outdoor shower for those who would like to shower under the African sky. There is also one family unit with two interleading, en suite double bedrooms. The main area constructed of canvas and wood, comprises a bar, lounge and dining area and there is an elevated deck with small swimming pool for cooling off in the warmer afternoons.

Activities include game drives, night drives, boating, mokoros, walks and general birding around the camp. The activities will depend on each year's flood levels, however generally there is a primary focus on land activities most of the year with a 50/50 combination of land and water activities in times of flood.

Abu Concession and nearby places 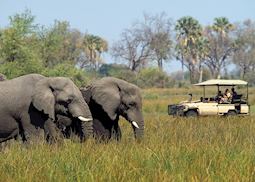