Fugitives' Drift is the ford (or 'drift') where many of fleeing British and colonial troops lucky enough to escape Isandlwana alive crossed the Buffalo River back into the Crown Colony of Natal. Just on the Natal side of the river lie the graves of Lts Coghill and Melvill, awarded the first-ever posthumous Victoria Crosses for their ultimately unsuccessful attempts to save the Regimental Colour.

Formerly a farmhouse, the guesthouse is decorated in simple African style, with stone floors, adobe walls and African art throughout. There is a nice sense of space and openness about the public areas, while the rooms all lead off a small, well-tended garden. The rooms are simply, but comfortably furnished, and have private verandas with views over the Fugitives' Drift Reserve, where plains antelope can be seen.

The tours to Isandlwana and Rorke's Drift run daily and are the highlight of a stay here. The guesthouse is owned by Nicky, wife of the late David Rattray who was one of the foremost authorities on the Anglo-Zulu war, and someone for whom the real story lay in the individual human drama. His approach was groundbreaking, in that he spent his life among the Zulu people learning their stories of Isandlwana and Rorke's Drift and talking to people whose parents fought in these battles.

Today the guides at the lodge continue his legacy and it gives their stories a completeness and balance that cannot always be found in the traditional histories. Every guide and member of the guesthouse staff wants to share his enthusiasm and passion with you, making a visit to Fugitives' Drift an unforgettable experience.

Tour ideas in The Battlefields

Our itineraries are there to spark ideas for how you could include a stay at Fugitives' Drift Guesthouse as part of your trip. Treat them simply as suggestions, because every aspect of the trip we create for you will be yours to define.

The Battlefields and nearby places 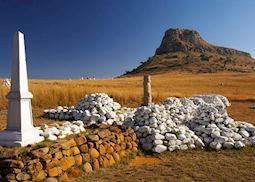 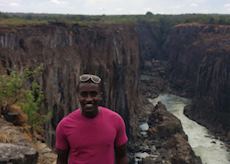