Knotted rock formations twist up from green, open plains, mountains dotting the horizon. Today, everything is still. But, back in the 19th century, this area of northern KwaZulu-Natal was a maelstrom of action as British, Boer and Zulu armies clashed in several bloody encounters. Thousands were killed, their bodies in some cases buried beneath piles of white stones that you can still see dotting the landscape (the ground was too hard to dig proper graves). 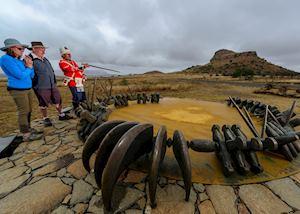 Led by some of the region’s best guides, you can tour these Battlefields. As you take in the landscape and the remains of stone forts, your guide gives a detailed account of the events leading up to the battles, the tactics at play, and the lives of those affected.

The Battlefields is a land that echoes with its violent past. Here, you can visit a collection of sites from across a number of confrontations. Isandlwana and Rorke’s Drift were caught up in the 1879 Anglo-Zulu War. In 1900, Spioenkop saw conflict in the Second Anglo-Boer War, which had Winston Churchill and Mahatma Gandhi among its campaigners. And, Blood River witnessed the 1838 clash between the Boers and Zulus.

Staying in one of the area’s lodges, you can join half- or full-day tours of each battlefield, led by experienced guides who bring history to life with tales of the conflicts.

The battlefields of Isandlwana and Rorke’s Drift 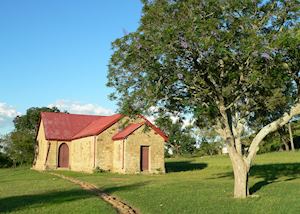 These two battles took place on the same day (22nd January 1879), and you’ll usually cover them in one tour. In a small group, you’re led by a guide who’s an expert in this field and can answer any questions you have as you wander around.

Eleven days after the British invaded Zululand, some 20,000 Zulu warriors descended upon British forces and overpowered them at the foot of the Isandlwana Hill. Your guide will describe how the Zulus adopted a ‘buffalo horns’ formation, flanking the British on all sides before closing in. All but 300 of the 1,500 British soldiers were killed.

As you gaze over the battlefield from an elevated position, it’s difficult to comprehend the stamina and bravery of the Zulu warriors as they ran head-first into the British troops. Most were only armed with assegai (iron spears), compared with the rifles carried by their enemy.

You then descend onto the battlefield itself, where white piles of rock, or cairns, cover the bones of the long-fallen troops. Each cairn holds around ten soldiers, so it’s easy to grasp the scale of devastation.

Afterwards, your guide takes you to Rorke’s Drift. The nearby Buffalo River formed the border between British and Zulu territories, so the area was strategically important for both sides. On the evening of 22nd January 1879, just over 150 British soldiers defended the trading-post-turned-field-hospital here against 4,000 Zulu warriors. Their success resulted in 11 Victoria Crosses being awarded — the record for a single engagement.

The battlefield of Spioenkop 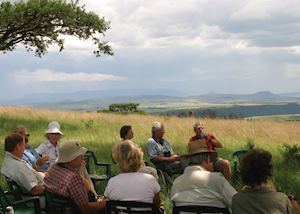 The largest hill in the region, Spioenkop was the scene of a two-day battle between British and Boer forces on 23rd and 24th January 1900. The British were attempting to relieve forces besieged in Ladysmith, but the Boers saw them coming and were able to gain advantage on the hill. The result was 243 British fatalities compared with just 63 on the Boer side.

Visiting with a guide, you see the different positions each side took on the hillside. Your guide also recounts the events that took place here, including the roles of Churchill as a courier and Gandhi as a stretcher-bearer.

The battlefield of Blood River 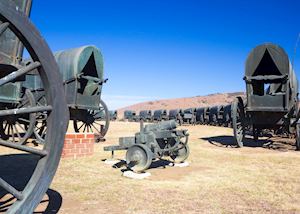 On 16th December 1838, 470 Boers came under attack by around 12,000 Zulu warriors on the banks of the Ncome River. The two parties were in a conflict over land after the Boers had left the increasingly British-dominated Cape Colony, heading inland.

Despite the large difference in numbers, the firepower of the Boers prevented them from suffering any fatalities. However, the Zulus were killed in their thousands, their blood turning the river red.

As you stand where the action would have taken place, your guide will help you gain a detailed understanding of what happened on that day. You can also find out more about the different cultural conflicts that led to the violent clash.

When to visit the Battlefields

You can visit the Battlefields at any time of year, with temperatures remaining pleasant even in winter. Bear in mind that rain is more likely between November and March.

Our itineraries will give you suggestions for what is possible when you travel in the Battlefields, and they showcase routes we know work particularly well. Treat them as inspiration, because your trip will be created uniquely by one of our specialists.

Map of the Battlefields

Places near the Battlefields

Photos of the Battlefields

Accommodation choices for the Battlefields

We’ve selected a range of accommodation options for when you visit the Battlefields. Our choices usually come recommended for their character, facilities and service or location. Our specialists always aim to suggest properties that match your preferences.

Ideas for experiencing the Battlefields

Our specialists seek out authentic ways to get to know the places that could feature in your trip. These activities reflect some of the experiences they've most enjoyed while visiting the Battlefields, and which use the best local guides.