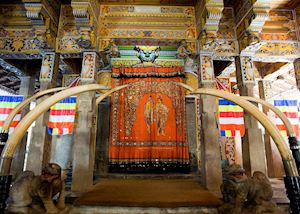 At the temple, puja (prayers) occur daily, where the tooth is taken out of its chamber in its golden casket for devout Buddhists to worship. The room is filled with flowers, praying Buddhists, onlookers and the sound of rhythmic drummers. Outside of puja, you can quietly admire the temple’s contrasting simple wooden structures, flamboyant Buddha statues and lavish gold roofs. 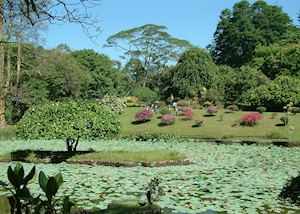 Originally created solely for Kandyan royalty, the botanical gardens are now open for everyone to enjoy. Set 6 km (4 miles) outside the city, the gardens are a peaceful haven and home to over 4,000 plant species including the coconut-like cannonball fruit tree, towering Burma bamboo and orchids.

Back in the city, you can delve into the Kandyan food scene on a guided walking food tour. You’ll be taken on a culinary journey through Kandy’s markets, sampling tropical fruit and milky ‘workers tea’, before being greeted with plates of freshly fried Kandyan snacks such as wade at a woman’s cooperative. Your day culminates in visiting a café for curd and treacle (a typical Sri Lankan desert).

Kandy becomes crowded in July and August, for 10 days, as the Buddhist festival of Esala Perahera is celebrated.