A British-accented community in the heart of Sri Lanka’s tea country, Nuwara Eliya is, in one word, green. Almost every hillside is bright with neatly trimmed tea bushes. The mock-Tudor architecture and velvety golf courses recall the days when this was the preferred retreat of the British in the years after they defeated the Kandyan Kingdom to take control of Sri Lanka. The area is less than three hours north of Kandy and many people prefer to arrive via train, but we can also arrange for you to take a car, which will gives you the flexibility to indulge in side jaunts with time to stop and enjoy the views at your own pace.

Things to see & do in Nuwara Eliya

Driving along the twisting roads through a tea estate, you’ll see brightly clad workers, predominantly women of Tamil origin, working among the manicured rows. At the heart of the verdant fields, the tea factory offers a glimpse of the complex stages of the tea-making process. Depending on the day, you might see different parts of the process, which starts with plucking just the lightest-green leaves from the top of the branches and continues through many steps like drying, oxidation, curing, and sorting. True tea devotees can even stay in a former tea factory. 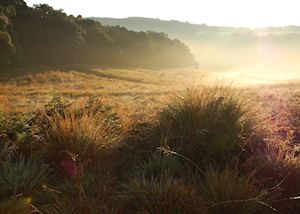 Located an hour south of Nuwara Eliya, Horton Plains National Park is an undulating plateau of montane grassland, misty lakes, and dense cloudforest. This is home to a wide range of bird species, including three that can only be found in the park — the dull-blue flycatcher, Sri Lanka white-eye, and Sri Lanka wood pigeon. It’s also a herpetological paradise, with as many as 15 species of lizards.

We can arrange for you to visit the park in early morning with a private guide, when the birds are most active. Ascend through the wooded countryside along winding lanes and, if you’re lucky, you might catch a glimpse of Adam’s Peak in the distance — the tall conical peak has a footprint-shaped formation near the summit, held to be let by the Buddha, and the mountain is considered sacred.

The British nicknamed this part of Sri Lanka ‘Little England’, due to its year-round tendency to rain. However, for the best weather and fewest showers, visit Nuwara Eliya from February to May. Be aware that the Sinhalese New Year falls in mid-April, bringing crowds and festivities.

Our itineraries will give you suggestions for what is possible when you travel in Nuwara Eliya, and they showcase routes we know work particularly well. Treat them as inspiration, because your trip will be created uniquely by one of our specialists.

We’ve selected a range of accommodation options for when you visit Nuwara Eliya. Our choices usually come recommended for their character, facilities and service or location. Our specialists always aim to suggest properties that match your preferences.

Our specialists seek out authentic ways to get to know the places that could feature in your trip. These activities reflect some of the experiences they've most enjoyed while visiting Nuwara Eliya, and which use the best local guides.