Lake Manyara is a shallow alkaline lake at the base of the western stretches of the Rift Valley Escarpment.

It glitters in the sun and is often covered in cloud upon cloud of pink lesser flamingos. In the deeper areas of the lake small pods of hippo bask, ears flickering, with egrets resting on their backs.

Surrounding the lake is a particularly pretty park with a variety of habitats, including grassy floodplains, groundwater forest, acacia woodland and the rocky base of the escarpment. 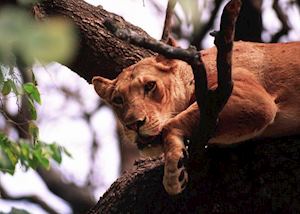 The park has excellent game densities and is perhaps best known for its tree-climbing lion, often found sprawled in the branches of sausage trees. There are big troops of olive baboon and blue monkeys, prolific elephant, buffalo, wildebeest, giraffe and zebra as well as a whole host of smaller animals.

Birdlife in the park is superb, with almost 400 species recorded. There are iridescent bee-eaters, silvery-cheeked hornbills and on the lake you’ll often find white pelicans as well as the flocks of flamingo.

Our itineraries will give you suggestions for what is possible when you travel in Lake Manyara National Park, and they showcase routes we know work particularly well. Treat them as inspiration, because your trip will be created uniquely by one of our specialists.

We’ve selected a range of accommodation options for when you visit Lake Manyara National Park. Our choices usually come recommended for their character, facilities and service or location. Our specialists always aim to suggest properties that match your preferences.