One of the most historic buildings in the area, parts of The Mermaid Inn date back to the 1100s and the haphazard layout of the interior with its narrow corridors, sloping ceilings and hidden passageways, reflects this. The inn is situated on Mermaid Street which is one of the most characterful in Rye, with cobblestones, vines and flowers crawling up medieval half-timbered buildings and a view down towards the river.

Within, you’ll find exposed wooden beams, traditional rugs, large fireplaces and stained glass windows throughout, along with squeaky floorboards, uneven corridors and low ceilings. Each of the 31 room is individual in style and layout and named after a significant local character or incident in the building’s history. Some have four-poster beds or intricately carved antiques, others latticed windows and secret passageways.

The hotel has a public bar, whose enormous fireplace has a priest hole (a 16th-century hiding place for Catholic clergy) halfway up the chimney, while the Linen Fold Panelled Restaurant is highly-regarded locally for its modern British menu. Due to the historic nature of the hotel, there is no lift, but staff are on hand to help with luggage whenever needed. 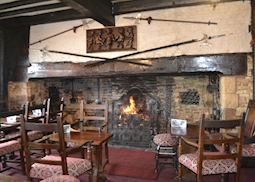 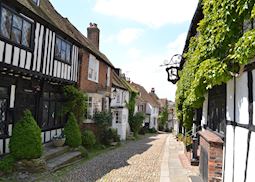 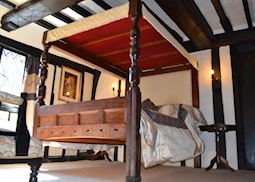 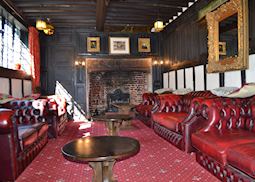 Each of the 31 rooms is different with individual layouts due to the historic nature of the building. All are named after people linked to the building in times past or historical events that happened here. Throughout, you’ll find antique furniture and exposed beams, traditional rugs and rich fabrics. Some rooms have four-poster beds and open fireplaces, with the historical rooms the most spacious and traditionally decorated. Bathrooms, some of which are accessed via a small step, are mostly quite small and some have just a bath. WiFi, although patchy, is available throughout the building.

The Mermaid Inn is situated towards the top of Mermaid Street, one of the most attractive and photographed streets in Rye. A narrow, cobbled lane sloping steeply downhill, it is lined with half-timbered and red brick buildings with vines crawling up their façades. The High Street runs parallel and can be accessed by walking through the hotel’s carpark.

The restaurant serves award-winning cuisine, with either a two- or a three-course modern British menu in the evenings which uses locally-sourced ingredients such as Romney Marsh lamb, Rye Bay cod or Winchelsea beef. The lunch menu offers lighter options, while at breakfast guests can choose from a cold buffet as well as a menu of hot dishes. The popular public bar is an intimate and welcoming space decorated with dried hops.

We love the characterful history of the inn, and the higgledy piggledy nature of the rooms. The food is fantastic too!