Of all the world's ancient civilisations there are few more famous than the Maya and Aztec empires which developed across Mexico and Central America, within the area known as Mesoamerica.

These ancient civilisations had certain traits in common: they both had a form of writing, a calendar, a ball game, both built grand temples and had advanced agricultural methods. They were also distinct from each other in many respects and visiting their remains today makes for fascinating experience, not only to learn about the history, but also their unique settings. 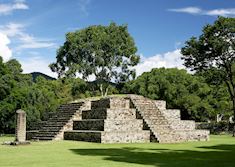 The Cayo District incorporates the forests of western Belize, centred around the town of San Ignacio, near to the border with Guatemala. Caracol is the largest Mayan archaeological site in Belize. 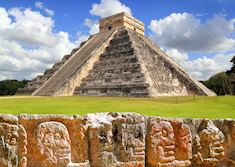 The archaeological site of Tulum is spectacularly situated on a clifftop, majestically overlooking a palm-fringed beach and the turquoise Caribbean Sea.