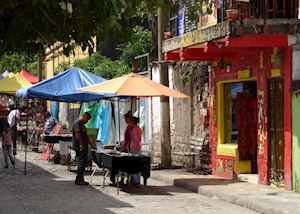 As with many of Central America’s archaeological sites they were buried in jungle when rediscovered in 1839. The site was cleared in the 1930s to reveal intricately carved stelae (three metre columns of stone), a hieroglyphic stairway and several ball courts.

This sample itinerary will give you an idea of what is possible when you travel in Copán, and showcases routes we know work particularly well. Treat this as inspiration, because your trip will be created uniquely by one of our specialists.