The sheer force of nature is demonstrated at Dettifoss, Europe’s largest waterfall by volume, where meltwater from the Vatnajökull ice cap roils and tumbles over a precipice into the gorge below. The cloud of spray produced by the thundering water can be seen from far across the grey basalt landscape, and as you approach, the sound of the plummeting water greets you well before the falls come into view. So dramatic are the falls, that they have featured in many Hollywood productions, including Thor, Oblivion, and in the opening sequence of Ridley Scott’s Prometheus.

The drama of the falls comes partly from the stark rocky landscape that surrounds it and the scale of the canyon into which it falls. The Jökulsárgljúfur Canyon, a huge gash in the Earth, is the largest in Iceland, dropping 45 m (148 ft) at the point of the falls. Most striking, however, is the sheer force of the falls. Roughly 100 m (328 ft) wide, at the height of their flow over 1000 litres (219 gallons) of water plunge over the edge every second. It’s hard to comprehend the figures, but in person, it’s an arresting sight and sound. And, the spray produced means you should be prepared to get wet even from the safety of the marked trails around the falls. 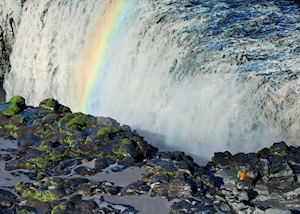 Flow is at its strongest in the summer months, when meltwater from the Vatnajökull glacier thrusts through the landscape. The mineral-rich water from the glacier is a milky grey from the silt it carries, lending an unusual monochrome effect to the scene. But, on clear days, the views are often brightened by double rainbows as the spray is illuminated by the sun.

Our expert guides to exploring Dettifoss

Written by our specialists from their own experiences of visiting Dettifoss, these guides will help you make the most of your time there. We share both our practical recommendations and the best ways to appreciate Dettifoss at its best.