By international standards, the Icelandic capital is a diminutive place, with just 217,000 living here. But, this is more than half of the country’s population, and what the city lacks in size, it more than makes up for in character.

The city has a creative atmosphere, with a thriving arts and music scene, vibrant street art on every corner and a host of festivals held throughout the year. Trendy bars and restaurants vie for attention, contemporary art galleries line the streets, and brightly-painted buildings demand to be captured on camera.

Reykjavík’s compact nature means that you can walk almost everywhere. And, with a wide choice of hotels and its proximity to many of Iceland’s attractions, it makes a great base from which to explore.

Not only is Reykjavík an interesting, compact-sized city to explore in its own right, I also find it a great springboard for experiencing many of Iceland’s key highlights, whether it’s a visit to the Blue Lagoon or a tour of the Golden Circle.

Things to see and do in Reykjavík 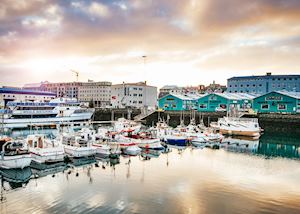 Reykjavík was the first permanent settlement in Iceland, established by Norwegian settlers in about 870 AD. Its name means ‘smoky creek’, which probably refers to the steam rising from surrounding geothermal fields.

The Landnámssýningin (Settlement Exhibition) traces the lives of the region’s first inhabitants. You can also visit the excavated remains of a Viking longhouse, which lies under the city streets. Along the way, interactive displays explain how early homes were constructed and describe the food, tools, living conditions and culture of these pioneering settlers.

Reykjavík remained a quiet backwater until the early 17th century, when Danish fishermen established a successful base here. The historic heart of the city surrounds the port, where a scattering of brightly-painted wooden buildings, vibrant street art and a good choice of independent shops give the streets a lively air, even under grey skies.

Fishing boats still ply the waters, overlooked by the shimmering national concert hall, Harpa. Nearby is Höfði House, where Gorbachev and Reagan met in 1986 and effectively ended the Cold War.

Back from the waterfront, Laugavegur is the main shopping street. You’ll find lots of restaurants and bars, shops selling traditional Icelandic crafts, clothing and souvenirs, and numerous examples of the city’s public art projects.

Reykjavík has lots of great museums, but the most renowned is Þjóðminjasafn Íslands (National Museum of Iceland), which documents Iceland’s history from its Viking settlers to the present. The Listasafn Íslands (National Gallery) showcases the work of 20th-century Icelandic artists, while the Culture House has themed exhibitions on Icelandic history that change regularly. On the waterfront, the Saga Museum uses life-size wax figures to depict medieval Icelandic life.

In addition to the museums, there are small art galleries and studios dotted all around the city, many of which are open to the public and great places to find unusual souvenirs to take home. 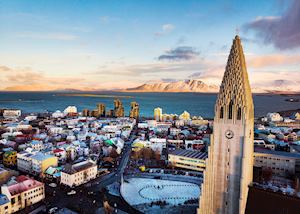 The city’s most striking landmark is the Hallgrímskirkja, the largest church in Iceland. Set on a hilltop, its unusual white-concrete design reflects the angular columns of volcanic basalt seen in many parts of the country. The columns rise to a soaring central tower, which can be reached by elevator and offers panoramic views of the city.

The church was designed by local architect Guðjón Samúelsson and took 40 years to build. Inside, it’s simple and serene, but is at its best during the regular choir concerts and organ recitals held here between June and August.

Just south of the city, Perlan is a huge glass dome sitting over a series of giant water tanks. The building houses the Wonders of Iceland exhibition, where you can find out about glaciers, ice caves, volcanoes and earthquakes through high-tech interactive displays. There’s also a planetarium with shows explaining how the northern lights are formed.

An observation deck outside offers ocean and mountain views, while a network of walking and cycling trails lead across the hillside and down to the Nauthólsvík geothermal beach where, in summer, geothermal water heats a man-made lagoon and hot pool.

Reykjavík is Iceland’s main visitor hub and offers a wide range of activities and tours that get you out into the surrounding countryside. Even if you’re short on time, it’s possible to take a Superjeep ride to age-old glaciers to hike on the ice or visit an ice cave. You can go whale watching or see puffins during the summer months or take a northern lights tour in winter.

If you’d prefer to discover the city in more depth, you can join a guided tour of Reykjavík on foot, exploring its food and drink or cultural highlights with a local guide.

Although Reykjavík’s weather is still cool and unpredictable between May and August, the long daylight hours make it a great time for touring. Come in May for the three-week Reykjavík Arts Festival, in August for Menningarnótt (Culture Night), or September for the Reykjavík International Film Festival (RIFF). Between September and early April, the northern lights make frequent appearances, and in mid-winter, the streets are lit with festive lights and offer big celebrations for New Year.

Our itineraries will give you suggestions for what is possible when you travel in Reykjavík, and they showcase routes we know work particularly well. Treat them as inspiration, because your trip will be created uniquely by one of our specialists.

Our expert guides to exploring Reykjavík

Written by our specialists from their own experiences of visiting Reykjavík, these guides will help you make the most of your time there. We share both our practical recommendations and the best ways to appreciate Reykjavík at its best.

We’ve selected a range of accommodation options for when you visit Reykjavík. Our choices usually come recommended for their character, facilities and service or location. Our specialists always aim to suggest properties that match your preferences.

Our specialists seek out authentic ways to get to know the places that could feature in your trip. These activities reflect some of the experiences they've most enjoyed while visiting Reykjavík, and which use the best local guides.