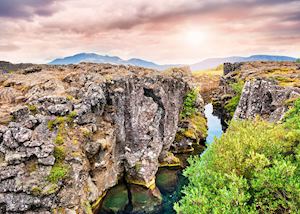 Just south of Almannagjá, Þingvallavatn is Iceland’s largest natural lake. Here, both snorkellers and divers can sink into glacial waters between the two tectonic plates. Above ground, the Öxará River tumbles off the edge of the North American plate in a series of waterfalls, the most striking of which is Öxarárfoss.

The dramatic clash of continents was noticed by Iceland’s first settlers, and the natural amphitheatre here was used by Icelandic chieftains for their most important meetings. This was the original site of the Alþing — Iceland’s General Assembly and arguably the oldest parliament in the world. Local leaders met here to settle disputes and discuss laws and trade from 930 AD right up until 1798 when the parliament relocated to Reykjavík. 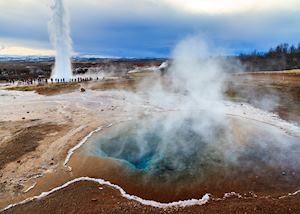