Mauritius’s coastline is arguably best viewed from the deck of a boat, where you can see the silvery sands stretching into the distance, the Black River Mountains rising above. There are various boat trips available across the island, from short trips out to the reef to longer full-day excursions.

From the west, you can sail along Black River Bay, with views across Piton de la Rivière Noire and Le Morne. An almost cubic rock that juts dramatically up from the flat peninsula off Mauritius’ southwest coast, Le Morne was used a shelter for runaway slaves in the 18th century. It’s common to see pods of dolphins streaking through the water and surfers riding the waves nearer the coast.

To the north, you can head out toward the scattering of islands that dot the ocean beyond the reef, including Gunner’s Coin, Flat island and Ilot Gabriel (although this area can get busy). Boat trips often stop at the islands for time to snorkel and wander along the beaches — you can walk around deserted Ilot Gabriel in under an hour.

Along the east coast you can visit Blue Bay Marine Park, one of the island’s best snorkelling sites and sail around the Vieux Grand Port, the location of the only naval victory of Bonaparte in 1810. Stopping to visit some of the tiny east islands, you can island-hop between Ile Aux Flamants and Ile de La Passe, stopping for a barbecue lunch on Ile Aux Cerfs.

Full-day boat trips usually include food and an on-board fridge filled with drinks. You’ll stop for lunch on a beach or smaller island for a freshly-barbecued lobster lunch.

Photos of Boat Trips Around Mauritius 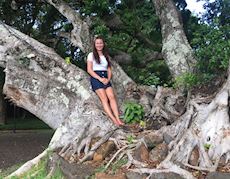