Snorkeling and Diving in Mauritius

Mauritius is surrounded by a halo of coral which protects many of its bays and coves (particularly on the east coast). This creates a series of placid lagoons and shallows where you can snorkel in calm, clear waters where the fish aren’t hard to find. Divers can explore an underwater seascape of caverns and arches created by ancient lava flows.

In some areas you can snorkel from the beach, where you might catch a damselfish or clown fish passing by. But, the best snorkeling is a ten-minute boat ride out to the reef that curves around the island. Some hotels run complimentary boat trips, where you’ll be given around an hour to swim around the reef before returning to shore.

The visibility isn’t quite as good as the Maldives, but it’s close. You’re likely to see a scattering of flamboyant tiger fish and needlefish while shoals of bluestripe snapper shimmer past. Experienced snorkelers can swim over to the deeper, ocean-side of the reef where you might see the occasional shark, turtle or pod of dolphins.

The sleepy east side of Mauritius tends to offer the best snorkeling. One of the most popular areas is around the private island of Île aux Cerfs, but it can get busy. Head further down the coast and you’ll find the quieter Blue Bay Marine Park. The first Mauritian marine park, you can take a boat trip into the bay which has some of Mauritius’ healthiest coral. More than 30 species of coral have been documented here in an ongoing effort to help the island’s coral regenerate.

Divers are spoilt for choice with a range of dive sites. There are a number of well-reputed dive schools across the island and many hotels have their own PADI instructors and equipment. The north and west coasts are generally considered to have the most interesting sites which range from dramatic oceanic drop-offs to drift dives and shipwrecks.

The volcanic typography has created caverns, grottoes and tunnels to explore including The Cathedral near the coastal town of Flic en Flac. This huge underwater cave is lit by shafts of light coming through gaps in the rock above, creating an atmospheric, sandy-bottomed space that’s often filled with angelfish, gropers and the occasional dolphin. 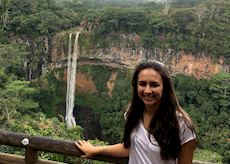