For many, Nepal is characterised by the presence of the Himalaya and the amazing opportunity they present to walkers and trekkers. Our knowledge extends beyond the mountains and into the lowland Terai, the terraced foothills of the Kathmandu Valley and the jungles of Chitwan National Park, home to an array of wildlife.

A stay of two weeks is perfect for sightseeing though trekkers may prefer extra time to undertake longer routes. Alternatively, we can arrange four or five-day trips from India, the overland route from Tibet or include Nepal en route to Bhutan.

In Kathmandu you will find an extensive range of accommodation, from international five-star hotels offering a wide range of facilities to small and intimately run local guesthouses.

The traditional tea houses in the Annapurna and Everest regions provide simple yet very hospitable accommodation for trekkers, offering fresh and revitalising Nepalese food for a day on the trail, while more luxurious options are on hand for those seeking a more pampered stay.

In the national parks there are lodges of varying standards where you can enjoy jungle living with the local naturalists.

The official language is Nepali. There are many other languages, including Maithili and Bhojpuri. English is spoken for business and by people involved in tourism.

Nepal has not developed a distinctive style of cooking. Food usually consists of lentils and rice, Dal Bhat which may also be eaten with goat, buffalo or chicken. An exception is Newar cuisine, which can be very elaborate and spicy. Dishes include spiced vegetables, chapatis and tsampa (eaten by the hill people), which is a raw grain, ground and mixed with milk, tea or water. Sweets and spicy snacks include jalebi, laddus and mukdals. Regional dishes include gurr, a Sherpa dish of raw potatoes, pounded with spices, then grilled like pancakes on a hot, flat stone.

There is a wide selection of restaurants only in Kathmandu and Pokhara. Government tax is added to bills.

All tap water, including when brushing teeth, should be regarded as being potentially contaminated. Only eat well-cooked meat and fish, preferably served hot. Pork, salad, uncooked vegetables, fruit without peel and mayonnaise may carry increased risk.

Restaurant staff — tipping is only usual in tourist hotels and restaurants where a service charge isn't already included so add 10%.

It is illegal to exchange currency other than with authorised dealers. Obtain and keep Foreign Exchange Encashment Receipts when changing currency. Hotel bills must be paid in foreign currency.

American Express is widely accepted; MasterCard and Visa in tourist shops, hotels, restaurants and agencies; travellers' cheques at banks and major hotels (choose USD or GBP); cash only when trekking.

The following are some local conventions it is advisable to adhere to: never step over the feet of a person — always walk round. Never offer or accept anything with the left hand, use the right or both hands.

It is rude to point at a person or statue with a finger (or even with a foot). Shoes and footwear should be removed when entering houses or shrines. Do not stand in front of a person who is eating as this means your feet will be next to his food: squat or sit by his side. Local Chorten and temples should be passed by in a clockwise direction. Small flat stones with inscriptions and supplications next to the Chorten should not be removed as souvenirs. Shaking hands is not a common form of greeting; the normal greeting is to press the palms together in a prayer-like gesture, give a slight bow and say 'Namaste' which means 'respect the God within you'.

A gift given to a host or hostess will probably be laid aside unopened; to open a parcel in the presence of a guest is considered uncivil. Overt public displays of affection, especially near religious places, are inappropriate.

When to go to Nepal

You'll find temperature and rainfall information, together with a month-by-month guide on visiting, on our guide for when to go to Nepal. 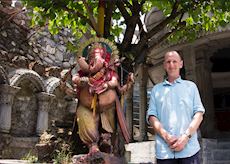 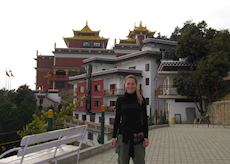 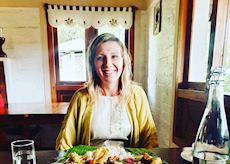