In the space of just a few days, you can travel from green mountain pastures to a land of desert, punctured by some of the most arrestingly designed Islamic architecture you might ever set eyes on.

Your journey along the Silk Route will be by no means luxurious ― but with sacrifices come immense gains. The hotels will be far from the best you’ve ever stayed in, and the food can be underwhelming. But, I think the scenic and architectural riches you’ll be exposed to more than make up for this.

You can travel the route in full, starting in China, or cherry-pick the parts you’d like: I suggest zooming in on Central Asia, taking in primarily Kyrgyzstan and Uzbekistan. It’s even possible to see the best of Uzbekistan in 11 days.

What was the Silk Route? 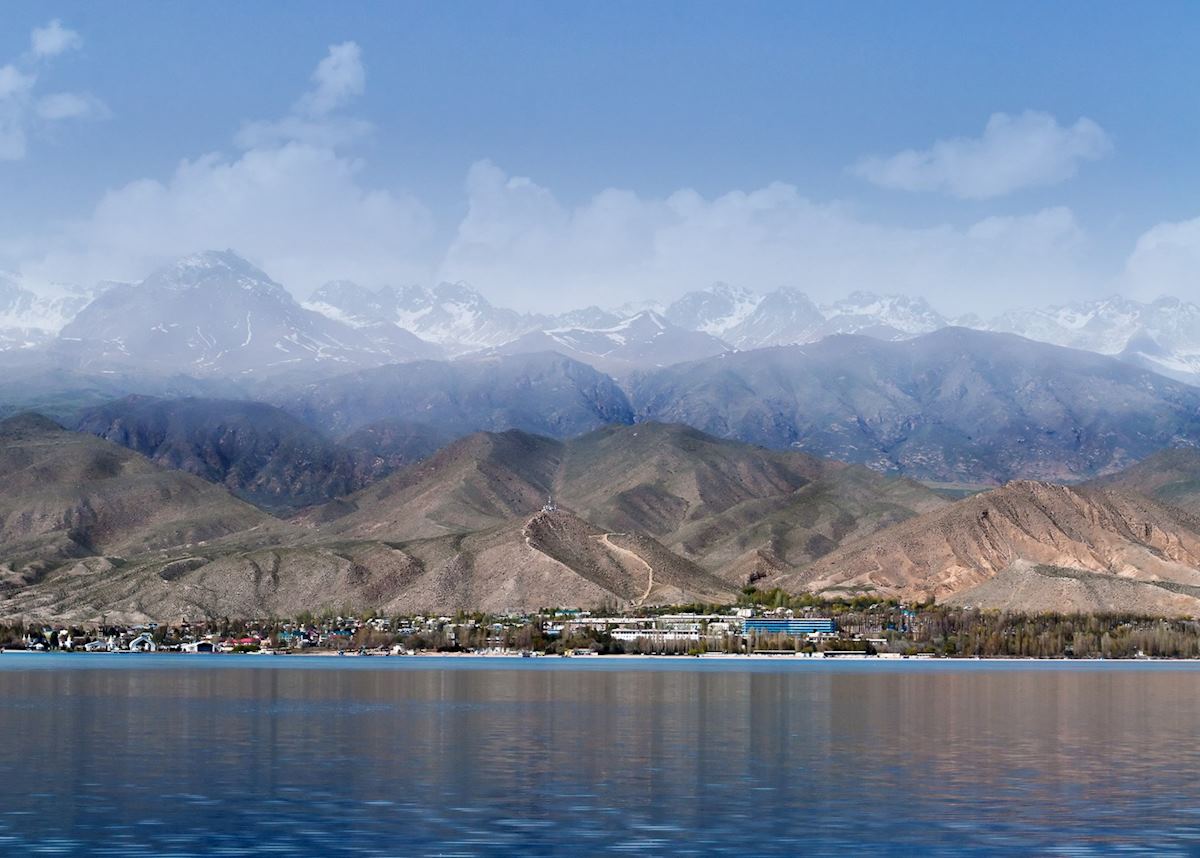 The Silk Route was actually a network of trading routes rather than one long road. Its roots stretch as far back as 207 BC, when silk was first produced in China and transported for trade. It eventually grew to link Asia, the Middle East and Europe, branching off into the Indian Subcontinent and Russia.

Silk Route trade didn’t stop at silk. Goods, from spices, teas, salt and sugar, to ceramics, ivory, jewels and furs, were shuttled back and forth as countries discovered new items produced in far-away lands. Less tangible exchanges also took place: ideas, languages, cultural practices, religions and even diseases were passed on between traders.

How to tackle the Silk Route

Some Silk Route itineraries will have you begin in Beijing and end in Tashkent, Uzbekistan, voyaging the width of China and Kyrgyzstan en route. But, I'm going to rip up the rule book and suggest that you focus your efforts on Central Asia.

For us, it’s the most intriguing section, full of juxtapositions. You’ll go from Kyrgyzstan’s mountains, lakes and plains to wide-open desert. From lakeside yurt camps to spindly minarets, and from relatively relaxed Kyrgyzstan to religiously conservative Uzbekistan and to the highly regulated bubble of Turkmenistan’s dictatorship.

The route I suggest starts off with a flight into Almaty, capital of Kazakhstan. You then cross overland into Kyrgyzstan, one of the most scenic drives of the trip (more on that shortly). From Kyrgyzstan you journey through Uzbekistan, hopping briefly into Turkmenistan before heading back over the border and beginning your homeward journey from the Uzbek city of Khiva. 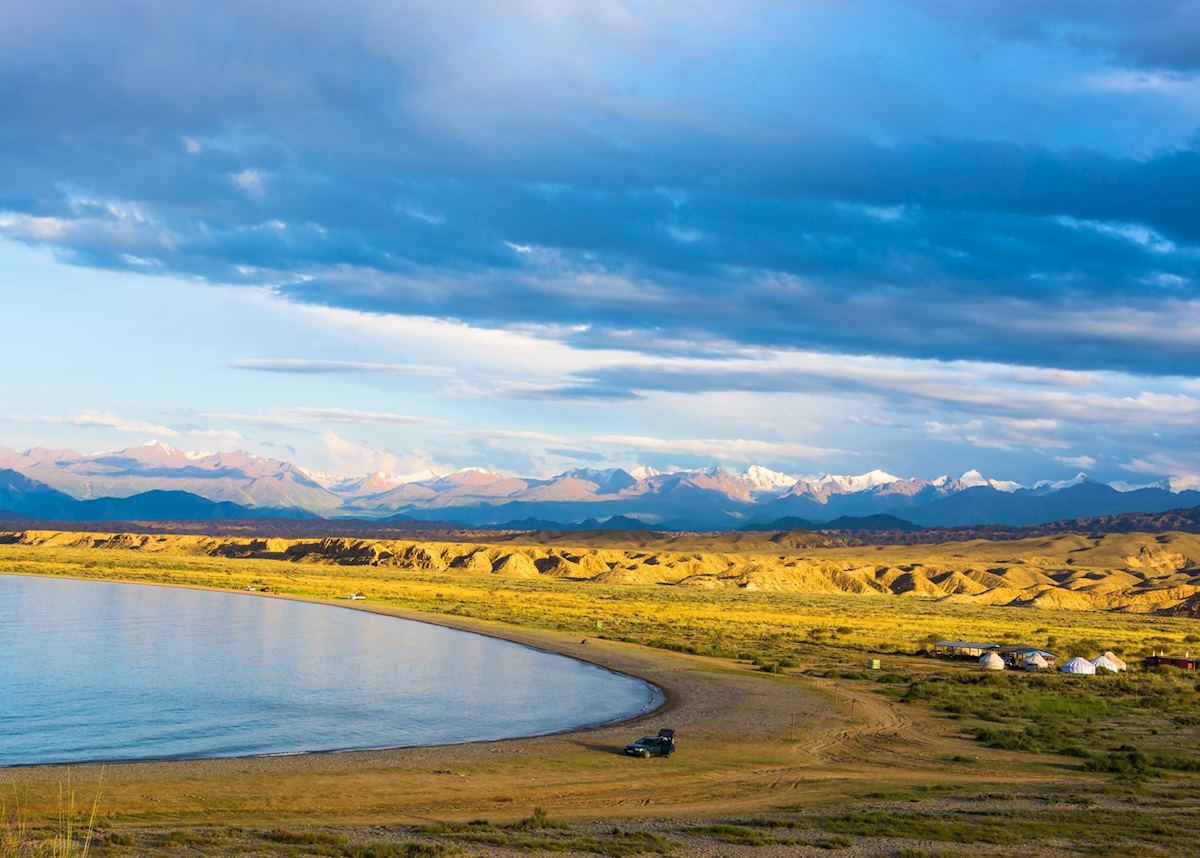 The Silk Route throws up particular challenges. We’ll always try to make it as manageable as possible for you, though, and I think the rewards of experiencing this region more than make up for the snags you might encounter while visiting it.

Here are some quirks to be aware of: 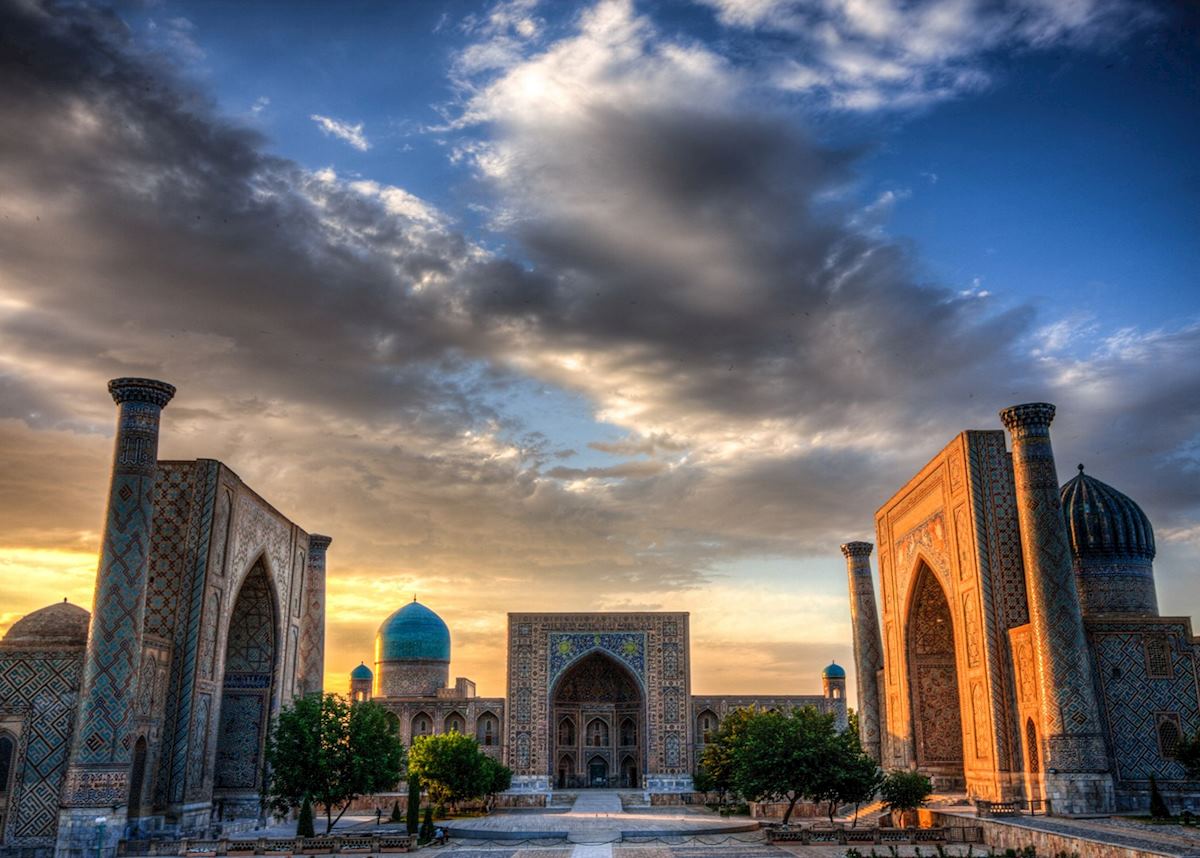 Crossing overland from Kazakhstan to Kyrgyzstan

Almaty, Kazakhstan is your starting point. Not because it has any intrinsic interest (in fact, it’s all a bit gauche: even the mountains overlapping the city are ablaze with branding and billboards) but because from here you can easily access the best bits of Kyrgyzstan.

It’s a full-day drive that takes you through both bucolic hills and the snaking red-rock corridor of the Charyn Canyon, which looks in places like a copycat version of the Grand Canyon.

The border crossing over into Kyrgyzstan is unusually straightforward ― just a chain-link fence and a couple of young officials sporting the biggest hats you’ve ever seen.

Vivid-green steppe grasslands, lake-filled alpine valleys and sky-punching mountains… Kyrgyzstan has an untamed beauty. There’s something rather Wild West about it all.

Horses are a big part of life here, and you’ll see everyone astride them ― even toddlers. Hunting with eagles is equally a local discipline, and we can arrange for you to watch a demonstration. You can also stay in a yurt camp, waking to a view over lakes and mountainsides.

Kyrgyzstan’s other calling card is its hiking. You can walk among wildflower meadows, snowy mountainsides, and glacially carved valleys ― and there’ll hardly be another soul in sight. Choose from eight-hour-round hikes or gentler half-day options, skipping some of the ascents by jumping in a 4x4. Guides accompany you every step of the way.

What to see in Uzbekistan: mosques, minarets and madrasas

Fly from Kyrgyzstan’s capital, Bishkek, to Tashkent, a city where Islamic religiosity rubs alongside Soviet tower blocks. As soon as you step off the plane, the topographical contrast with Kyrgyzstan is startling: you’re now among flat desert.

As you explore, you’ll see how Uzbekistan feels more developed as a country and better set up for overseas visitors than Kyrgyzstan. There are more pedestrian-only areas, major sites are lit up come evening and restaurants occupy every street corner.

Search for Uzbekistan online, and you’ll find images showcasing the country’s intricately decorated mosques, madrasas and public squares. In places like Khiva, Bukhara and Samarkand, their blue domes and patterned mosaics stand out against the surrounding sand-toned structures.

Some of the finest examples can be seen at Samarkand’s Registan, which you can visit by train from Tashkent. This centuries-old public square sits at the heart of the city and has played host to royal announcements, public executions and important ceremonies over the years. It’s framed by three large madrasas: Tilya-Kori, Sher-Dor and Ulugh Beg.

Built between the 15th and 17th centuries, the madrasas have towering minarets rising on both sides, huge domes, and archways that are symmetrically decorated with bright tiles. Guides point out the significance of the Sher-Dor’s decoration: it uses images of tigers, despite the general rule in Islam that living beings shouldn’t be depicted on religious buildings.

Make sure to return to the square at night, when local families come to mill about, and the madrasas are subtly illuminated against the night sky.

From here, you travel on to Bukhara. You can climb the gigantic, still-intact portion of The Ark, a fortified citadel where British emissaries Stoddard and Conolly were executed during the years of the ‘Great Game’. Then, nose your way through souq-like markets and ascend the Kalon Minaret for panoramas over the city.

The whole city has a more languid feel than Samarkand, and you don’t have to wander far on foot to see unpaved gravel backstreets that look much like they did during the Great Game years.

What to see in Turkmenistan: ghost cities, gas spectacles and a glimpse at life in a dictatorship 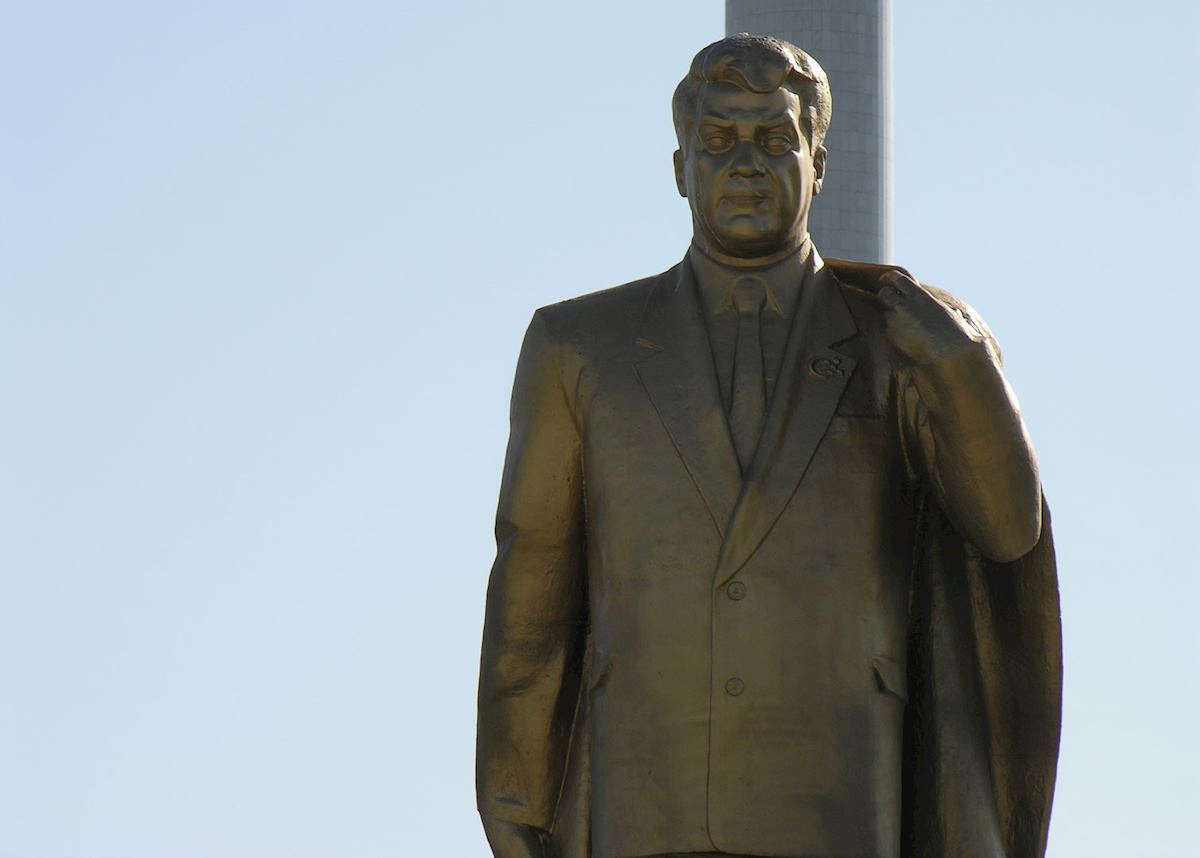 From Bukhara, it’s an hour’s drive to the Turkmen border, a two-hour border crossing, and then a four-hour drive to Merv. A long day, but you can wake up the next morning to explore these completely unrestored, ghostly and weather-beaten ruins in the middle of the desert.

A once thriving Silk Route town before Genghis Khan set his sights on it, it’s a place of untouched citadels and adobe mounds. It’s how parts of Uzbekistan would look had they not received a facelift, nor witnessed any Soviet influence.

What I like about Merv is that there’ll only be about ten other visitors there, if that ― it redefines the meaning of off-the-beaten-track.

From here, it’s a four-hour drive to the capital, Ashgabat. A city of white marble buildings, it hosts a cult of personality dedicated to the president: a gold statue of him once rotated to face the sun. Foreign internet and mobile sites, as well as non-state TV channels, are banned.

You can explore, with your guide, the city’s prized carpet shops and its old Russian quarter. I also recommend enjoying the comforts of your hotel: it’s one of the few plush ones en route, with a swimming pool and bar.

Our advice is to revel in this luxury while you can: for the next day, you’ll be taking a long overland drive through the desert to the Darvaza Gas Craters (purposely lit in the 1970s, and still burning bright).

It’s a real adventure ― just you, your guide, your desert campsite, the stars, and the fiery mouths of the craters. There’s no commerce around the site, for the moment. Your driver will cook a decent barbecue, and there may well be vodka passed around.

From Darvaza, you drive to the Uzbekistan border, where you’re treated to more ruins, Kunya-Urgench ― a decaying cluster of mosques, fortresses, minarets, mausoleums and a caravanserai, some dating from as early as the 11th century. If you’ve already been to India and you think these structures look familiar architecturally, you’d be right ― they went on to inspire Mogul Empire creations.

Uzbekistan: there and back again

After crossing the border, it’s a half-hour drive to Nukus, where you can visit the Savitsky Collection, one of the world’s best (yet least-known) avant-garde art museums. It includes once-banned pieces smuggled out of Stalinist Russia. On a less lofty note, the cafe opposite the museum does very good coffee and cake.

From here, you drive on to Elliq-Qalas, great sandstone fortresses soaring up from the sand out of nowhere. They’re part of Alexander the Great’s legacy ― a fittingly mighty finale to your trip.

Then it’s onto to Khiva, a city of (you guessed it) more madrasas and mosques. They’re covered in elaborate majolica and azure patterns. From Khiva you fly back to Tashkent to begin your homeward or onward journey.

As you’re covering a vast area, it’s hard to travel at a time when everywhere is at its best. I recommend taking a trip along the Silk Route between April and early June or September and October, when it’s warm but not uncomfortably hot like it is between late June and August. That said, cars (especially in Turkmenistan) are of decent quality and have air conditioning.

If you’re particularly interested in driving over the high-altitude passes in Kyrgyzstan, postpone your trip until June to avoid the spring snows. 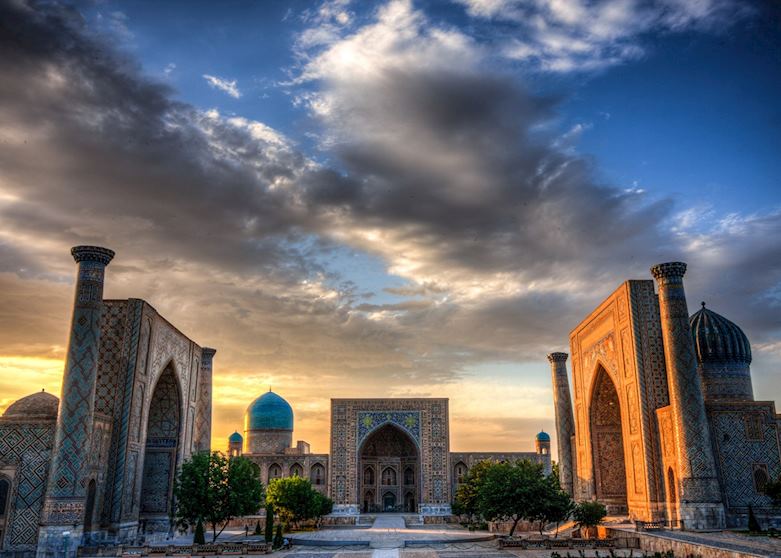 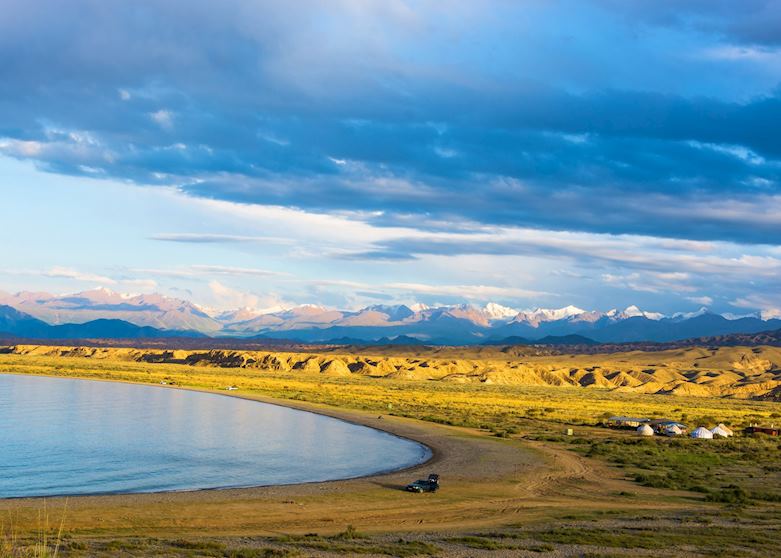 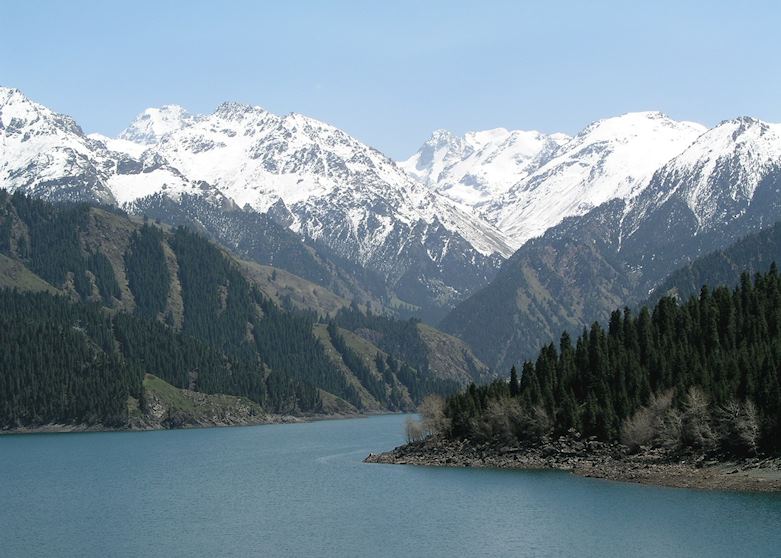