With its long history evident in Ming-era palaces and temples, juxtaposed with modern skyscrapers and cutting-edge architecture, Beijing is a microcosm of China’s stark contrasts and contradictions. At the heart of it all is the Forbidden City, a vast complex of palaces, gardens and halls dating to the 15th century, once only accessible to emperors and their families. On the outskirts of the city are peaceful gardens where, as you stroll among the trees, you come across traditional halls and temples.

Modern-day Beijing is on show in the bustling markets selling electronics, gaudy trinkets and deep-fried crickets. Meanwhile, admiring the sleek design of the Olympic Park’s buildings is like glimpsing the future.

Beijing is a true example of old and new China. Learning about its history brought home to me the incredible changes the city has undergone, from the time of the Tang dynasty all the way to present day.

Things to see and do in Beijing

The Great Wall of China skirts contortedly around the northern edge of Beijing. Certain sections of the wall become busy with coach parties and domestic tourists, particularly those closest to the city. We recommend taking a two-hour private car journey to the quieter section at Jinshanling, around 130 km (80 miles) northeast of the city. Much of the wall here is original, featuring a complete defensive system including barrier walls, watchtowers, battlements, gun emplacements and shooting holes.

As you stroll along the wall at your own pace, taking in sweeping views of the surrounding hills, your guide tells you about its construction and tales from its past. The lack of other people means it’s easier to take photographs and you’re able to enjoy a more personal experience. After your walk, you can take a 15-minute cable car ride down from the wall for a different perspective.

The Temple of Heaven 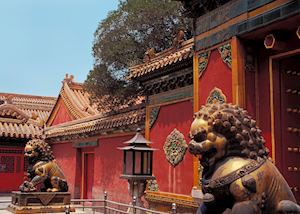 The vast Temple of Heaven complex in southeast Beijing was built between 1406 and 1420 for the use of Ming and Qing dynasty emperors during their annual prayers for a good harvest. A visit to the temple’s three main buildings with a private guide gives you an insight into Chinese history, religion and Ming dynasty architecture.

The huge park at the temple’s entrance serves as a communal leisure space for local people. Visiting early in the morning, you can watch them dancing, fencing, flag waving and practising the traditional art of t'ai chi. We can also arrange for you to take a private class in this centuries-old pastime with a t'ai chi master. You’ll learn some of the basic movements and techniques used to calm the body and mind.

The Forbidden City and Palace Museum

Consisting of 980 buildings dating back to between 1406 and 1420, the Forbidden City was home to 24 emperors across the Ming and Qing dynasties. For 500 years, the vast complex was off-limits to all but the current ruler and his family.

Today, you can visit the palaces, gardens, halls and living quarters of China’s past rulers. Red and gold dominate the buildings, which were built in a traditional style with large, wide roofs, enclosed courtyards and precise symmetry. Inside, you can admire intricate wood and marble carvings.

The Palace Museum is made up of 90 palaces and courtyards within the Forbidden City. It holds extensive collections of relics retrieved from the site, from paintings and ceramics to jade stone necklaces and everyday items used by the Forbidden City’s former residents.

The entrepreneurial spirit of the Chinese shines through in Beijing’s many markets. On sale is anything from traditional wood carvings and herbal remedies to modern electronics and fake designer handbags.

Panjiayuan Antiques Market is an authentic flea market of around 3,000 stalls. The market mostly caters to the local populace, so you’re under less pressure to buy. With such a mix of items on offer, you could be looking at Ming-style carved wooden furniture at one stall before turning a corner to find Tibetan artwork, old coins or political posters at another.

Wangfujing is one of Beijing’s most renowned shopping areas, and many of its night markets focus on selling street food. Browsing Donghuamen Night Market in the northern end of the district, you’ll come across delicacies such as candied fruits and dumplings, and deep-fried crickets, scorpions and centipedes. 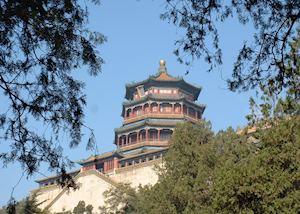 Situated in northern Beijing’s Haidian District, the Summer Palace feels a world away from the city with its landscaped gardens, lake and temples dotted among trees.

While the site’s royal origins date back to the 12th century, the current palace and grounds were created during the 18th-century reign of Emperor Qianlong as a summer residence. Around 100,000 workers dug out Kunming Lake, which makes up three quarters of the grounds. The excess soil was used to form the 60 m (200 ft) high Longevity Hill.

Visiting today, you can admire the traditional architecture of the intricately decorated palace buildings while your guide relates the site’s history. A highlight is the 700 m (2,297 ft) ‘Long Corridor’, a covered walkway decorated with scenes from Chinese mythology.

Lining the water’s edge are traditional shops and teahouses you can browse. Climbing Longevity Hill, you’ll pass traditionally styled halls, gates and temples and, at the top, look over panoramic views of the lake.

From as early as the medieval Yuan dynasty, Beijing’s residents lived in adjoining houses connected by a labyrinth of narrow lanes and courtyards, known as hutongs. Many have since been destroyed, but some have been protected and still stand. They provide a stark contrast to the grand palaces and manicured gardens of China’s rich and powerful.

You can head out with a guide on foot or join a tricycle tour of these historic lanes. Your guide will divulge the hutongs’ history and point out features such as the gate decoration once used to indicate a family’s status and door knockers embellished with dragons.

Close-knit communities are still formed within the hutongs. As you wind down the lanes, you might notice residents gossiping and children playing, see the public bathrooms they share, and come across local shops.

A more hands-on way to delve into the hutongs is through a cooking class or guided street-food breakfast tour. Cooking classes start with a visit to a local supermarket, where your guide will introduce you to some of the common ingredients used in Chinese cuisine, before your cooking class proper. This takes place in a private kitchen sequestered away in a traditional hutong courtyard home.

Meanwhile, street-food breakfast tours lead you around a tight grid of hutongs. You stop off at various stalls and small cafés to grab jianbing (similar to crêpes), youtiao (fried dough sticks dunked in soy milk), and fried pork dumplings, among many other dishes. En route and mid-munch, your guide tells you about breakfast food in Beijing, and offers titbits about Chinese food culture in general.

Set at the foot of the Western Mountains in Beijing’s Haidian District, Fragrant Hills Park is an imperial garden established in 1186 and later expanded during the Yuan and Ming dynasties. Brightly decorated temples and halls scatter the landscape. The hills are covered with maple, smoke and persimmon trees whose leaves turn fiery red and burnt orange in October and November.

The park seems more suited to rural China than the outskirts of Beijing. There are several walking routes you can follow with your guide. One follows the north side of the park, past a small lake and several temples including the Tibetan-style Bright Temple complex.

Another explores the south, passing Tranquility Green Lake and Fragrant Temple and winding up to Incense Burner Peak, the park’s highest point. You can also take a cable car ride across the park for bird’s-eye views.

Set in the grounds of what was once a 16th-century imperial court and eunuch house, this Tibetan lamasery is Beijing’s standout Buddhist temple. You walk through gates and up a wide pathway lined with ginkgo trees to reach a series of halls, each housing a different shrine. Prayer flags flap from poles, and the air is heavy with incense wafting up from burners.

No matter what time of day you visit, you’ll likely see devotees bowing and muttering prayers or devotions, and perhaps a yellow-robed monk or two. Inside the halls are statues of Buddha in varying sizes, but the whole complex is dotted with intriguing objects and devices used in Tibetan Buddhism. A separate museum area displays objects such as ritual daggers, mandalas, robes, prayer wheels and tantric statues. 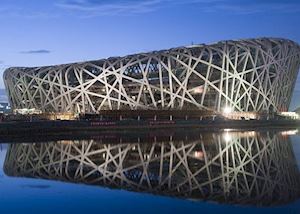 The 2008 Beijing Olympics shed a new light on the city and China as a whole. The venue’s modern architecture showed how much China has developed over the last few decades. You can now visit the Olympic Park with a guide to admire its futuristic buildings and learn about their design.

You’ll see the National Stadium (or Bird’s Nest), with its distinctive twig-like structure wrapping around its bowl-shaped roof. Also on the tour is the National Aquatics Center, or Water Cube, a blue box-shaped building covered in semi-transparent ‘bubbles’.

We recommend heading to the top of the 250 m (820 ft) Olympic Park Observation Tower. Built in 2014, its design was inspired by blades of grass. From its open-air deck, you can gaze over the park and southern Beijing on a clear day. Or, look down through the partially glass floor to see the ground far below.

September is considered the best time to visit, when the heat and rains of the summer have subsided. Daytime temperatures are still warm, while nights are cooler. May is also a popular time as temperatures are pleasant but not yet hot and humid. November is the best time to see the seasonal foliage. In December and January, temperatures are cold and snow is possible, but there are fewer visitors. Domestic tourism during the national break in early October results in price rises and busier sites. 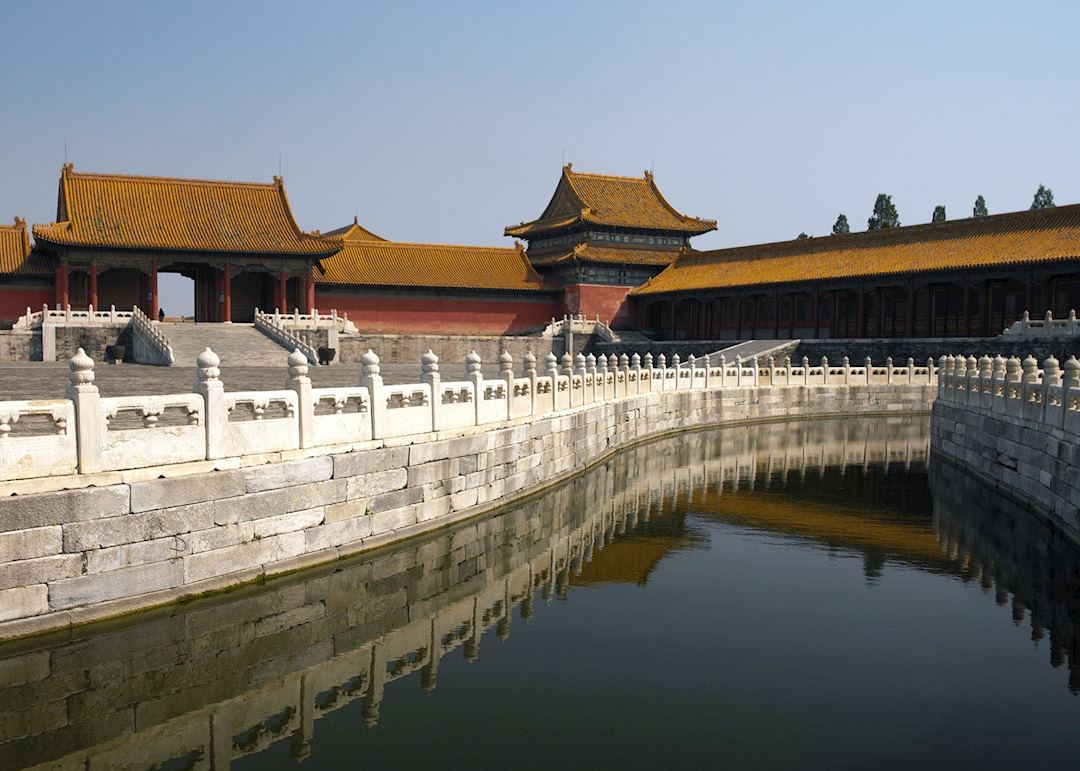 Start planning your trip to Beijing

Our expert guides to exploring Beijing

Written by our specialists from their own experiences of visiting Beijing, these guides will help you make the most of your time there. We share both our practical recommendations and the best ways to appreciate Beijing at its best.

We’ve selected a range of accommodation options for when you visit Beijing. Our choices usually come recommended for their character, facilities and service or location. Our specialists always aim to suggest properties that match your preferences.

Our specialists seek out authentic ways to get to know the places that could feature in your trip. These activities reflect some of the experiences they've most enjoyed while visiting Beijing, and which use the best local guides.