By Jess, a member of our Portugal team

Remote and unspoiled, the Azores have been called the Galapagos of the Atlantic or the Hawaii of Europe. While the islands are also excellent destinations for hiking and outdoor adventures, those monikers aren’t quite accurate. Located a bit closer to Portugal than North America, the Azores boast a more diverse array of landscapes than the comparisons suggest.

You can see deep-green fields bounded by bright-blue hydrangeas, conical volcanoes and twin caldera lakes, one azure and one emerald. You can explore all of this either during an in-depth visit to the islands or as an easy addition to a Portugal trip.

All the islands in the archipelago have chromatic nicknames and São Miguel is known as the green island for its vividly verdant countryside. This is the Azores’ largest island, home to fully half the population.

The capital, Ponta Delgada, has a visually striking historic core. The low buildings are mostly built out of local black volcanic stone that contrasts starkly with the gleaming whitewash of the traditional Portuguese façades. If you’d like to learn more about the capital’s history, we can arrange a guided walking tour that also includes the city’s covered Mercado da Graça.

But the island’s real attraction is its pristine landscapes, including Sete Cidades, a forested caldera with twin lakes at the bottom, one green and one blue. It’s just a 40-minute drive northwest of Ponta Delgada, and you can take a half-day guided tour of the area.

My guide to Sete Cidades was Tiago, a tall and irreverent man with short dark hair and a blindingly white smile. He grew up on São Miguel and his passion for his home came through as he led me around.

We started on a bicycle, something I hadn’t done in more than a decade. Despite the saying, it took me a few minutes to get my bearings and Tiago patiently helped me, with only gentle teasing. Then we set off for a path that circled the lake.

As I wobbled along, fumbling with gears, I was grateful that the path around the lake is along mostly flat ground. After a few minutes, though, I could appreciate the lush landscape and compare the different shades of glimmering blue and deep green. Tiago told me some of the myths that have grown up around the area, including sailors’ stories about seven disappearing islands that gave the place its name.

After you’ve circled the lake, you’ll climb into a 4x4 for the drive through the dense forest and up to the rim of the caldera. It’s a tricky route, up narrow switchbacks on a dirt road made uneven by tree roots, and I was glad Tiago was driving instead of me.

The edge of the caldera’s cliffs offers a sweeping view… on a clear day. However, the area is known for its sudden and impenetrable fog and by the time we emerged from the tree cover, all I could see was a misty-white sea of fog that left a sparkle of dewdrops on the bright-green leaves around me. ‘The lakes are still down there,’ Tiago assured me, with a grin.

Though the islands now belong to Portugal, they were originally settled by both Portuguese and Flemish pioneers. The Flemish brought with them hydrangeas that still flourish across all the Azores. Faial is blessed with an abundance of the bushes, which bloom vivid shades of cornflower, azure, sapphire and cobalt, giving it the nickname the blue island.

You can visit Faial as a day trip from nearby Pico or spend the night here. The highlight is Capelinhos, one of the world’s youngest volcanoes, which rose from the water offshore in 1957 and erupted irregularly for more than a year, spewing incandescent lava and grey ash into the air.

There were no fatalities, but the closest village was covered in ash and pumice stone. On a guided tour of the island, you’ll see the ridgeline of the roofs where they’re slowly emerging from the hard-packed soil. A half-buried lighthouse today houses the Capelinhos Volcano Interpretation Centre, which explains the geological import of the volcano as well as the social effects that the eruption had.

The tour of the island ends at Peter’s Café Sport, a historic bar in Horta. The original owner was a pillar of the community, delivering letters, matching workers with jobs, and even changing money if you couldn’t get to the banks, a tradition that his descendants maintain to this day.

The main bar is plastered in bright yachting flags, dog-eared postcards and other gifts left by visitors who come to enjoy both the hospitality and the gin and tonics, which are exceptional. Upstairs, you can see the single largest private collection of scrimshaw in the world.

Just a 30-minute ferry ride from Faial, Pico is the grey island, a nod to the volcanic nature of its geology, courtesy of towering Mount Pico. This photogenic stratovolcano is Portugal’s tallest mountain and its many eruptions have covered the island in long twisting ropes of hardened lava flows, known locally as mistérios.

Sicilian monks, who know a thing or two about growing grapes in volcanic soil, were the first to take advantage of the abundant stone and used it to build walls that still provide thermal buffer for the vineyards. The stone walls not only block ocean winds, they also absorb the heat of the sun during the day and keep the vines warm at night.

Today, the island is known for its wine production and you’ll see vast grids of the omnipresent grey stone covered in dense tangles of grape vines, a landscape that was designated a UNESCO World Heritage Site in 2004.

If you want to sample Pico’s unusual vintages and learn more about its history, I suggest a guided tour of the island that ends at a local wine-growing cooperative that supports the island’s growers.

After a tour of the facility, I got to enjoy a tasting that included a sample of Pico’s premier wine: Frei Gigante. The wine is named after the island’s (probably) apocryphal original monk, an oversized brother named Pedro. Crisp, light and refreshing, it boasted a floral bouquet and notes of citrus.

São Jorge is named after the fabled dragon slayer because, if you cock your head to one side and squint a bit, the ridge of volcanoes that runs down the island might look a bit like a dragon’s spiny back. It’s also known as the Brown Island thanks to the high weathered cliffs that soar up, dun brown and russet red, from the blue ocean.

There’s not much to this tiny island, but it’s a pleasantly low-key destination for a day trip from nearby Pico and its high cliffs offer a view of the volcanoes. But I’ll admit that the views aren’t why I visit São Jorge.

For me, it’s all about the cheese.

Cattle outnumber humans two to one on São Jorge. Made happy by the grand buffet of lush pastures, they (the cows, not the people) produce a rich milk that’s the basis of a DOP-protected cheese known as queijo São Jorge.

It’s made in large wheels and features a firm, slightly crumbly texture that’s riddled with tiny holes. In taste, it falls about halfway between a well-aged Cheddar or a very mellow Parmigiano Reggiano, with that same salty burst of crystalline richness. You can sample variations on the local cheese as part of a guided tour of the island.

Terceira has two claims to fame: its gloriously lavender sunsets and its residents’ remarkable fortitude. During the Portuguese Civil War in the 1800s, the capital city singlehandedly fought off a Miguelist attack, earning the title Angra do Heroísmo — heroic port — from the queen.

For a brief period during the War of the Portuguese Succession, Terceira was the only bastion of Portugal that hadn’t been invaded by Spain. The islanders fought off the Spanish forces by driving herds of half-wild bulls towards the landing parties — the enraged animals trampled and savaged the invaders. To this day, a bull motif is very popular across the island, including a remarkable statue that looks like nothing so much as a fountain of bulls.

Angra do Heroísmo is perhaps the most attractive city on the archipelago, with narrow cobblestone streets twisting between low whitewashed buildings with terracotta-tiled roofs.  A walking tour will introduce you to the outsized history of this small city, which has been designated a UNESCO World Heritage Site.

Away from the capital, you can explore the rugged interior of the island on horseback or via a walking tour along the Mistérios Negros. You can also take a boat out onto the often-rough Atlantic to see some of the 28 species of whale and dolphin that live in the waters around the island. 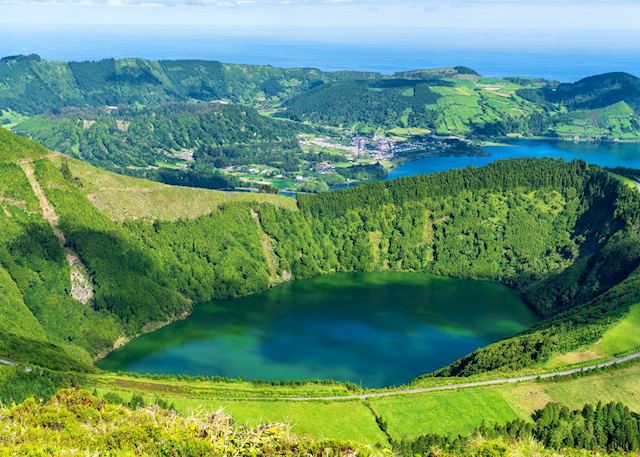