Looking out across Moscow

Russia’s main cities feel broadly European, but its history tells a different story due to the singular political path the country forged in the 20th century, which lives on in the bold Stalinist buildings that pepper Moscow. Our specialists are skilled at crafting Russia holidays that take in all the country’s paradoxes. They can help you delve into St Petersburg, advising you on which imperial palaces to visit, and how to avoid the crowds. In Moscow, they can indicate more unusual ways to experience the city (such as night river cruises), and they know where to find the best skyline views.

Then, leaving the urban behind, you discover a sleepier, more sedate Russia where the vagaries of politburos seem to have had little effect. Holidays to Russia can easily include trips to see the wooden churches of the Golden Ring, and the well-preserved half-medieval town of Suzdal.

These tours give you a starting point for what your holiday to Russia could entail. Treat them as inspiration, as each trip is created uniquely for you.

Whatever your interests, our specialists will build activities into your trip that connect to how you want to experience Russia.

See more things to do in Russia

Our specialists advise on the best months to visit Russia, including information about climate, events and festivals.

Practical tips for travelling to Russia, from social protocols to guidance on money matters, with a link to the latest government travel advice.

Our expert guides to travelling in Russia

Written by our specialists from the viewpoint of their own travels, these guides will help you decide on the shape of your own trip to Russia. Aiming to inspire and inform, we share our recommendations for how to appreciate Russia at its best.

Discover more about Russia on our blog

Speak to a specialist to start planning your tailor-made holiday to Russia... 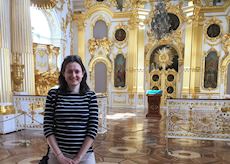