A river cruise between Moscow and St. Petersburg is a relaxing way to see Russia's two main cities, as well as some of its fascinating towns, villages, ancient churches and monasteries in between.

Moscow and St. Petersburg are connected by the mighty Volga, a series of canals, and the two largest lakes in Europe, Lake Onega and Lake Ladoga.

The longer cruises spend more time here, while the shorter ones just give you a taste of the region. It is possible to travel from Moscow to St. Petersburg or vice versa.

View All Tours in Russia

For centuries, Moscow has been the political, cultural and economic centre of Russia.

It's a city of contrasts where the medieval architecture of St Basil's with its iconic onion domes sits alongside Soviet-era high-rise blocks and gleaming skyscrapers of the 21st century.

Approximately halfway between Moscow and St. Petersburg is Goritsy, famed as the place where Ivan the Terrible exiled not one, but two, of his wives. Nearby is the Kirillo Belozersky Monastery, which was once one of the country’s most powerful monastic settlements.

In the middle of Lake Onega lies Kizhi, home to one of Russia’s most iconic sites — the Church of the Transfiguration. Built entirely of wood in 1714 and with thirty domes, the church looks like something out of a fairytale.

Its old wooden houses, colourfully decorated by paintings and wooden engravings, help create a traditional atmosphere, and show visitors what life used to be like hundreds of years ago.

St. Petersburg boasts a magnificent collection of grand buildings, galleries and theatres, and is perhaps Russia's most opulent cultural destination.

St. Petersburg was bestowed with a legacy of wealth and sophistication which is evident in the city's architectural style, its art collections and, perhaps most famously, its vast palaces. 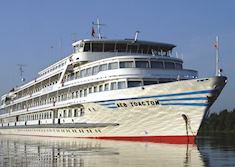 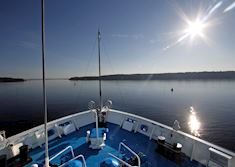