What to do in Saint Kitts and Nevis: our highlights guide

The tiny two-island nation of Saint Kitts and Nevis lies in the Leeward Islands chain of the Caribbean. The silver-sand beaches are less grand than other Caribbean islands, but you’ll find them full of local charm. Explore a little, and you’ll find a unique preservation of local culture from pretty plantation inns to dramatic granite-stone churches.

Explore the streets of Basseterre

The capital of Saint Kitts, Basseterre is small enough to explore on foot. The French and British architecture was damaged in a fire in 1867, but some Georgian buildings, with quaint carved verandas, still survive amongst the modern concrete homes.

The town is built around Independence Square, originally used for slave auctions in the 18th century. The nearby clock tower was constructed in Glasgow and named after Thomas Berkeley Hardtman, a British-born legislator. Walk through the surrounding streets and you’ll pass Anglican stone churches and skirt-and-blouse houses, named after their stone lower floor and contrasting wooden top floor.

If you are in Basseterre on a Friday, you’ll find The Circus, a plaza based on the original designs for Picadilly Circus in London, packed with locals. They come to lime, a local phrase for the Friday custom of sitting, relaxing and drinking together.

Climb up to Brimstone Fortress

Nicknamed the Gibraltar of the West Indies, Brimstone Fortress sits atop a rocky outcrop on the western side of Saint Kitts. A UNESCO World Heritage Site, it’s one of the largest forts in the Caribbean. Built by the British in 1690, many of the original cannons remain lined up on the battlements. It was abandoned in 1852, damaged heavily by a fire in 1867, but has since been carefully restored.

Built from dark volcanic stone, the fort is now home to a museum showing a short video on the history of the site. A sprawling complex, you can gradually make your way up the hill towards the top of the fort, past hospital rooms, parade grounds and a cemetery. Fort George, built on Monkey Hill, is the highest point and remarkably intact. From the top bastion, the views across to Nevis are particularly dramatic, and on a clear day it’s possible to see the island of Monserrat, 64 km (40 miles) away.

Relax on the beaches of Saint Kitts and Nevis

With each island almost completely edged with beach, there are a number of nice stretches of sand to explore and relax on, from deserted coves to bar-lined beachfronts.

Frigate Bay on Saint Kitts is a flat expanse of land jutting out from the southeast of Saint Kitts, sandwiched between the Atlantic Ocean and the Caribbean sea.  An unusual geological feature, it’s home to three of the island’s main beaches.

Frigate Bay Beach is the smallest but liveliest stretch of beach. On the Caribbean side of the bay, the water is warm and safe to swim. The row of beach bars that line the edge of the sand are referred to as ‘The Strip’ locally, becoming lively in the evenings. On a Sunday, locals come to watch live bands and enjoy barbecues on the beach.

South Frigate Beach is located a little further down the coast and is a more relaxed option. It has plenty of choice for a quiet drink, with a mixture of cosmopolitan beach bars and more rustic beach huts scattered along the beach. North Frigate Beach is a long expanse of golden beach on the Atlantic side of the bay. The Atlantic sea is rough so it’s not an option for swimming, but is ideal for a secluded beachside walk.

Nevis is a quieter, less developed island. Pass a local and you’ll be greeted with a warm hello. It’s beaches have retained a laid-back ambience with many still untouched.

A short walk from the capital, Charlestown, Pinney’s is the main beach, a four mile stretch of sand leading into a gentle, aquamarine sea. Relaxed beach bars and food stalls intermittently dot the coastline. These are plastic chair and table affairs, with fresh caught fish and cold beers.

Hiking across Saint Kitts and Nevis

The volcanic island of Saint Kitts is littered with interesting rock formations, ravines and fertile valleys. Hiking trails cut through the landscape, following trading routes made before the island’s roads were built.  A variety of hikes are available from gentle walks through the lowland rainforest to more challenging routes. The paths can be overgrown so it’s worth booking a guide.

For experienced hikers, the four hour hike up Mount Liamuiga, Saint Kitts’s highest peak, is rewarding. It was nicknamed Mount Misery by British settlers who struggled to defend its surrounding land from attack. Climbing up through the rainforest, you break through into thick cloudforest - with a peak of 1,155 m (3792 ft) it’s too high for rainforest to grow. Wild orchids can sometimes be spotted growing on the branches of the trees.

From the cloudforest, you’ll follow a narrow path to the lip of the crater. The crater itself is filled with foliage, sometimes referred to the “giant’s salad bowl” by locals. It’s then a further hike to the peak of the mountain, from which you can enjoy the views of the Caribbean Sea below.

Once the heart of the Caribbean’s sugar trade, Nevis has retained much of its history with monuments and curiosities scattered about the island. Each is not quite dramatic enough to merit an individual visit, so the best way to explore is to hire a car and follow the Nevis Heritage Trail. Nevis’ only main road, circumnavigating the island, is signposted with bright green and blue trail markers, signifying 25 historical sites.

Beginning in Charlestown, each site is illustrated with a blue plaque giving information on the importance of the monument. Highlights include Fort Charles, the largest fort on the island, the spice plantations of Gingerland, and the numerous Anglican churches in various states of disrepair. Travelling by car, it only takes a few hours to drive around Nevis so it’s possible to see the sites in a day.

Spot rare species in The Botanical Gardens of Nevis

Nevis’s volcanic soil is particularly fertile, leading to the successful sugar plantations of the 17th century. The rainforest is gradually reclaiming the sugar plantations, one of the only expanding rainforests on earth. Nevis’s botanical gardens celebrates this array of indigenous flora, as well as collections of imported plants.

Located east of Charlestown, The Botanical Gardens of Nevis are built on the site of the 17th century Montpelier Sugar Plantation. Opened in 1998, the focalpoint is a white framed conservatory, based on the design of the Kew Gardens Palm House in London. Rare birds and butterflies can be spotted around the indoor waterfall and Asian-influenced statues. The palm garden contains more than 100 species of palm whilst the orchid garden is one of the largest in the Caribbean.

The site also boasts herb, cactus and vine gardens, dotted with sculptures and antiques collected by the fine art enthusiast owners. There’s a Thai restaurant and gift shop – or you can visit the nearby Montpelier Hotel for lunch.

Saint Kitts’s narrow gauge railway was built in 1912 and revolutionised the sugar industry. Sugar could now be quickly transported to a central mill in Basseterre. However, the sugar industry declined soon after, and the railway fell into disrepair.

The railway was refurbished in 2003 and is now a good way to see the island, it’s also the only train still running in the Caribbean. The 29 km (18 mile) track winds round the eastern part of Saint Kitts on a journey of about two hours. A coach then completes the circle, taking passengers on a 19 km (12 mile) sightseeing route back to the start. The train travels across ghuts (deep ravines) on steel bridges, surrounded by dark green rainforest and patches of sugar cane.

The carriages are double-decked with an open air top deck, ideal for watching the countryside glide past. During your time aboard, the train driver will announce sites of interest and you might be entertained by the local Caribbean three-voice cappella group.

Start planning your trip to Saint Kitts and Nevis 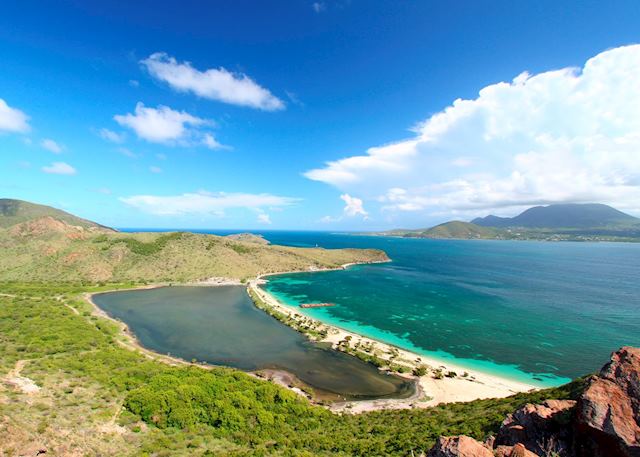