From Nelson Mandela Gateway in the Victoria & Alfred Waterfront, guests will board a catamaran for the half-hour crossing to Robben Island. During this time a video will be shown on-board, explaining some of the history of Robben Island, from its early days as a place of exile for those indigenous and Muslim leaders who questioned first Dutch, then British Imperial rule, through to its use as a leper colony in the early 20th century, and then on to its most notorious phase as a prison under the apartheid regime, for both common-law and political prisoners.

After arriving at the prison harbour, you board a bus with other passengers from the ferry and are taken on a tour of the island. Here you can see the village where the warders lived, the church and graveyard built during the island's time as a leper colony, the house where the Pan-African Congress leader, Robert Sobukwe, spent nine years in solitary confinement, and the lime quarry where prisoners such as Nelson Mandela did their hard-labour.

Around the island you may well see bontebok, springbok and eland, as well as fantastic views over the ocean back toward Table Mountain.

At the prison itself, your tour will be conducted by a former inmate, which gives a truly unique perspective. As well as the communal cells, where most prisoners were kept in conditions of severe overcrowding, you will also see the tiny cells of B-Section, where Nelson Mandela spent much of his incarceration here: it has been left exactly as it was.

After your tour of the island and prison, you will take the ferry back to the Victoria & Alfred Waterfront. 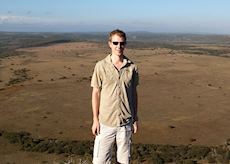