If you’re in Ecuador’s capital, Quito, on New Year’s Eve, you’re likely to see bands of men wearing party dresses and styled wigs roaming through the streets, asking for money. Dressed as the widows of Año Viejos (the old year), they’re collecting money for their husband’s ‘funeral’ (aka that evening’s party).

Quito’s quirky crossdressing is typical of many festivals in Latin America — playful and filled with eye-catching customs. The big events like Rio’s Carnival get a lot of attention, but we prefer the region’s many smaller celebrations. Ranging from solemn to raucous, they often combine Catholic holidays with pre-Columbian traditions to create vibrant and captivating spectacles.

As I was walking down a street in Písac, Peru, a clutch of young boys came thundering around a corner. They smiled tentatively, and I smiled back, an unspoken agreement to play. Next thing I knew, I was sprinting down the street, dodging water balloons and hiding in doorways. 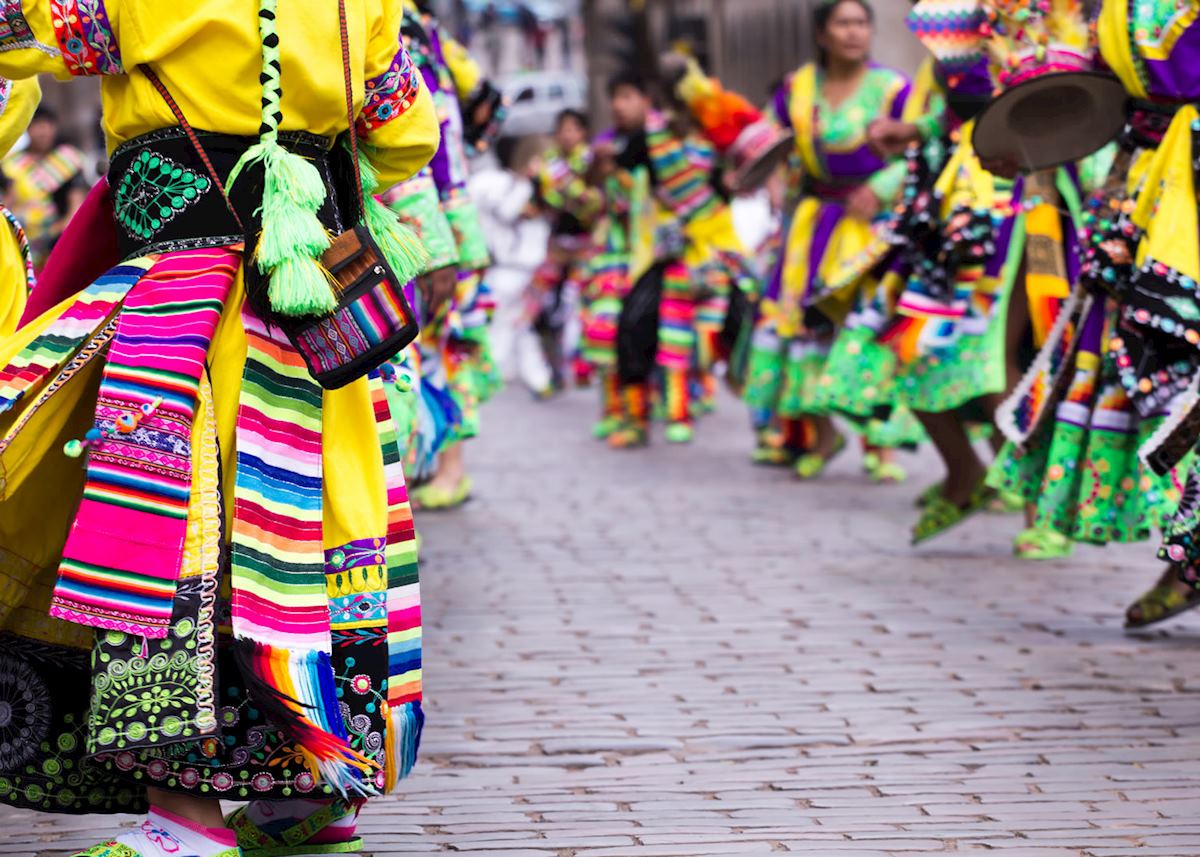 Finally they cornered me and there was nowhere left to run. I held up my hands in surrender and got pelted with the remainder of their arsenal. They left laughing, without speaking a word to me, as I walked away dripping wet.

That was my welcome to Martes de Challa in Peru — a spontaneous and protracted water fight throughout Peru that has merged with Carnival. In typical South American fashion, the holiday combines both Christian and Andean customs. Pachamama is a benevolent Andean goddess and scholars believe her festival day became tangled with the traditions of Shrove Tuesday (the last day before Lent). Worshippers would sprinkle water as an offering to Pachamama, a tradition that has since ballooned.

In parts of the region with strong indigenous cultures, the week before Lent now includes a week long water fight, filled with giant squirt guns, spray cans of foam and sometimes even buckets emptied over your head. (That last one only happened to me once.) Spontaneous battles break out in the streets and bystanders beware. Most revellers are generally respectful of visitors and won’t soak you if you’re carrying an armful of groceries, but you should expect to get caught in the crossfire or an ambush. I advise you to emulate the locals and carry a plastic poncho, or at least a change of dry clothes in a waterproof bag.

People come from all over the world to Rio to celebrate Carnival in the week before Lent, and their overwhelming presence has inevitably changed some aspects of the celebration. By contrast, in Colombia, Barranquilla’s Carnival attracts fewer tourists but plenty of energy, excitement and scantily clad dancers. 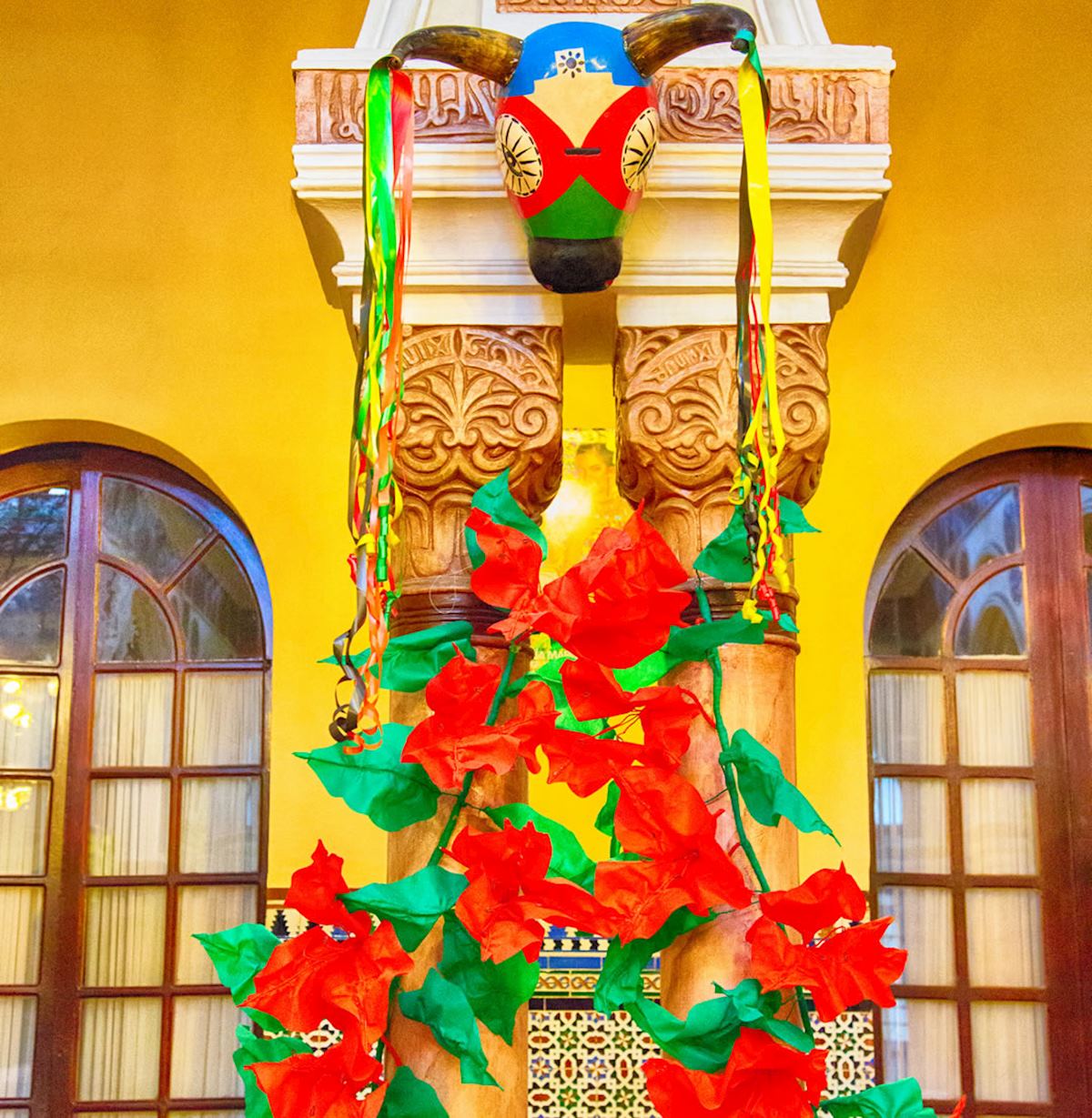 A sprawling industrial city, Barranquilla is located on the northern shore of Colombia, where the Magdalena River empties into the Caribbean. Its steel-and-concrete high rises aren’t the most charming cityscape, but once a year the city shuts down its streets and kicks up its collective heels for a Carnival celebration that’s second only to Rio.

Here you can find almost all of the same attractions you’d get in Rio. There are daily parades with elaborate floats and limber dancers in costumes that range from folkloric to fantastical. Open spaces called verbenas host parties where you can drop in to eat, drink and dance. Music and dancing fills the streets.

There are differences, too. The cambia music subtly differs from samba, for example. But the biggest difference is the accessibility. Rio puts on a grand show, but Barranquilla seems to invite everyone in.

Last time I was there, I was squeezing through the sweltering crowds when I stumbled on a group of performers all wearing costumes of mythical creatures. I paused to gape at a dancer wearing heavy ram horns standing next to a man wearing an enormous spreading cape made out of flowing white fabric.

With a gesture, the caped man summoned me out of the crowd. It was hard to hear what he said over the collective roar and the pounding of the music, but eventually I figured it out — he needed someone to carry his train for the length of the parade. And just like that, I wasn’t watching Carnival, I was part of it.

Beginning on Palm Sunday and continuing throughout Easter, Semana Santa (literally ‘holy week’) is an important festival across Central and South America. But few cities celebrate with as much devotion and spectacle as Antigua in Guatemala. 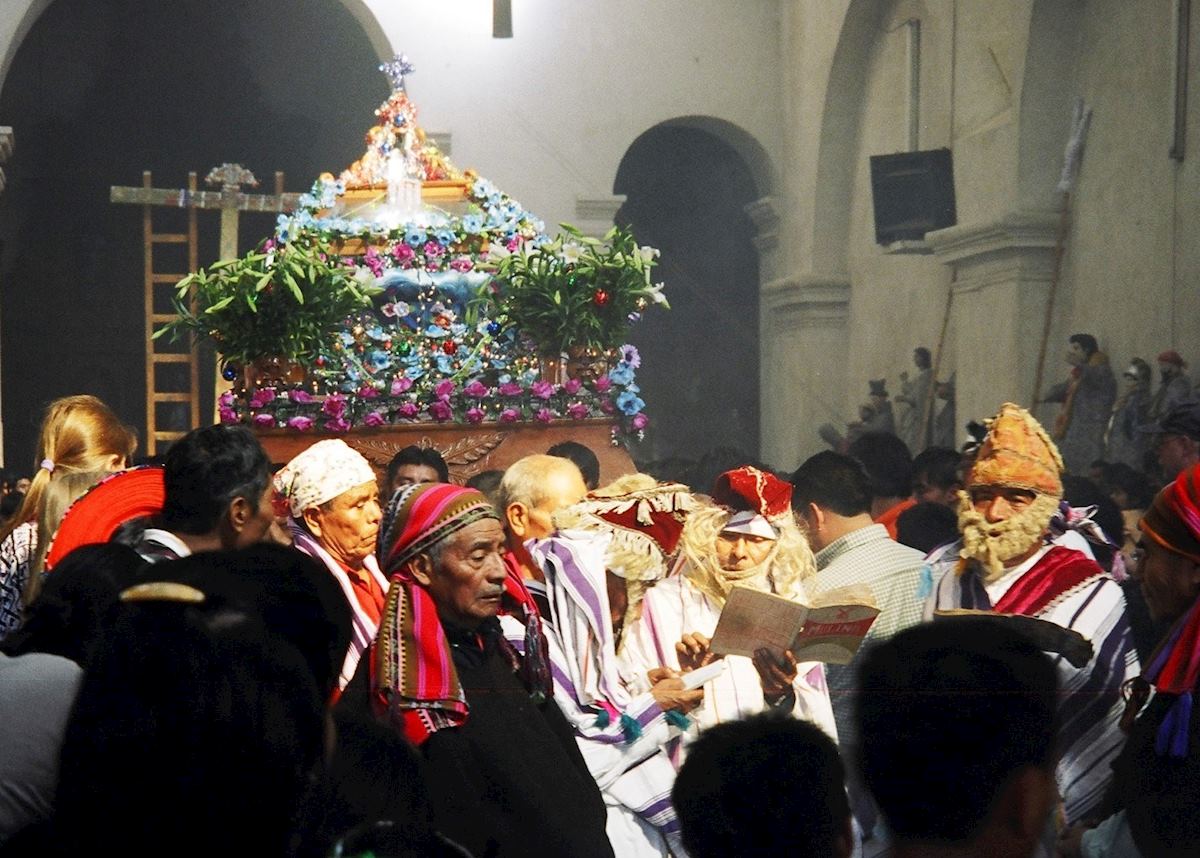 Religious processions make up a central part of the festivities. Men called cucuruchos (bearers) carry enormous floats holding statues of Christ and the Virgin Mary — often weighing several tons and requiring the efforts of 100 bearers — through the streets. They wear purple robes and cowls, and perform the service as an act of penitence. The procession ends at a church where people gather for food, music and games.

The cucuruchos walk over intricate alfombras (carpets) made of dyed sawdust, palm fronds and flower petals. Vibrant and ephemeral, these works of art might be planned for weeks or even months.

The thick carpets cushion the bearers’ feet on the cobbled streets and are completely destroyed by the parade, only to be made again for the next day. On one visit to Antigua, I woke up before sunrise to see locals still working on an alfombra outside my window, frantic to get it done before the morning procession.

Just as Pachamama is the benevolent goddess of the region, her husband, Inti, is the munificent sun god. His festival, Inti Raymi, takes place shortly after the winter solstice on 24th June, just as the days are at their shortest and the sun needs to be coaxed back. 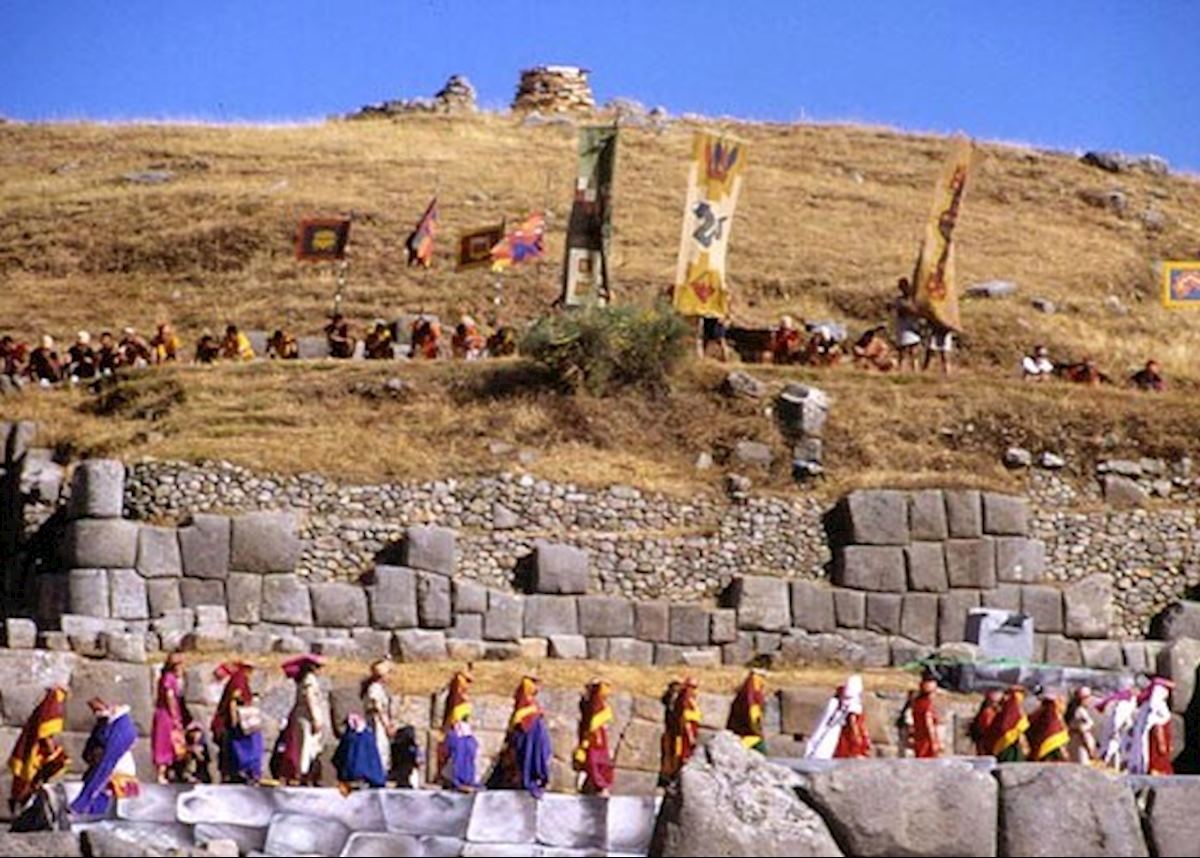 During the Inca heyday, this was a daylong ritual involving singing, dancing and the mass sacrifice of hundreds of llamas — the modern re-enactment is happily less bloody. It’s also a popular event, which requires you to reserve tickets and a place to stay well in advance.

The ritual begins at Qorikancha, the Inca sun temple in Cuzco, where hundreds of brightly dressed participants stand in ranks along the site’s stone walls. The procession wends its way slowly through the city to the Plaza de Armas, full of music, dancing, and prayers from the brightly clad priests and priestesses. There are people carrying offerings or dressed as sacred jaguars, women with brooms sweeping away evil spirits, and children scattering flowers.

Eventually, the ceremonial train reaches Sacsayhuaman, an Inca ruin that boasts a sweeping view of Cuzco. Composed of giant stones fitted together with exceptional precision, the remnants of the fortified complex provide a grand setting for the culmination of the festival. Spectators gather on grandstands to watch the climax, which is conducted in the Inca language of Quechua.

Repressed by the conquistadors for hundreds of years, the ritual has been performed in Cuzco, the modern incarnation of the Inca’s historic capital, since 1944. It’s a recreation based on records by 16th-century poet Garcilaso de la Vega, the son of a conquistador and an Inca princess. Some Inca enthusiasts grumble that the event is too staged, but the participants’ enthusiasm is palpable and it offers a chance to witness an echo of the empire’s past glory.

Located in the northern part of Colombia, Medellín is the country’s second-largest city, nestled in the Aburrá Valley in the Andes. The city’s Feria de las Flores (Flower Festival) dates back to the 1950s and is held each summer in late July or early August, to capture the beauty of the local blossoms. 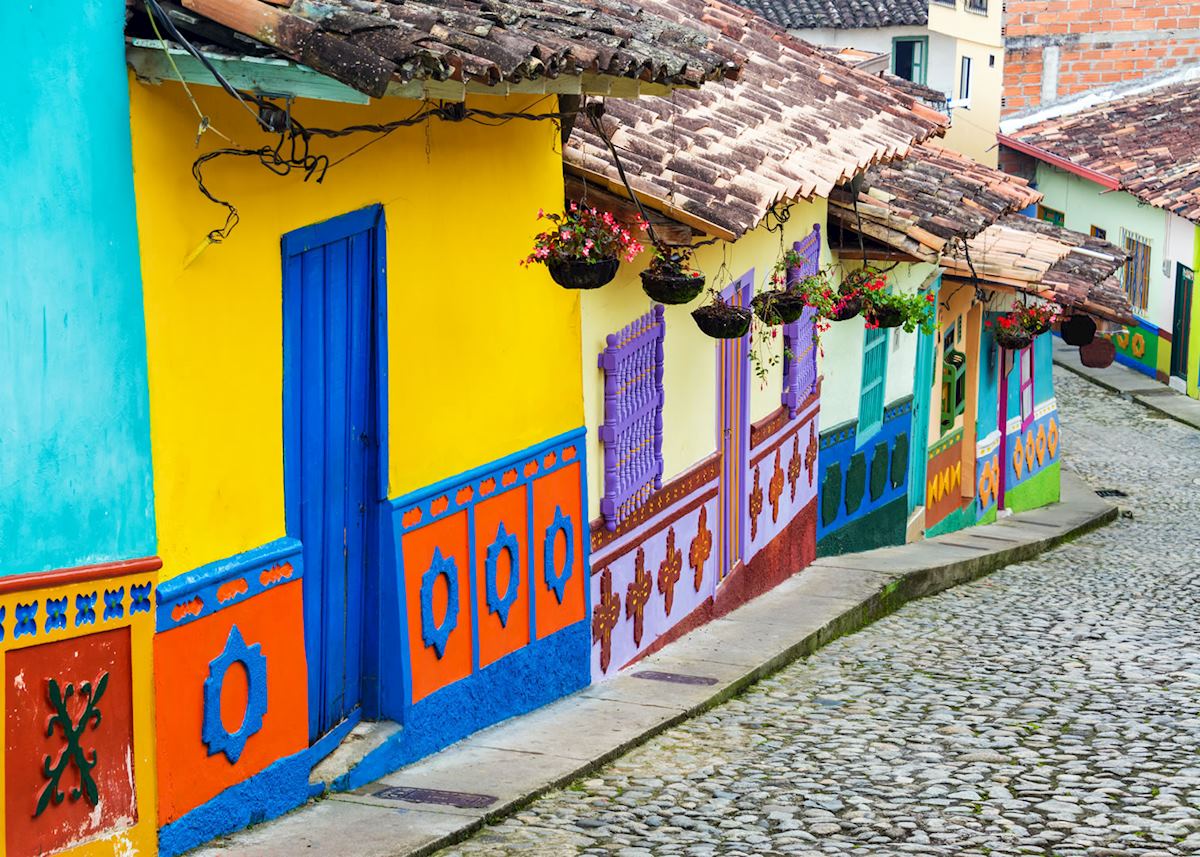 The parade at the heart of the festival is known as Desfile de Silleteros. Participants, or silleteros, carry small floral floats on their backs. The bright displays both celebrate the city’s main export — flowers — and remember the slaves who were forced to carry colonial officials on their backs up and down the steep sides of the mountains. The procession is just a small part of the multi-day festival, which also includes exhibitions at the Joaquin Antonio Uribe Botanical Garden, a pet parade, an antique car exhibit, music, dancing and a horse cavalcade known as La Cabalgata.

Though the festival is named after the flower parade, I prefer La Cabalgata when hundreds of people slowly ride through the streets on horses for three hours. The horses are often decorated with flower garlands and the riders almost always wear cowboy hats. When you visit, I strongly advise wearing sturdy, closed shoes that are easy to clean. Manure happens.

The Dia de Muertos (Day of the Dead) festivities in southern Mexico are the best known, full of decorated sugar skulls, dancing skeletons and elaborate altars. But the holiday is celebrated throughout the region and the traditions vary from village to village. Venturing beyond Oaxaca gave me a new appreciation for the many ways different cultures within Central America look at death and mortality. 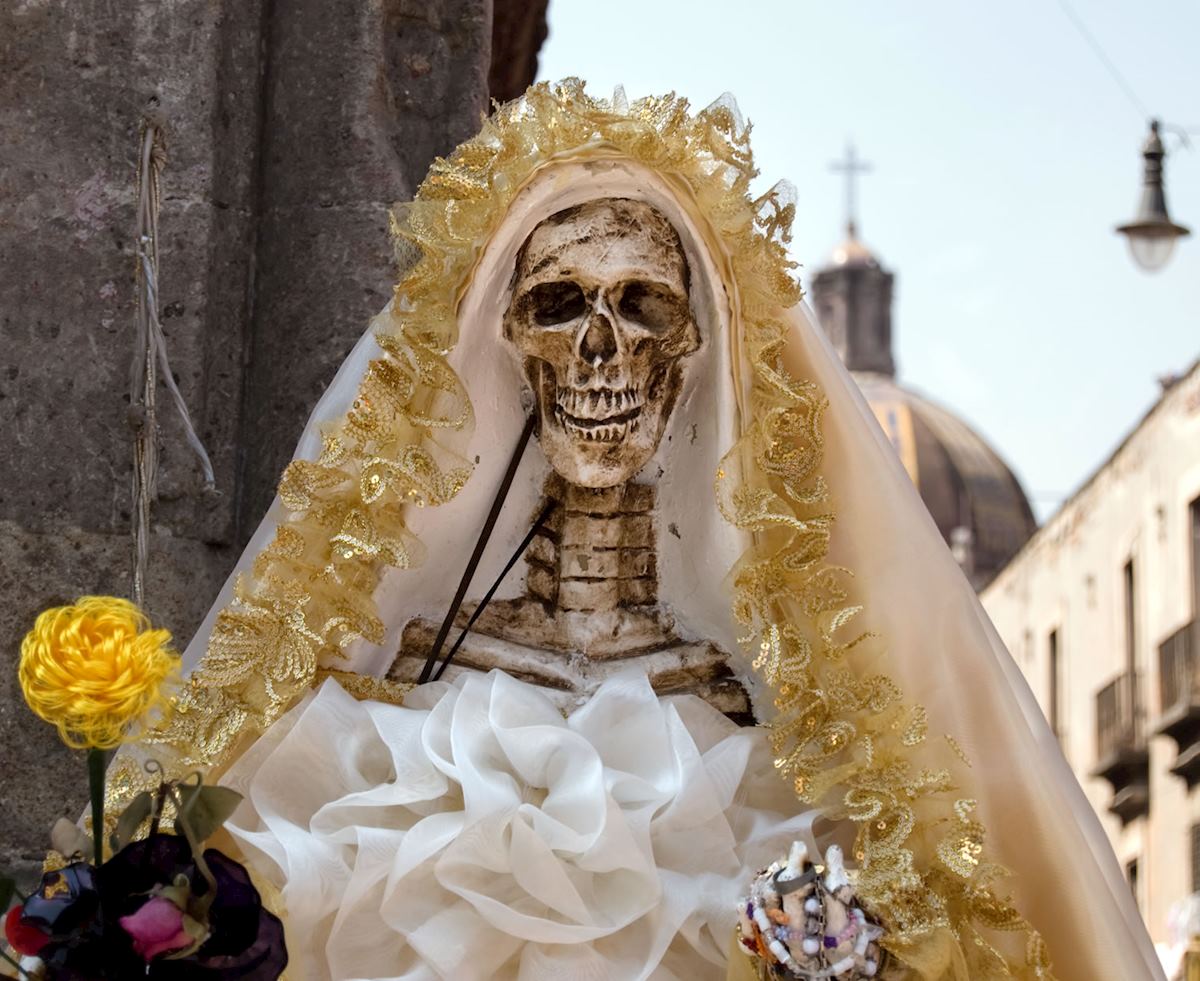 In Guatemala, whole families gather in graveyards to celebrate their lost relatives. Everyone wears cheerful autumnal shades — orange and yellow. Mothers and grandmothers cook special meals for the returning spirits. Mariachi bands play throughout towns while families eat, drink and dance. And the cemeteries are full of children flying kites.

The tradition is thought to date back to the pre-Columbian era, when kites were used as a way to connect the land of the living with the land of the dead. It has merged with the Catholic holidays of All Saint’s Day and All Soul’s Day (the first two days of November) to create an exuberant celebration of the departed. In the town of Sumpango, the practice has grown to impressive dimensions with the Festival de Barriletes Gigantes (Festival of Giant Kites). The townspeople spend weeks building and painting colossal constructions that can reach up to 8 m (26 ft) high. Intricately decorated with lively designs, these mammoth masterpieces seem too unwieldy to fly.

Indeed, it takes a team of multiple people to launch them into the air. The teams compete, in a friendly fashion, to see how long they can keep their particular creation flying. As the huge kites soar and wheel overhead, families cheer in joyful remembrance of their lost loved ones.