Girona was long a pawn in a fight for empires, with its medieval walls surviving more than 20 sieges. Originally a Roman settlement, this major Catalan city has seen French Napoleonic troops, Visigoths and Moors pound its cobbled streets. It also laid claim to one of Spain’s largest and most important Jewish communities during the Middle Ages.

Within the city walls is the Call, Girona’s Jewish quarter. You can tell when you’ve arrived here — the streets narrow so that you can touch both walls with outstretched hands. Courtyards are embossed with Star of David mosaics and the occasional hanukkiah (candleholder) has been built into the wall. The Jewish community was expelled from the city by royal decree in 1492, an event explained in detail in the Catalan Jewish Museum.

The Catedral de Santa María de Girona stands sentinel above the city, its conglomeration of Romanesque, Gothic and Baroque architecture an ode to Girona’s multifaceted history. Inside, you can walk down the widest Gothic nave in the world, which is illuminated by stained-glass rose windows. Below, the Barri Vell (old quarter) clings to a hill leading down to the banks of the Onyar River.

The Barri Vell is a network of narrow cobbled streets that curve between monasteries and churches. Here, you’ll also find the 12th-century Baños Árabes (Arab Baths), a Roman-inspired bathing complex that, with its vaulted ceilings and a stone cupola covering the central pool, looks more like a series of interlinked chapels. While the baths are no longer in use, you can visit the restored building that houses them.

To get to grips with the geography of the city, you can follow the circumference of the Força Vella, the city walls that mark the original Roman precinct. Made from rough-hewn sandstone blocks, these walls have been absorbed by the growing modern city, but many of the fortified towers and battlements still stand. To learn more about this period in the city’s life, you can visit Sant Pere de Galligants, a Benedictine monastery that’s now an archaeological museum focused on Gerona’s Roman history. 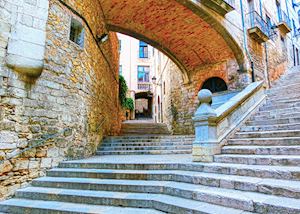 From the old town, you can walk along the Pont de Sant Agustí, a bridge from where you can see the bright yellow, blue and pink painted houses that line the waterside. A short walk away is the Plaza de la Independencia, which commemorates the struggle for Spanish independence against Napoleon.

At the plaza you can dine in one of the cafés and restaurants that have opened up under the neoclassical porticos. Led by Girona’s very own El Celler de Can Roca, winner of the 2015 World's Best Restaurant Awards, the city’s eateries serve a high level of cuisine, from contemporary Catalan specialties to creative Michelin-starred food.

You can visit Girona for the day from Barcelona, and combine it with a visit to Figueres, the birthplace of Salvador Dalí and location of his Teatre-Museu Dalí, a self-tribute to his life and work.

Thanks to the temperate Mediterranean climate, there’s never a bad time to visit Girona. Spring arguably sees it at its best, when temperatures are mild, the streets never crowded and the flowers in bloom. In late May, the weather begins to heat up, and it’s an ideal time to travel if you’re looking to combine Girona with some time on the coast. Please note that in August many shops and sites close. September sees the start of cooler days, but the evenings are still warm enough for you to eat outside at a time when a number of festivals in the area celebrate the grape harvest.

Our itineraries will give you suggestions for what is possible when you travel in Girona, and they showcase routes we know work particularly well. Treat them as inspiration, because your trip will be created uniquely by one of our specialists.