Temple of the Tooth, Kandy

Be escorted to a performance of the traditional Kandyan dance, accompanied by tumultuous drumming. Dances include the cobra dance, mask dance, the Ginisisila, showing power over fire. The entire frenetic and colourful spectacle climaxes with the amazing fire-walking act.

From the theatre it is only a short walk along the lake to the Temple of the Tooth. The Tooth Relic, purported to be a tooth of Buddha, was brought to the city of Kandy in 1542, around 70 years after the city was founded, even though there had been settlements there for at least 150 years before that. The tooth is the most sacred relic on the island, which is situated in the Dalada Maligawa, inside the palace complex next to the artificial lake in the centre of Kandy.

Photos of Kandyan Dance Performance & Temple of the Tooth

Other experiences in Kandy 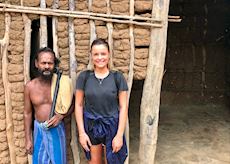