What to do in Uganda: our highlights guide

The first time I arrived in Uganda with limited knowledge of the country, the land stretched out before me like a blank canvas. As I journeyed through its rainforests and rift valleys, passing distant volcanoes and crater lakes, I garnered a fresh image of Uganda. Beautiful, unspoiled countryside, rural communities with their own quirks and traditions, and a richness of wildlife sightings you’d be lucky to repeat in a lifetime.

Of course, the greatest experience I had was trekking through rainforest to spend an hour with a troop of mountain gorillas. Everything else, though, was a bonus. Braced with an adventurous spirit, you can spot tree-climbing lion on game drives, greet chimpanzees eating figs in the forest and watch flamboyantly plumed birds flit across volcanic lakes.

Most trips take a circular route around the country. You fly into Entebbe, on the northwestern shore of Lake Victoria, and travel in a 4x4 with a private driver-guide in a clockwise or anti-clockwise loop. The classic route, which I recommend, takes in Bwindi Impenetrable Forest (with a stop usually made en route in Lake Mburo National Park to break up the ten-hour journey), Queen Elizabeth National Park and Kibale Forest National Park, which is around six hours northwest of Entebbe.

The roads can be bumpy (my guide joked that I was being treated to an ‘African massage’) and they sometimes skirt the edge of steep drops, but your driver will be familiar with the route and put you at ease. As there are some long journeys, you get to see a large portion of the country and its shifting landscapes.

There are fewer than 1,000 wild mountain gorillas left in the world, and Uganda is home to a significant proportion of them, now under strict protection. Several troops of around 15 to 20 gorillas reside in this aptly named forest in the southwest corner of the country, four of which have been habituated to humans.

To get to the gorillas, you head out early in the morning, when the forest is still waking and mist hangs in the air. Just eight permits are granted per troop, per day. While this means you have to book your trek well in advance, being in a small group ensures the gorillas don’t feel threatened. The money from each permit goes toward protecting the gorillas through habitat conservation, anti-poaching efforts and the education of local communities.

An experienced guide leads the way through dense vegetation and often steep terrain. The length and difficulty of your trek depends on where the gorilla troop is that day. While my trek was just 40 minutes each way and fairly straightforward, some last for three to four hours each way and can be strenuous.

Despite the challenges, walking through this truly wild forest is still a highlight. The anticipation builds with every step as you make your way around tangled trees and thick, snake-like roots. As we walked, our guide pointed out other wildlife sightings and sounds — the forest is one of the most biologically diverse in Africa, home to red-tailed and colobus monkeys, bushbuck, over 350 bird species and even the odd forest elephant, which are rarely seen but leave behind tell-tale tracks.

I recommend having your own porter for the trek, especially if you’re following a longer, more arduous route. They’re employed from local villages and very experienced in navigating the forest, helping you over streams and treacherous terrain while carrying your bag. If you’re less mobile, you can also opt to be carried in a chair through the forest, so the experience is suitable for most ages (although you must be aged over 16).

It’s difficult to describe the feeling you get when you finally set eyes on a gorilla troop. I’d never expected to have such an intimate experience with gorillas, and it was a privilege to be in their presence. They were bigger than I’d imagined, more gentle in their movement, and more or less unfazed by our intrusion into their pocket of forest.

To prevent the spread of disease, you must keep a distance of at least 7 m (23 ft) from the gorillas. However, the gorillas themselves don’t always adhere to these rules. As we stood in a line watching them graze on nettles, tree bark and leaves, one of the males began to approach us. He must have spotted something interesting behind us, because he walked straight through the group, acting as though we weren’t there.

During the hour you’re with the troop, you not only observe their body language, but also listen to them communicating with each other. This varies from belch-like noises to songs of contentment and playful laughing (particularly among the younger gorillas).

While you only visit one troop, it’s diverse in terms of the gender mix, size and ranking of the gorillas. There’s always a large dominant male, known as the silverback, as well as a secondary silverback ready to take charge should anything happen to the alpha. The rest of the troop is made up of several smaller, younger blackback males, which act as sentries, an alpha female who’s the predominant mate of the silverback, and a few other females and their young.

For an even more intimate encounter, you could take part in a gorilla habituation experience in the Rushaga region of Bwindi, helping gorillas to adjust to human presence. This involves trekking to a gorilla troop in a group of no more than four people, plus a guide and a small research team. You then spend four hours with the gorillas, giving you more time to observe and get to know each individual in the troop.

Where to stay near Bwindi Impenetrable Forest

Accommodation options in the area are quite mixed in terms of facilities, with electricity in short supply and hot water not always available. But they do offer comfort, character and a friendly service.

I stayed at Mahogany Springs, overlooking the forest by the Munyanga River. It offers spacious rooms and a characterful main lodge with a thatched roof and open fireplace. Money from the lodge is given back to local farming communities, and the property runs a tree-planting scheme to encourage guests to offset carbon emissions.

Uganda might not be your first thought when considering a safari, but I think that’s doing it a disservice. Queen Elizabeth National Park, around a five-hour drive north of Bwindi, is home to four of the Big Five (lion, leopard, elephant and buffalo) as well as warthog, hyena, hippo and several antelope species.

It’s also a popular birdwatching site, with over 600 bird species found around its woodlands, grasslands, lakes and swamps. Among them are black and African emerald cuckoos, pied kingfishers, swamp flycatchers and squacco herons.

I saw some of the park’s tree-climbing lions. My guide pointed up a fig tree where a male with a distinctive black mane was slumped on one of the branches. There are several theories as to why they climb trees: some say it’s to escape the tsetse flies buzzing around at ground level, others think it’s a way of cooling themselves down or of scoping the landscape for prey. The only other place you can encounter lions like this is Tanzania’s Lake Manyara National Park.

The park lies in a huge rift valley with flowing rivers and channels that link up volcanic lakes. If you’re staying for more than one night, you can head out with your driver-guide for a whole day of exploring the park’s wildlife along the 200 km (124 miles) of game tracks. Even if you’re only staying for one night, you’ll encounter wildlife as you drive to and from your camp.

Where to stay in Queen Elizabeth National Park

In the southern section of the park, Ishasha Wilderness Camp comprises a small number of well-sized canvas tents lining the riverbank. From your private veranda you can watch hippo wallowing in the water and elephant quenching their thirst right in front of you.

I also recommend Katara Lodge, perched high on the escarpment overlooking the park. Here, well-equipped thatched cottages sit on stilts, each with a solar-heated shower and roll top bath. Staff can set up your bed out on the balcony so you can sleep under the night sky.

Kibale Forest adjoins Queen Elizabeth National Park to the north, and together they create a 180 km (112 mile) corridor for wildlife. The forest is home to the greatest concentration and variety of primates in East Africa — a total of 13 species. These include chimpanzees and red colobus monkeys (both classed as endangered), L’Hoest’s monkeys (classed as vulnerable), golden and blue monkeys, black and white colobus monkeys and grey-cheeked mangabeys.

It’s quite overwhelming to see so many different kinds of primate in one place, jumping and calling through the trees. But there’s no question that the chimpanzees are the main draw. In a similar set-up to the gorilla tracking, you must have a permit to visit one of the five habituated chimpanzee troops (each usually consisting of around 25 individuals), as part of a small group led by experienced guides.

The treks through the forest usually take less than an hour each way, during which time you’re likely to encounter other wildlife species. Along with the primates, Kibale is habitat to 250 species of butterfly, whose red, turquoise and neon-blue wings catch your eye with a flash as you walk. I’m no birdwatcher, but I was astonished by the birdlife here. I couldn’t help pausing to watch birds flit through the canopy and listen to their calls — sounds I’d never heard before but have committed to memory.

Once you reach the chimpanzees, you have an hour to watch them playing in the trees, eating figs and leaves, or having a bit of a snooze in huddled groups. Chimpanzees spend more time up in the branches than on the ground, so my encounter with them wasn’t quite as intimate as my experience with mountain gorillas. They were very active, though, and after a while their individual and uncannily human-like personalities began to shine through.

Where to stay in Kibale Forest National Park

You can stay within the forest itself, or around the Buyuruguru Crater Lakes to the west. I like Ndali Lodge, set on a hill overlooking Lake Nyinambuga. The whole area is incredibly green and fertile, with bananas, mangoes and papayas growing across the surrounding hills. The lodge’s spacious stone cottages are dotted throughout the grounds, and there’s a well-stocked library in the main lodge.

Start planning your trip to Uganda 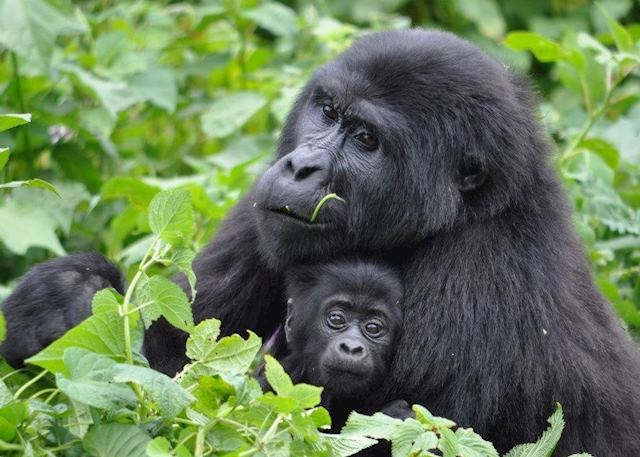