Nxai Pan Camp is located in Nxai Pan National Park, which adjoins Makgadikgadi Pans National Park. The camp has just nine purpose-built desert chalets, each exceptionally spacious, with both indoor and outdoor showers and a private decking area where you can relax between activities. Built in a traditional style, they have high wooden ceilings, whitewashed walls and rustic wooden furniture adorned with neutral-shaded fabrics.

This style is carried through to the main lodge, which has a dining room, lounge area and viewing deck looking out across the plains and a nearby waterhole that’s often visited by zebra, elephant and ostriches. You’ll also find a pool, library and curio shop, as well as a boma area where an open fire pit is lit in the evening.

Activities focus on morning and afternoon game drives in open 4x4 vehicles, but you can also join bush walks with a local San Bushman guide to learn about their relationship with the bush, or travel farther out in a 4x4 to see the Baines Baobabs. 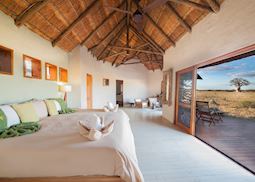 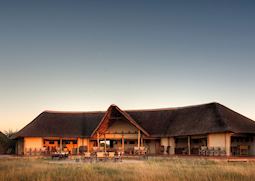 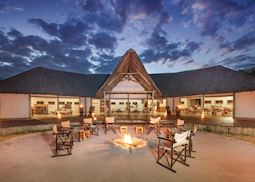 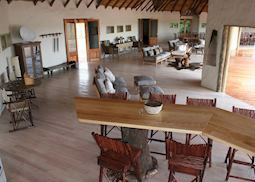 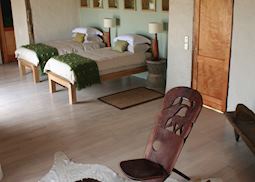 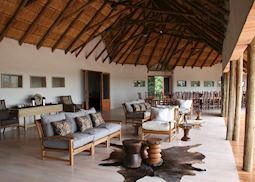 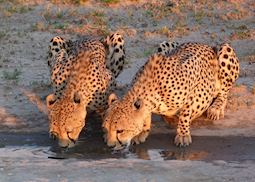 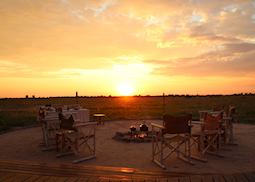 The camp’s nine chalets include seven twin rooms and one family room. Each has both an indoor and an outdoor shower, and you can relax out on your private deck between activities, which looks out towards the waterhole. Tastefully decorated in a light, airy but traditional style, they offer just the right amount of home comforts without detracting from the authenticity of a safari camp.

Around 30 minutes by light-aircraft flight from Maun, Nxai Pan National Park is a predominantly arid area strewn with salt pans that were once part of the great lake that covered central Botswana. They now form part of a landscape covered by grassland and dotted with acacias and mopane woodland. The area attracts big herds of plains game, particularly during the rains from November to April, which in turn attracts predators such as lion, cheetah, jackal and hyena.

Meals are served in the open-plan dining area, which looks out across the plains. You’ll share meals around a large table with fellow guests, including barbecued meats, fresh vegetables and salads and some more traditional options. In addition to dinner, expect a light breakfast of breads, porridge and fresh fruits before you head out on your morning game drive, as well as a hearty cooked brunch upon your return.

There’s one family room here with two sleeping areas and a shared bathroom.

Each day, you’ll head out on morning and afternoon game drives in open 4x4 vehicles. As this is a national park rather than a private reserve, vehicles must stick to the main tracks, but you’re still likely to see a good amount of wildlife, including zebra, wildebeest, elephant, giraffe and a wealth of birdlife. You can also join bush walks with a local San Bushman guide who’ll point out different plants and explain their various uses, as well as showing you tools and weapons used by San Bushmen, fire-making techniques and ways to identify wildlife tracks. Another option is to head out in a 4x4 to see the Baines Baobabs, made famous by 19th-century painter Thomas Baines, where you can enjoy a freshly prepared picnic in the shade.

This camp is an excellent option for anyone looking to experience a remote, less-visited area of Botswana. The game viewing here can be excellent, although not as reliable as in the delta, and we highly recommend the San Bushman walk.

Start planning your tailor-made vacation by contacting ​one of our certified Botswana specialists...