Flung out into the Atlantic, the three Aran Islands are bastions of traditional culture, where Irish is still the spoken language and a delicate filigree of stone walls weaves across the desolate but beautiful karst landscape.

Inis Mór (pronounced Inish More) is the largest and most easily accessible of the three, 40 minutes by ferry or a 10-minute flight from the mainland.

Apart from the little village of Kilronan, with its handful of lively pubs, the island is sparsely populated, scattered with cottages whose inhabitants' lives are inextricably entwined with the sea.

The islands are an extension of the Burren and feature the same tortured blanket of limestone karst pavement, which leaches into the sea in places and in others rises into sheer cliffs. The fissures in the rock provide an ideal habitat for a diverse array of Mediterranean, alpine and Arctic plants that bloom in spring. 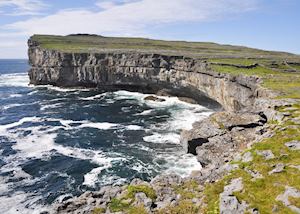 Along the coast, the cliffs rise to a height of 100 m (330 ft), while at Poll na bPéist (the Worm Hole) waves break explosively below the cliffs from a natural rectangular hole in the rock.

Nearby Dún Aengus, a stone fort dating back about 2,000 years, is one of the most important archaeological sites in the country. Its three non-concentric walls are protected by a wide belt of spiked stones, known as a chevaux de frise, and end abruptly at the cliff edge. With Atlantic rollers crashing below the sheer drop and an ethereal light reflecting from the water, it's a spiritually charged place whose original purpose isn’t fully understood.

Numerous stone churches, many dating from the early Christian period, are scattered across the island in-between countless small fields enclosed by the tangle of stone walls. Life here is still very traditional, and farming and fishing are abiding economic mainstays. Originally, farmers mixed sand with seaweed to create a layer of soil on top of the protruding rock, and seaweed is still taken from the beaches and dug into the fields to keep them fertile.

Fishing here has always been a means of survival, and Inis Mór remains among the best places in the country for both shore fishing and deep sea angling. The traditional Aran boat is the currach, a lightweight wooden rowing vessel stretched with a tarred canvas, which you'll see upturned on beaches and piers. In June at the Patrún Inis Mór, the festival of the island's patron saint, the rowing races are a testament to the strength, endurance and hardscrabble lifestyle of the people of these isolated islands.

This sample itinerary will give you an idea of what is possible when you travel in Inis Mór, and showcases routes we know work particularly well. Treat this as inspiration, because your trip will be created uniquely by one of our specialists.

Our specialists seek out authentic ways to get to know the places that could feature in your trip. These activities reflect some of the experiences they've most enjoyed while visiting Inis Mór, and which use the best local guides.