The setting for some of Ireland’s most significant historical monuments, the Boyne Valley sits just north of Dublin, making it a convenient destination from the capital. Irish folklore and tradition are inextricably linked with the area. Most notably, the Hill of Tara was known as an entrance to the underworld and served as the base for Ireland’s high kings. Nearby is Newgrange, a massive Neolithic passage tomb with an enigmatic purpose, and enormous Trim Castle, which guarded the edge of the Anglo-Norman controlled area around Dublin known as the Pale.

For me, the Neolithic passage tomb of Newgrange and surrounding Boyne Valley make up the most interesting day trip from Dublin. I love the history.

Things to see and do in Newgrange & the Boyne Valley

Predating the Egyptian pyramids and England’s Stonehenge, the Stone Age passage tomb at Newgrange is one of Europe’s foremost prehistoric monuments. The massive tumulus dates back to the Neolithic period (approximately 3,200 BC) and consists of a huge circular mound ringed by a circle of stones.

The main entrance is guarded by an intricately carved boulder, while inside a narrow passage leads to a central chamber roofed with corbel vaulting that remains waterproof. Archaeologists suggest Newgrange may have been a royal burial place or a ritual site. Another theory explains it as an astronomical calendar, because the roof box above the main entrance aligns with the rising sun on the winter solstice, allowing light to illuminate the inner chamber. 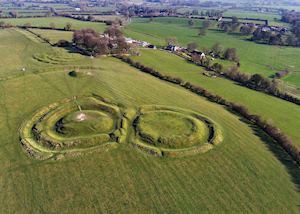 Ireland’s most sacred site, the Hill of Tara holds a special place in traditional folklore and mythology. It was the home of the druids, the ceremonial base of Ireland’s high kings and a supposed entrance to the underworld.

Today, it makes a scenic and mystical place to walk. Numerous prehistoric burial mounds and ring forts cover the hill and you can see the Lia Fáil, the coronation stone, which was in use up until the 6th century. The Tara Visitor Centre shows a 20-minute presentation about the site’s history and significance, and has displays on some of the archaeological finds unearthed here.

Offering commanding views over the surrounding landscape, the Hill of Slane is reputedly the place where Saint Patrick lit a paschal fire in defiance of the orders of Ireland’s high king Laoghaire. When confronted, the saint attempted to convert the pagan king by explaining the concept of the Holy Trinity to him using a shamrock.

Although the incident probably took place elsewhere, the hill became an important religious site and educational hub, and the shamrock one of Ireland’s enduring symbols. Walk up the hill to see the ruins of a Christian church and friary, including an early Gothic tower, and the nearby remains of a 12th-century motte and bailey. 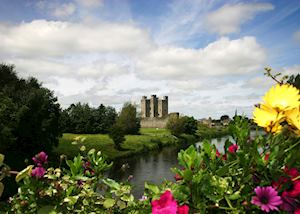 This mighty castle, the largest Anglo-Norman fortification in Ireland, dominates the small town of Trim, which was an important hub in medieval times. It was built by Hugh de Lacy in 1173 but destroyed a year later. Rebuilt in 1200, much of what you see today is little changed since, including the massive curtain wall with its eight towers.

Beyond the wall, ditch and moat is the colossal stone keep with three floors designed in a cruciform. The castle was at the western limit of the Pale, the region around Dublin under Anglo-Norman control, and undoubtedly saw fierce battle in its time. More recently, it stood in as a double for York Castle in the film.

Surrounded by farmland, the ruins of the early Christian monastery at Monasterboice claim among them one of the country’s finest round towers and two intricately carved high crosses. The tower, which is 28 m (92 ft) tall without its cap, was attacked in 1097, when many of the monastery’s precious manuscripts were destroyed.

The West Cross near the round tower is one of the tallest in Ireland at 6.5 m (21 ft) high. It’s carved with biblical scenes, although some panels are severely weathered. Muiredach’s Cross near the entrance is better preserved and would once have been brightly painted. The monastery was founded in the 5th or 6th century by a follower of Saint Patrick.

Although long days and fine weather make the summer months ideal for visiting, it’s also peak season and many of the Boyne Valley sites can be crowded. Come in May or September for good weather but fewer visitors.

Start planning your trip to Newgrange and the Boyne Valley

Map of Newgrange and the Boyne Valley

Places near Newgrange and the Boyne Valley

Photos of Newgrange and the Boyne Valley

Ideas for experiencing Newgrange and the Boyne Valley

Our specialists seek out authentic ways to get to know the places that could feature in your trip. These activities reflect some of the experiences they've most enjoyed while visiting Newgrange and the Boyne Valley, and which use the best local guides.