Opened at the request of King Alfonso XIII, the Westin Palace Madrid was once the largest hotel in Europe and has welcomed guests into its august halls for over 100 years. The grand property has 470 rooms and is well-located less than a five-minute walk from the Museo del Prado in central Madrid. Entering the large marble lobby, the hotel’s most impressive feature is the central stained-glass rotunda, which, during the Civil War, allowed in enough natural light to allow doctors to perform surgery during power cuts.

Now part of the Westin hotel chain, the hotel has been carefully renovated in a style of classical elegance to provide every modern comfort to its guests. All the rooms feature beds with soft duvets and Egyptian cotton sheets, sleek marble bathrooms, flat-screen TVs, air conditioning and Wi-Fi.

Breakfast is served in the central atrium where the La Rotonda restaurant also offers dinner each night and an opera brunch on Sundays. The hotel also has a small gym as well as a spa with wellness and beauty treatments.

One of Madrid’s most renowned properties, we love the cultured elegance of the Westin Palace Madrid and find the location very convenient for exploring.

The rooms vary in style, some featuring the same classical elegance found in the grand marble lobby, and others tranquil, modern decor. All rooms offer soft, down-filled duvets over Egyptian cotton sheets, as well as marble bathrooms with both a shower and a deep bathtub. Some rooms also boast small French balconies or a bay window with views onto the street. Flat-screen TVs, Wi-Fi and air conditioning are standard.

The Westin Palace Madrid enjoys an ideal location in the heart of the city, just steps away from the Museo del Prado, the Real Jardín Botánico and Parque del Buen Retiro. Both the Puerta del Sol and the Gran Vía can be reached on foot in around 10 minutes.

The hotel offers three restaurants. La Rotonda, where breakfast is served each morning, is situated under the impressive stained-glass rotunda at the heart of the hotel and serves classic Spanish fare with an international twist. There is also a restaurant serving traditional Chinese food as well as a sushi bar. Additionally, the 1912 Museo bar serves cocktails in the evening, with decor reflective of its early days when it hosted such figures as Ernest Hemingway and Orson Welles.

Most rooms can be connected for families visiting together, while a selection are large enough to accommodate and extra bed or cot.

A small but fully equipped gym is on the top floor and staff are happy to recommend jogging routes around the city. There is also a spa area, R’Difusión, which offers therapeutic facial, body and massage treatments, as well as an assortment of beauty treatments.

Our itineraries are there to spark ideas for how you could include a stay at Westin Palace Madrid as part of your trip. Treat them simply as suggestions, because every aspect of the trip we create for you will be yours to define.

View all accommodation in Madrid

View all activities in Spain

Madrid and nearby places 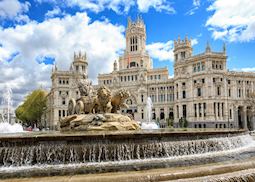