Fort Worth, The US

Since opening its doors to the public in 1907, cowboys and cattle barons, country music legends and even Bonnie and Clyde have found refuge and romance at Fort Worth's legendary Stockyards Hotel.

The main focal point of the historic district of Stockyards, the hotel is surrounded by steakhouses, saloons and honky tonk music bars and is just one street away from the Cowtown Coliseum, home to the Saturday Night Rodeo, and Pawnee Bill Wild West Show.

Abundant in character and atmosphere throughout, the hotel has 52 guest rooms and suites each unique in décor but all reflecting the Old West and yesteryear, from Victorian and Native American to mountain man and antique Western.

There is also the H3 Ranch steakhouse and Booger Red's Saloon next door to the hotel.

Fort Worth and nearby places 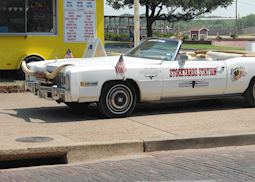