From above, the Grand Canyon is a jagged fracture in the earth, a stark reminder of the power of nature. At ground level, standing on its rim, you feel dwarfed in its presence. Glancing down, you might spot the glimmer of the Colorado River winding through the rust-orange rock it has been carving a path between for millions of years.

Points along the canyon are undoubtedly visitor hotspots, but there are ways of finding quieter settings. You could focus on the less-visited North Rim. Take a guided hike into the canyon’s interior, where fewer people venture. Or, hop between the least-crowded viewpoints on a guided 4x4 tour. Read our guide on visiting the Grand Canyon for more advice on escaping the throng.

Your first decision when planning a trip to the Grand Canyon is which rim to visit. Both have their advantages and disadvantages. 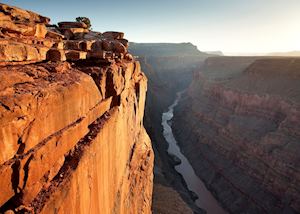 Remote and wild, the North Rim sees far fewer visitors than the canyon’s opposite side. It’s a long drive to reach it no matter where you’re coming from, so it’s almost essential to stay overnight, but limited accommodation can make this difficult.

It’s a good option if you’ve visited the canyon’s South Rim before and want to see a different side to it, or if you want to escape the crowds completely.

Standing on the rim, you have uninterrupted views over the canyon, with no sound but the breeze or distant bird calls. It’s so undeveloped here that, in places, it feels as though you could be visiting centuries ago.

While this lack of development equates to fewer activities to enjoy than around the South Rim, there’s a different kind of appeal to having the natural wonder almost to yourself. And, you can still go hiking along marked trails.

One we recommend is the 1.2 km (0.7 mile) Bright Angel Point Trail, which takes you on a short-but-steep descent to a viewpoint looking out across the canyon’s east and west sides.

The main gateway to the canyon thanks to its accessibility from Highway 40 (via Highway 64), the South Rim has the same far-reaching views as the North Rim but with more activities and visitor facilities, including shops, restaurants and hotels.

Because you can do more on this side of the canyon, it’s where we recommend visiting if it’s your first time here. You can get around on the free hop-on, hop-off bus, which takes you between the rim’s viewpoints and trailheads. 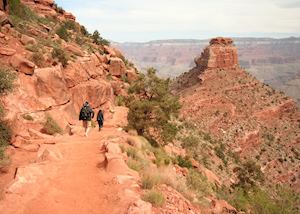 The South Rim does get busy outside winter, but there are ways of finding quieter spots. For one thing, because the terrain is flat, views over the canyon don’t change much wherever you stand, so visitors can spread out along the rim without compromising on what they see. It means you can keep walking and you’re likely to find a space all to yourself.

Another way of appreciating the canyon’s scale and raw beauty, away from the busiest areas, is hiking down into its interior. Most people stay at the top to take photographs, so you don’t have to walk far before numbers thin out.

You can follow various trails, either independently or with a private guide who can tell you more about the canyon’s formation, the stories behind its discovery and rise as an attraction, and its flora and fauna, which includes deer, coyotes and more than 350 bird species.

If you’d rather stay on the rim, you can take a guided 4x4 tour as a more personal alternative to the shuttle bus. Your guide will give you an insight into what you’re seeing and can take you to the sections that are least busy or most suit your interests. They’ll also share anecdotes from their time in the park and point out features of the landscape.

For a better sense of its depth and scale, you can soak up bird’s-eye views of the canyon from a helicopter. Short flights take off from the town of Tusayan, just south of the rim, and propel you over the edge. You pass over the more heavily forested North Rim, as well as the Dragon Corridor — the widest and deepest section of the canyon.

To avoid the scorching summer months, visit between April and May or September and October. During the winter, snowfall makes the South Rim difficult to get to, and the North Rim becomes inaccessible.

Our itineraries will give you suggestions for what is possible when you travel in Grand Canyon National Park, and they showcase routes we know work particularly well. Treat them as inspiration, because your trip will be created uniquely by one of our specialists.

We’ve selected a range of accommodation options for when you visit Grand Canyon National Park. Our choices usually come recommended for their character, facilities and service or location. Our specialists always aim to suggest properties that match your preferences.

Our specialists seek out authentic ways to get to know the places that could feature in your trip. These activities reflect some of the experiences they've most enjoyed while visiting Grand Canyon National Park, and which use the best local guides.