A blanket of thousands of spires, fins, pinnacles and mazes of dazzlingly colored rock cover the spectacular Bryce Canyon National Park in southwest Utah. Despite its name, the park does not protect a canyon but a series of giant natural amphitheaters along the eastern side of the Paunsaugunt Plateau. 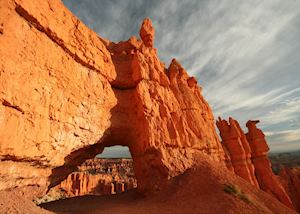 Visitors can follow a network of walking trails around this surreal landscape to inspect the rocks at closer range and get panoramic views of the canyon floor. There are many scenic views into Bryce Amphitheater, the best known of which are from Sunrise Point and Sunset Point, but possibly the most dramatic of all views is from Bryce Point. From here you can look upon most of the park itself as well as the Henry and Escalante Mountains.

Our itineraries will give you suggestions for what is possible when you travel in Bryce Canyon National Park, and they showcase routes we know work particularly well. Treat them as inspiration, because your trip will be created uniquely by one of our specialists.