The midway point on Route 66 between Chicago and Los Angeles, Amarillo is a small city in the Texas Panhandle known as the Yellow Rose of Texas, a play on its name (Spanish for yellow). At first glance, it seems fairly nondescript, notable only for its bricked roads. But, Amarillo offers a quintessentially Texan experience, with a few quirky attractions, a roadside steakhouse and a strong sense of the American West. It makes a good place to spend a night on your trip along the Mother Road.

If you’re driving the length of the storied highway and hoping for a glimpse into its glory days, we suggest visiting Amarillo’s Route 66 Historic District. This one-mile stretch sports carefully preserved shops and theatres from the highway’s heyday, which have been converted into cafés and hip boutiques. 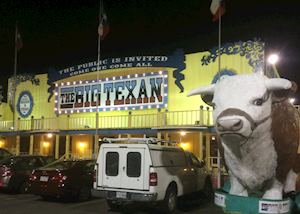 One of the district’s most distinctive sights is the Natatorium, also known as the Nat Ballroom. A plain-faced stucco building with crenelated parapets, it has been a swimming pool as well as an Art Deco ballroom that hosted the likes of Duke Ellington and Tommy Dorsey. Today, it’s an antique market.

Another relic of the era located right on Route 66, the Big Texan Steak Ranch and Brewery serves steak, burgers and beer to hungry drivers and locals alike. It’s easy to spot thanks to the bright yellow and blue paint job, as well as the towering billboard shaped like a cowboy. In case you missed those markers, there’s also an oversized cow and an enormous green dinosaur wearing cowboy boots.

Inside, you’ll find walls overstuffed with cowboy-country kitsch, long wooden tables where diners eat family style, and a menu that prominently features the 72-ounce steak challenge. If you can eat a whole one of these (a bit over two kg) plus sides, you’ll get your meal for free.

Amarillo has long been the economic hub of the region, and you can find several niche museums dedicated to Western topics. The American Quarter Horse Hall of Fame & Museum celebrates the short, stocky breed once known as steeldust horses, which were preferred by local cattlemen. The Amarillo Railroad Museum examines the romance and reality of rail travel through the Panhandle with a sprawling multi-floor model display and several pieces of full-sized vintage equipment. 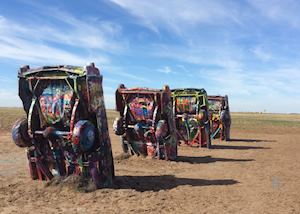 Amarillo also boasts an unusual amount of public art, thanks largely to the support of Stanley Marsh 3 (he preferred not to use the Roman numeral III in his name). A wealthy, controversial figure who was dogged by scandal in his later years, Marsh funded the city’s most notable landmark: Cadillac Ranch.

You can visit this striking bit of absurdist Americana on the western edge of the city, just off the side of Route 66. It’s technically on private land, but members of the public are welcomed and even encouraged to come and see the display.

In 1974, a small art collective called Ant Farm buried ten Cadillac cars nose-first in the Texan prairie. They stand in a tidy row, slanted at an angle that’s said to mimic the sides of the Pyramids of Giza. Over the decades, Cadillac Ranch has become a canvas for graffiti artists, and the cars all have a constantly changing coat of bright tags and impromptu art. Bring cans of spray paint to leave your own mark.

A half-hour south of the city, you can hike, bicycle or horse ride through the Palo Duro Canyon State Park, the country’s second largest gorge, after the Grand Canyon. Here, you’ll find a striking landscape of desert brush and red stone that has been sculpted by wind and time into towering mesas and jagged mountains striped with ochre, rust, sandstone and deep-red clay. Rangers offer different guided tours, focused on a variety of subjects, including local birdlife, the park’s historic stables, and even a longhorn cattle drive.

Spring (March to May) and autumn (September to November) both offer comfortable temperatures, sunny skies and fewer visitors, making them the best seasons for visiting Amarillo. June to August brings lots of festivals, but also very high heat and crowds. The crowds slacken in the winter, when the days are brisk and the nights fall below freezing. 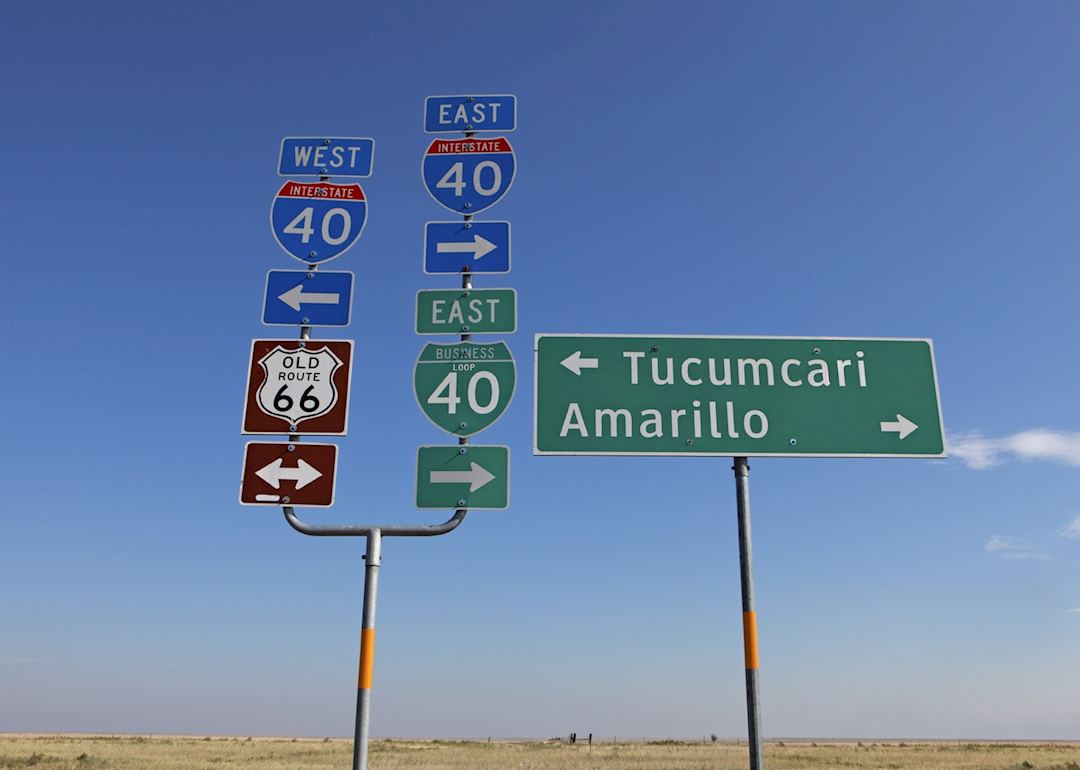 Start planning your trip to Amarillo