What to do in Vietnam: our highlights guide

By Southeast Asia specialist Will

Hanoi, Saigon and Halong Bay are the justifiable celebrities of many tours, but Vietnam’s small touches are just as rewarding – a morning’s visit to the Cai Rang floating market on the Mekong Delta or trekking around the remote farming communities north of Hanoi, where life ticks to the cycle of the rice harvest.

And, with a bit of know-how, Hanoi, Saigon and Halong can take on different perspectives: Saigon from the back of a Vespa after dark, Hanoi in the company of a street food expert and Halong from the window of a sea plane.

The tastes of Hanoi

Vietnamese food is a real highlight in itself, and it changes as you go through Vietnam from north to south. Hanoi is the city that wakes up first in Vietnam and morning sees the locals queueing at cafés for pho noodle soup, a breakfast pick-me-up of beef or chicken spiced with ginger. Once served, the pho is devoured from tables that sprawl over the sidewalks, and you can join in the ritual on an early-bird tour of Hanoi.

Street food in Hanoi is often the most satisfying, and you can also accompany a local food blogger on a tour that showcases some of the foods found on the market stalls. Among other things, I tried banana flowers, bang tom (shrimp-fried pancakes) and Vietnam’s fast food, banh mi (baguettes filled with pâté, cucumber, herbs and chilli), washed down with local beer and sweet Vietnamese coffee.

Halong Bay – by boat or plane

The lure of Halong Bay for the many travellers who take to its waters is a combination of a trip on a traditional junk boat and the scenery – limestone karst islands jutting out of the water, some up to 100m tall. Despite the inevitable congestion this UNESCO World Heritage Site suffers from at sea level, touring the bay by boat is still a highlight.

And, it’s now possible to leave the crowds and appreciate the landscape from a totally different vantage on a seaplane flight over the bay, still tagging on a boat trip at the end after landing in the marina. Boarding the seaplane at Hanoi skips the three-hour car journey to Halong Bay in favour of a 40-minute flight.

Tailor’s shops and bicycle tours in colonial Hoi An

You can’t walk down a street in Hoi An without spotting a tailor’s shop, a legacy of this old trading port on Vietnam’s central coast. Influences from Hoi An’s days as a merchants’ city are still very evident in the Chinese and French architecture.

The fabrics used by the tailors are as good as you’ll find anywhere, but suits and dresses are run up for a fraction of the price. Turnaround is quick: your first fitting within 24 hours and a finished garment a day later.

The old areas in Hoi An are compact and pedestrianised and most of the hotels will supply bikes for getting around. Cycle down any of the alleyways that lead off the main thoroughfares and you could end up by the river, at a market or find a café or restaurant that’s hidden away.

Of Indochina’s temples, Angkor Wat in Cambodia gets the headlines but it’s pre-dated by Mỹ Sơn, 40 minutes outside Hoi An. Both complexes are of a similar style, and if your trip allows I would go first to Mỹ Sơn and then to Angkor for a chronological introduction to the temple-building achievements of the Cham people.

Located off the south coast of Vietnam, and actually closer to Cambodia, Phu Quoc is an island where the beaches are a quiet contrast to the central beaches of Vietnam.

A new airport has made the island much more accessible, and the most isolated beaches - palm-lined fine white-sand - are a 20-minute drive away. Most beaches only have one resort, and it’s rare to be in a hotel in Phu Quoc and look out and see another.

You don’t need to venture too far in to the pristine waters before you can look down and see small fish weaving and darting in the water around your feet.

Phu Quoc is also a working island. The fishermen haul in their catch in the early morning and the local food speciality is barbequed seafood cooked on the beach.

In Mai Chau Valley, a three-hour drive up and over the mountains from Hanoi, the centuries-old pattern of life for the White Thai inhabitants is bound around the twice-annual rice harvest.

Not many travellers get to see these local villages and their surrounding rice paddies, best visited just before harvest in October/November or again in April when the paddies, drunk from the rains, have taken on a near-luminous shade of green.

The local people take great pride in the strong wine they make from their rice and corn crops, and they’ll happily invite you into their homes to try it. A little note of warning: I was offered a glass at ten in the morning and it’s considered bad manners to decline. A typical house is built on stilts, as a flooding precaution, with the outside space below used for cooking and keeping the animals.

A market vendor in the authentic markets of Northern Vietnam

Lively local markets take place in and around the northern hill town of Sapa - a train ride from Hanoi heading north-west - on Tuesdays, Wednesdays and Thursdays, and over weekends (Saturdays being the busiest).

While most visitors restrict themselves to touring the markets within 45 minutes of Sapa, I’d suggest journeying further afield – up to an hour and a half – to find the more authentic markets. Here, you’ll be surrounded by the local people, who wear bright, embroidery-embellished traditional dress, who’ve come down from the hills to trade produce and tools.

Further east from Sapa, the conical mountains of Ha Giang provide the most unspoiled landscape in Vietnam. This is Vietnam at its most untamed, home to weekly markets and a rural existence unchanged for centuries.

Vibrant Saigon by night on a Vespa

As Hanoi slumbers, Saigon ignites in the evenings, powered by the noise of a million mopeds, which far outnumber the cars on Saigon’s streets.

Vespa tours take in the outer reaches of the city, away from the crowded central District 1. Sitting on the back of a bike, weaving through the traffic, is an experience I’ll long remember. Your driver drops you at cafés, street food stalls and bars, where you join up with your guide who’s been following behind.

The food is varied and adventurous (such as the pleasantly surprising fried frog I sampled at one local café). This was followed by a class in making Vietnamese spring rolls under the tutelage of a street vendor.

As the night grows longer, your guide will lead you on to try local beer and coffee and listen to live music. And, if you’re game, you can end the night in a more upbeat club, or be chaperoned back to your hotel, in my case a little windswept but very exhilarated.

Cruise the Mekong and see the floating markets

The Cai Rang floating market in Can Tho

Can Tho is the major hub city in the Mekong Delta and from where converted rice barges, now private floating hotels, depart down the river. Spend two days and one night on board accompanied by a local guide, stopping to explore the villages along the way.

You’re awoken at daybreak on the second morning by the sounds of the Cai Rang floating market, my highlight of the Delta. Transferring to a smaller boat, you’ll navigate through the gaps between the hundreds of goods-laden boats that converge to trade, forming the biggest example of a floating market along the Delta.

Sometimes four or five boats will line up to do business, traders shouting and gesturing as they haggle. You can partake and barter to buy breakfast or an iced coffee – mine was presented, boat-style, in a plastic bag with a straw.

It took years to map out the epic cave network in the Phong Nha-Ke Bang National Park. Now open to visitors, adventurers can take on a seven-night expedition into the caves, or you can opt, as I did, for the two-day trek with an overnight camp at Hang En, the world’s third-largest known cave.

The trek starts down river valleys and through villages, before entering the caves. Hang En is over 100 metres high and, such is its vastness, has its own beach – where the camp is set up - and a river running through it. The evening meal is a barbeque on the sand.

The caves are accessed from the town of Dong Hoi, best reached by air from Hanoi or Saigon.

Staying with the Co Tu on a homestay at Bho Hoong

In the foothills of the Truong Son Mountains lies the village of Bho Hoong. Around 39 miles from Hoi An, it’s home to the Co Tu minority people, and you can spend the night with them on a homestay. The accommodation is one of five traditionally styled bungalows.

The evenings are full of socialising with the locals. The town inhabitants come together to eat communally and take it in turns to cook meals. With something different on the menu each night, it’s likely to be one of the most authentic meals you have in Vietnam. 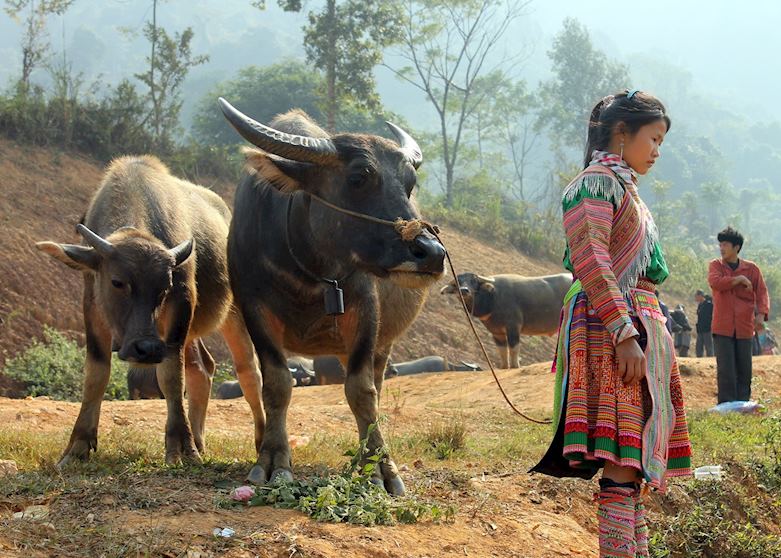 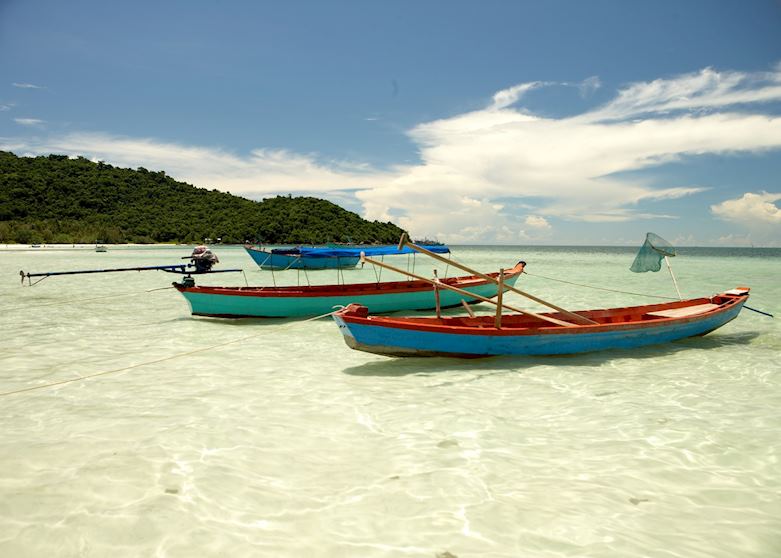