Set amidst the granite domes and kopjes of the Matobo Hills, Amalinda Lodge is a characterful safari lodge housed within an ancient bushman’s shelter.

The thatched dining and lounge areas are spread across different levels of rock and offer a laid-back, rustic African atmosphere, with stripped down tree branches acting as pillars, wooden furniture and colourful sofas set within quiet alcoves in the rock, and a cosy library offering a good selection of African classics.

There’s also an infinity pool with a bar area where guests can relax on warm days, while in the evening everyone gathers around the campfire to share sundowners and stories.

Amalinda’s setting is incredibly peaceful, and we love the unique and individual design of its rooms, as well as the infinity pool with its far reaching views across Matobo National Park.

There are just a small number of thatched rooms and suites, giving the camp an exclusive feel. All accommodation is built into the granite boulders, echoing the rustic style of the communal areas but with individual touches. The Lobengula, Rhodes and San Suites are particularly spacious and are adorned with African antiques, and there are several family rooms featuring two double beds, with the rest of the rooms featuring one double bed or twin beds. All have en suite bathrooms built into the rock, comfortable seating areas and tea/coffee making facilities, with some offering an outdoor decking or patio area.

The camp is situated within the dramatic scenery of the Matobo Hills, a UNESCO World Heritage Site that’s home to the highest concentration of rock art in southern Africa. The rock art was created by San People and depicts their beliefs and way of life. The area also has good populations of wildlife, including leopard, black eagle and the endangered black and white rhino.

Meals are served on the large teak table in the open-air dining room, which offers sweeping views of the surrounding rocks and trees. These are delicious set meals, and dietary requirements are taken into account. The camp has a natural cave wine cellar and two bar areas serving local and imported drinks. Post-dinner drinks can be enjoyed in the boma area, which provides good stargazing opportunities.

There are a number of family rooms available for up to four guests. The camp is in a malaria-free zone. As it’s spread across various different levels in the rock, this camp may be unsuitable for those travelling with very young children.

At the camp guests can make use of the swimming pool, which is surrounded by loungers and overlooks a waterhole. There’s also the Heritage Spa, offering massages, manicures and pedicures, and a peaceful chess room. Guided walks around the camp are offered, giving you the chance to see zebra, antelope, warthog and a variety of birdlife.

Game drives and walking safaris can be enjoyed around the nearby Matobo National Park, as well as rhino tracking excursions by vehicle or on foot led by experienced and knowledgeable guides. You can also explore the area’s ancient rock art and discover the rocks that the San People saw as spiritually significant on guided tours, or trek to the grave of Cecil Rhodes, who served as Prime Minister of the Cape Colony in the late 19th century.

Matobo National Park and nearby places 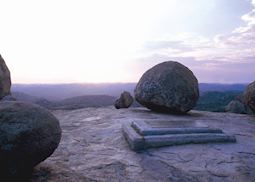