Love wildlife? Not fond of boats? Why you should consider island-hopping in the Galapagos

I recently returned from a trip to the Galapagos Islands, where I spent seven days and six nights hopping between three of the archipelago’s largest inhabited islands. I started on Santa Cruz, which acts as the gateway to the Galapagos, and stayed in the mist-soaked highlands, its forests thick with ferns and spongy lichens.

Then I went south to Floreana, a farming island with only 150 inhabitants, and many-shaded beaches: starkly white coral shores, black volcanic sand, and even green sand made of olivine crystals.

We ended west, on Isabela, the largest of the islands. This is a landmass created by six shield volcanoes, and bearing the scars of long-cooled lava flows amid its vegetation and brackish lagoons.

Being land-based really opened my eyes to the fact that you don’t have to be a devotee of boats to enjoy a Galapagos tour. Granted, even if you’re staying on terra firma rather than an expedition cruise vessel, you’ll still need to use boat transfers to get from island to island. And choosing island-hopping means you’re limited to staying on the inhabited islands only, which can mean you miss out on viewing species such as waved albatrosses (only resident on the farther-flung Española Island).

But these are, for me, the only downsides. Here, I’ve tried to pinpoint the main draws of choosing to explore the Galapagos through island-hopping.

You’ll see there’s more to the islands than wildlife… 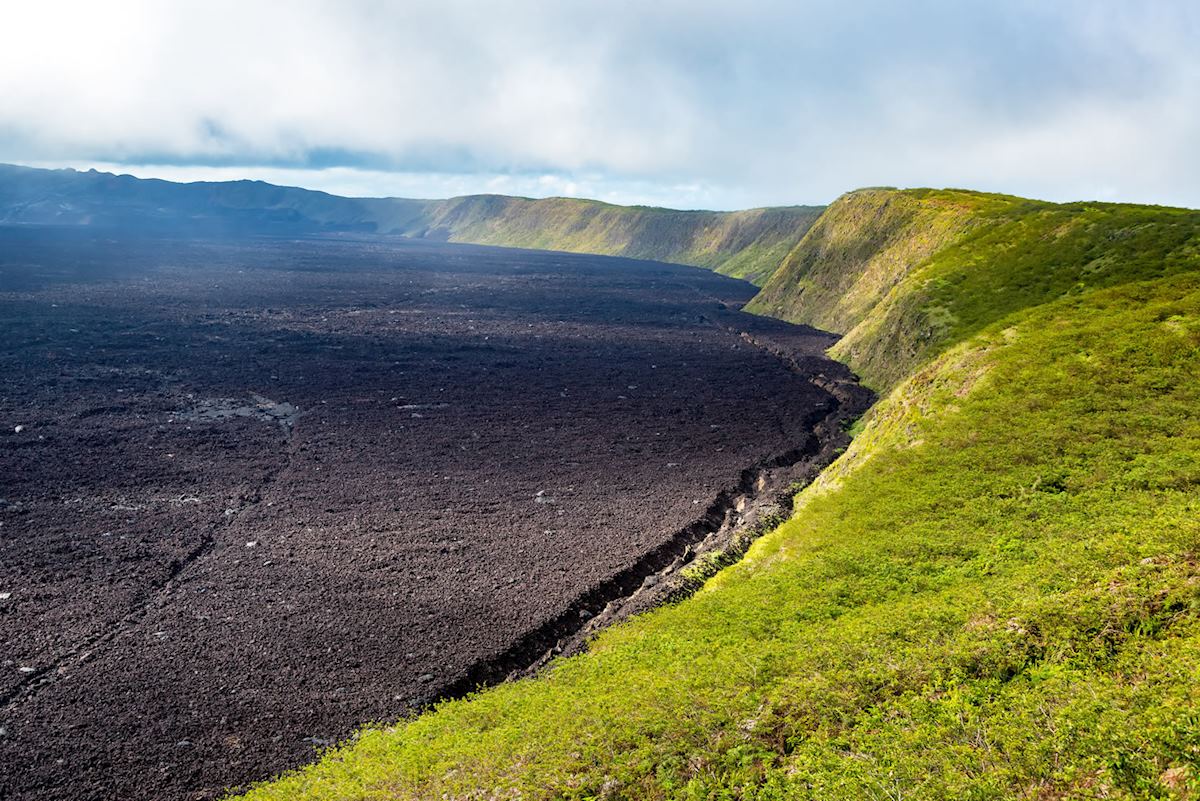 While the many endemic, fearless species are the main draw, island-hopping showed me other sides to the Galapagos that receive far less fanfare, such as the human history, or the volcanic landscape of the Sierra Negra caldera (more on that, shortly).

While staying at the Floreana Lava Lodge, a cluster of pinewood cabins overlooking black lava sands, I got chatting with the owner, Claudio, who is descended from one of the island’s oldest families, the Cruz family. Over a hearty barbecue dinner of seafood and vegetables from his own farm, he regaled us with stories of the island’s settlers from the 1790s onward.

It reads like something out of a picaresque novel, or a work by Gabriel Garcia Márquez: we learned how, for example, Floreana was first inhabited by a German baroness who took two lovers (it ended in murder). And also how the first baby ever to be born in the Galapagos came into the world in a buccaneers’ cave on Floreana.

Likewise, my guide on Floreana (and my guide throughout the trip), Pedro, had grown up on the island, and knew it intimately. He could point out which plants had medicinal properties (‘chew on this,’ his dad had once said, tossing him a root when he complained of toothache) and where to find the medium tree finch — an extremely rare, endemic bird, despite the underwhelming name.

… but there are still plenty of opportunities for wildlife-viewing 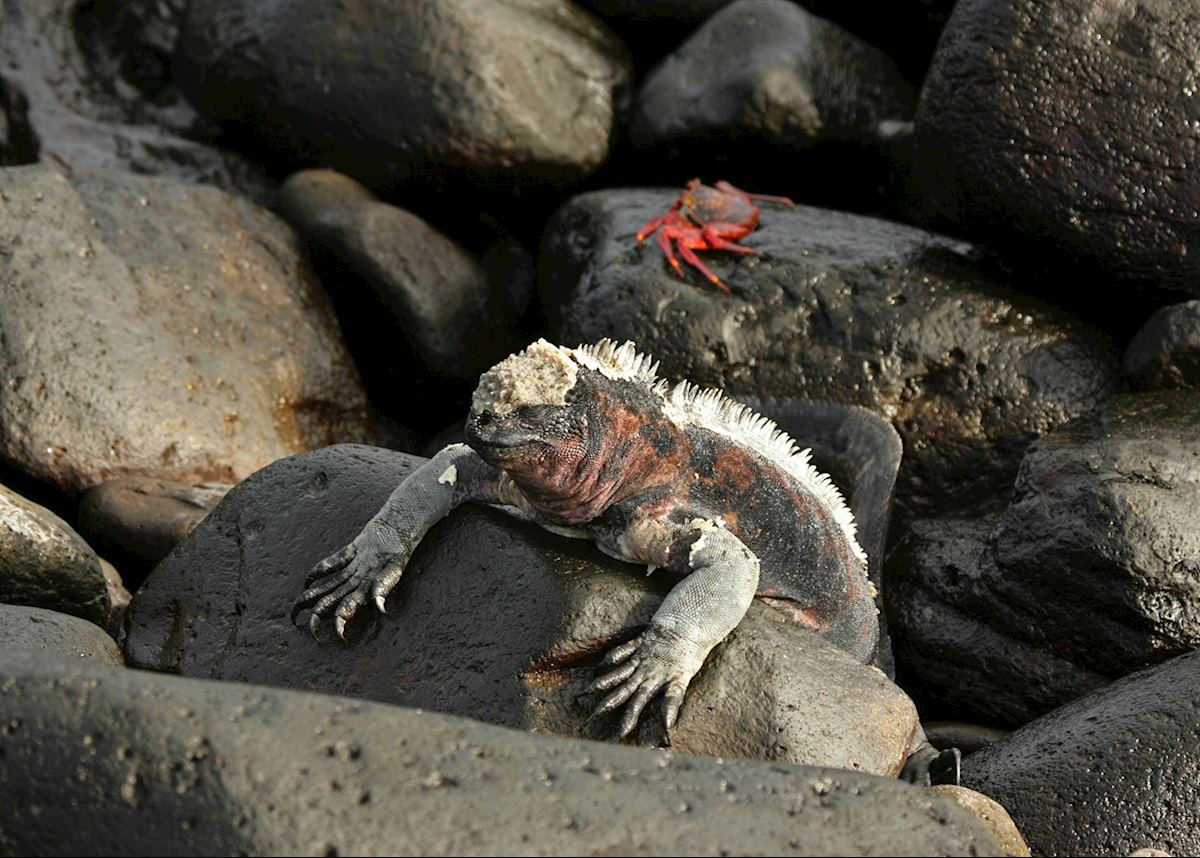 Snorkeling in shallow water off the basaltic island of Bartolome (visited on a day trip from Santa Cruz), sea turtles bobbing like corks alongside me. Walking through the marshy wetlands of Isabela, stepping over marine iguanas and watching them munch on cacti. (Later, while snorkeling in La Concha de Perla, a shallow bay hidden among mangroves, one swam right past my nose.) Passing hordes of blue-footed boobies sunning themselves on the rocks of craggy islet Las Tintoreras, near Isabela. Seeing hybrid tortoises shuffling around freely in a breeding project on Floreana.

I experienced all of the above, and more, while island-hopping.

There are even accommodation options which allow you to immerse yourself in wildlife. For example, at the Galapagos Safari Camp on Santa Cruz, the scalesia trees sing with native birds, including Galapagos doves and mockingbirds. And don’t be surprised if you wake one morning to find giant tortoises plodding their way through the camp.

There’s much more flexibility (and privacy) than on a cruise 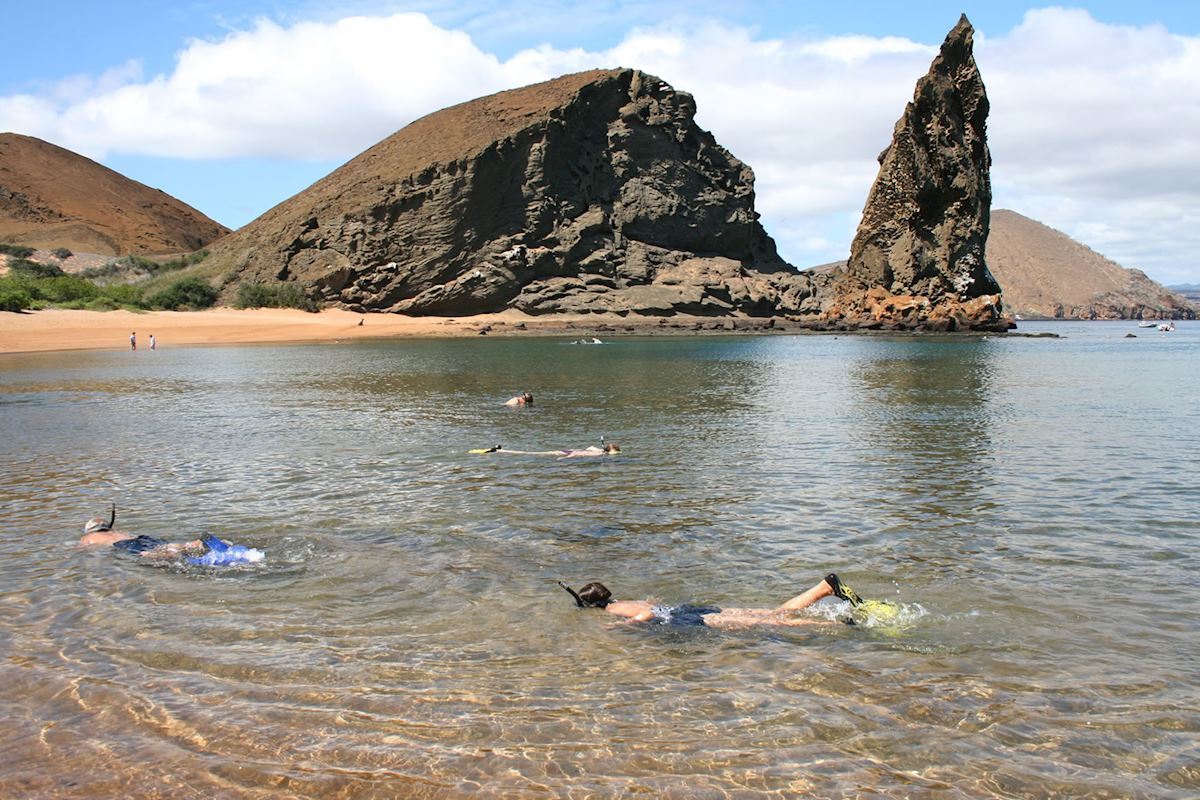 Snorkeling in the Galapagos

Itineraries and timings are notoriously rigid on expedition cruises, whereas island-hopping tours can be tweaked and tailored. A good example of this occurred during my time on Floreana.

My small group and I were scheduled to visit La Lobería, a sea lion colony just off the coast. But the only way to get there was to snorkel. The sea was a little rougher that day, and not being the greatest of swimmers, I was a little apprehensive. So my guide arranged for me to take a short hike around the bay by myself. I spied orange-headed lava lizards as I walked through the clifftop scrub vegetation overlooking the ocean and the sea lion colony below.

Similarly, the next day, we had some unscheduled time in the afternoon to spend as we wished. Some of the group went kayaking, some tried stand-up paddle boarding, and others just took time out and sat on the beach.

You can also island-hop on a private, as well as a group, basis: a good option for honeymooners.

There’s scope to be more active 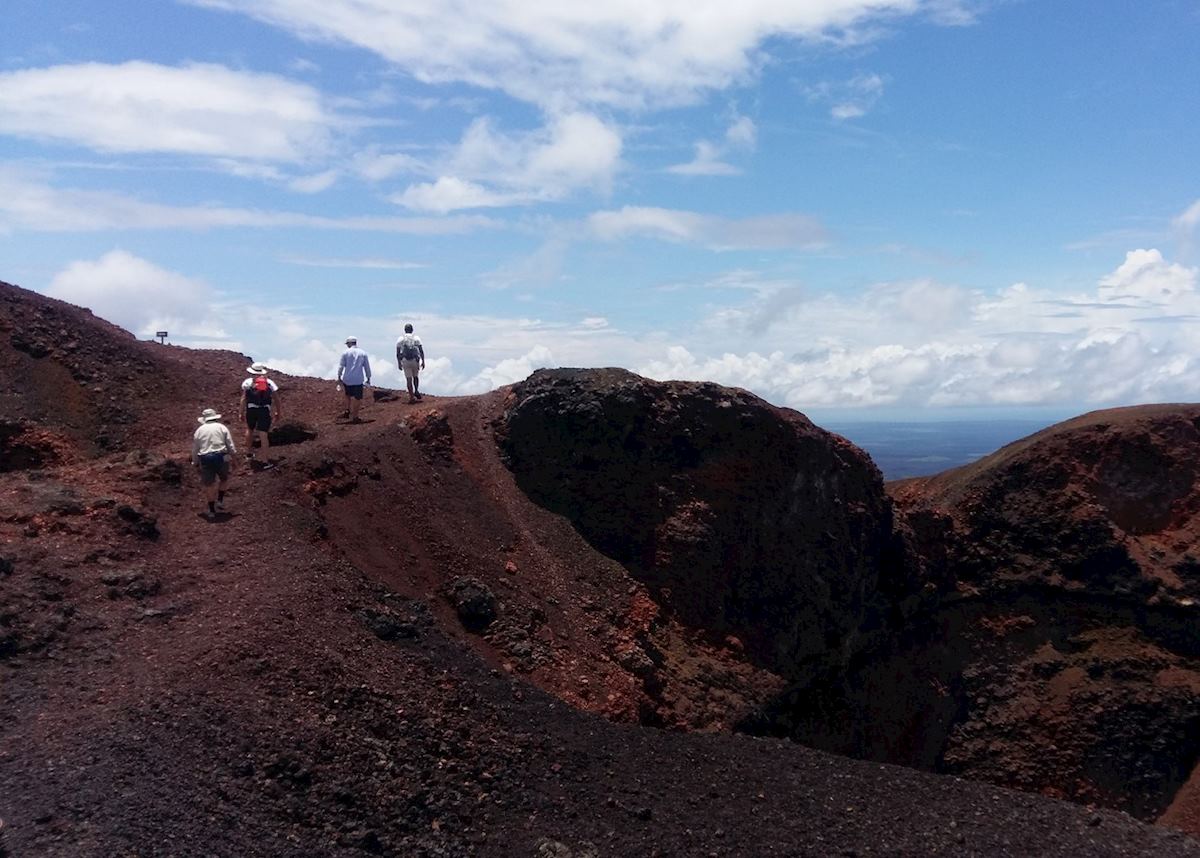 Expedition cruise passengers sometimes have the chance to hike to the Sierra Negra shield volcano, but they rarely have time to carry on to Volcán Chico, as I did. This small group of small craters and fissures is located a little farther on from the main caldera. The entire hike is around 16 km (10  miles) and takes between five and six hours.

The hike begins in frothy greenery. Looking uphill, you can see where lava flows have dribbled down from the crater rim, now a charcoal black mass of solidified whorls, bubbles and ripples. Reaching the caldera itself made me gasp: at 9.6 km (6 miles) wide, it’s a huge, yawning hole in the Earth; you can barely see across to the opposite rim.

As we pushed on to Volcán Chico, the landscape turned starker, more alien. The ground under my feet turned rusty red; clumps of scrub grew in the moist vents of fumaroles. The smell of sulphur became intense. I passed twisted, gnarled claws of molten rock, and my guide explained how the different shades of its layers indicated their age: the most recent were smoky-black, the older burnt red and copper.

Totally exposed and walking in blistering heat, the hike began to feel strenuous. But the view from Volcán Chico soon rewarded us. The ocean glowed bottle green, the shape of Fernandina Island a blurry mirage on the horizon.

Start planning your trip to the Galapagos Islands 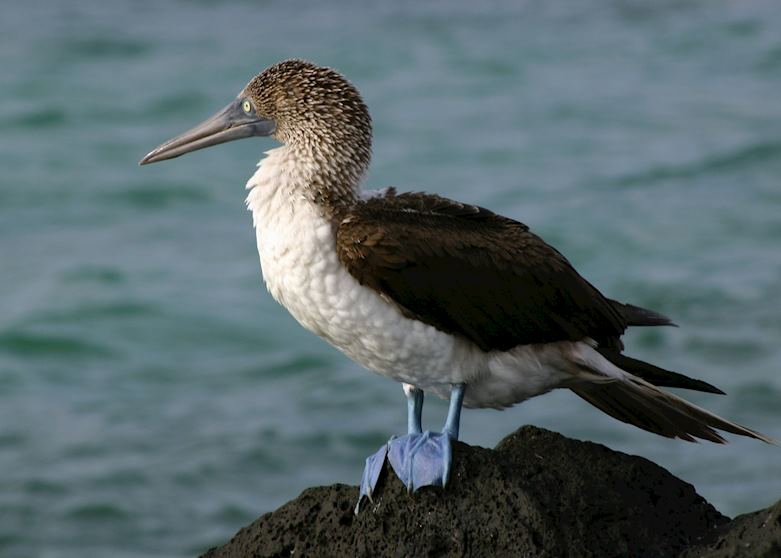 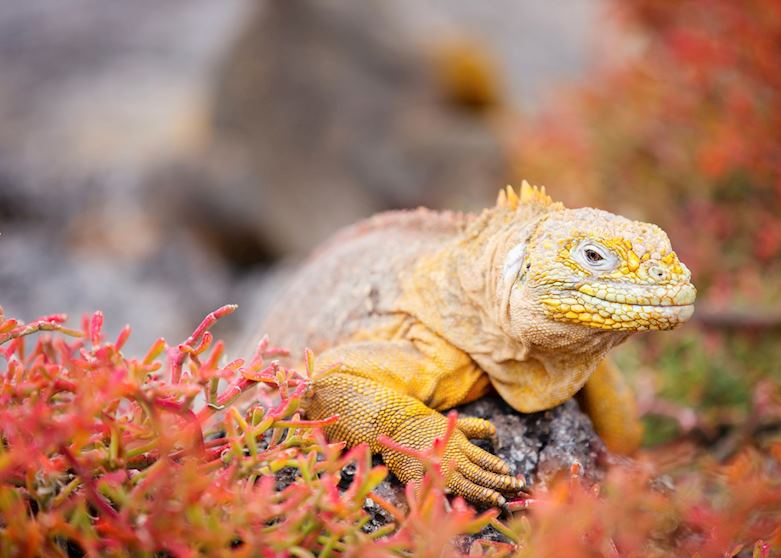 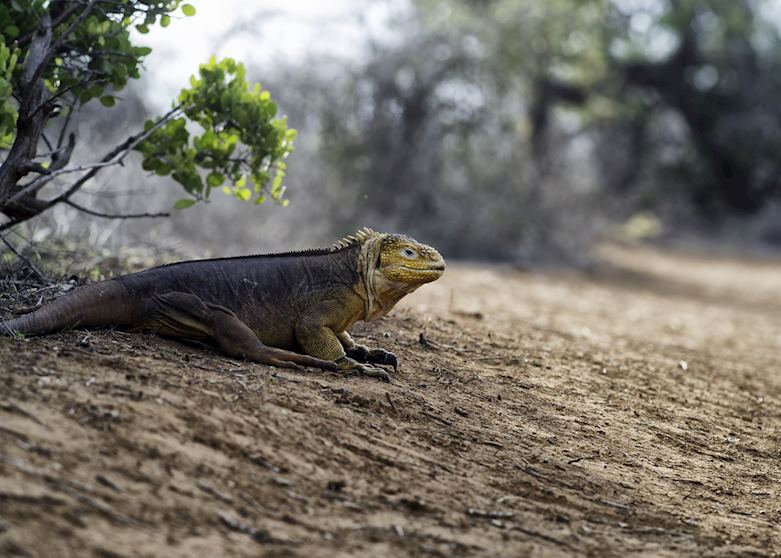