Situated just a 40-minute drive from Kuching, Santubong sits under the spectacular 810 metre peak of Mount Santubong. The area is home to some of Sarawak's finest beach resorts, and is popular due to its easy accessibility. The headland itself is covered in secondary forest. The peninsula was once the sight of an early trading settlement, but stretches of its golden sand coastline have now been developed as a retreat for weary travellers. 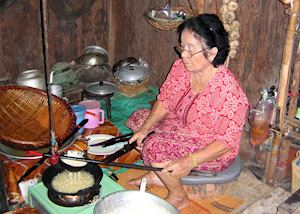 The Sarawak Cultural Village is just a few minutes from the beach and trips are easily arranged from your hotel. This is a living museum depicting the heritage of the ethnically diverse racial groups in Sarawak. There are handicraft demonstrations, and you also have the opportunity to join in. Meanwhile, a 45-minute cultural performance of songs, dances and entertainment is a fascinating insight into the local cultures of the area. Since 1998, the Sarawak Culture Village has been home to the annual Rainforest Music Festival, now usually held during the second weekend of July. While the event attracts performers from across the globe, it is also a great opportunity to watch indigenous Bornean musicians.