Vietnam was where Audley first began creating tailor-made trips, and we still have the most up-to-date information of any tour operator.

All of our Vietnam specialists have a passion for the country and all have spent considerable time inspecting hotels and researching new excursions. Our guides do not just provide fascinating insights into Vietnamese life: many become lasting friends.

Most of our itineraries are based around a journey from Hanoi to Saigon, taking in central Vietnam en route, although we also include many of the country’s lesser-known sights that are often overlooked by other operators.

To the east of Hanoi we explore the limestone islands of Halong Bay, to the north, the hill tribe communities of the Tonkinese Alps, while south of Saigon we travel through the flatlands of the Mekong Delta experiencing rural Vietnam at its best.

The country stretches for over 1,600 km (994 miles) from north to south so we often travel the longer distances by air, with private vehicles covering the more interesting overland sections. Vietnam also combines well with Cambodia’s Angkor temples or a visit to hidden Laos.

With its French colonial heritage, Vietnam has been quick to use its splendid buildings to good effect and turn them into the finest hotels in the region. Many are located in the heart of the old towns, ideally placed to explore the nearby restaurants and markets.

All the hotels we use have been handpicked by our staff for their location, character or individual appeal. The coast here is much less developed than in nearby Thailand or Malaysia, and there are some wonderful beaches where we use sophisticated resorts or small family-run guest houses.

To explore further afield we can use homestays in the Mekong Delta and the Tonkinese Alps. A night or two in a converted merchant’s house in Hoi An or Hanoi represents an unusual alternative.

Perhaps not surprisingly, Vietnamese is the official language. It is a tonal language and uses the Roman alphabet together with tone and diacritical marks. There are a huge variety of regional dialects and numerous other languages such as Chinese, Khmer and Lao across the country. The older generations still speak French, and Russian is still spoken and understood by the middle aged. European languages have fast become popular with the younger generations of Vietnam with English being widely understood and spoken.

Vietnam has a wonderful array of culinary delights making its food and drink one of the many highlights of any visit to this fascinating country. The most famous dish must be Pho rice noodles. Extremely popular, this dish is happily eaten at anytime of the day though is especially popular for breakfast as it provides a hearty meal to keep you sustained throughout the day. Spring rolls are another popular snack and come in many guises. Local specialties include fish cooked in banana leaf and white rose (steamed prawn dumplings) in Hoi An, Pork cooked with caramel in a clay pot in Saigon and the spectacular elephant ear fish in the Mekong Delta. Vietnamese dishes are not complete without nuoc mam (a potent fish sauce) or mam tom (shrimp sauce).

Coffee is served strong and is sweetened with condensed milk, a guaranteed pick me up. Local and imported beers are popular and widely available at relatively inexpensive prices. Rice wine is also very popular and cheap, though extremely potent. Imported wines are often available at up market restaurants though at a premium.

Tipping is very much a part of Vietnamese culture especially in the service industry and you should be prepared to tip guides, drivers and porters who assist you during your stay. As a guideline if you are traveling alone we would recommend that you tip your guide between $7-8 per day, if traveling in a couple then allow $8-10 per couple per day. When traveling in a group of 3-4 then tipping in the region of $10-15 per group per day is appropriate, when traveling in groups larger than four then allow an increase roughly equating to 10% more for each additional person in the group.

The US Dollar is the most favored foreign currency. British pounds and Euros can usually be changed in the larger cities; great difficulty may be encountered in trying to exchange any other currencies.

In general the Vietnamese dress standards are very conservative especially in areas away from the main towns and cities. When visiting temples and religious sites it is best to avoid shorts and sleeveless t-shirts to be respectful.

It is considered very unlucky to leave chopsticks sticking up in a bowl of rice, as they resemble incense burned for the dead and is considered a powerful omen.

Do not take photos of people without asking permission first.

When to go to Vietnam

You'll find temperature and rainfall information, together with a month-by-month guide on visiting, on our guide for when to go to Vietnam.

Start planning your tailor-made vacation by contacting ​one of our certified Vietnam specialists... 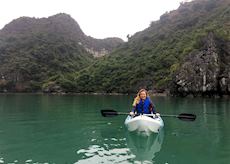 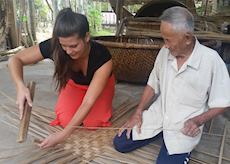