Situated in Newfoundland’s oldest collection of mercantile buildings, dating to 1846, the Murray Premises Hotel has maintained much of its original character, featuring exposed stone walls and original wooden beams. Over the years, the site housed warehouses, offices and machine shops, and even survived the Great Fire of 1892, which destroyed much of the city.

Opening in 2000 with 28 rooms, today the hotel features 69 guest rooms, having expanded into other sections of the buildings. Each room has its own personality, differing in size, layout and character. The property’s harbour front location means you can watch ships come and go from your room, while the shops, restaurants and pubs of Water Street and George Street are just steps away. 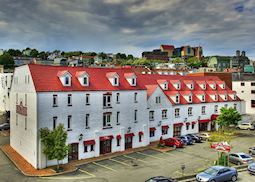 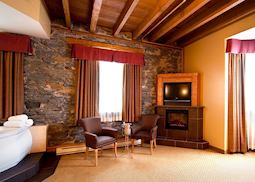 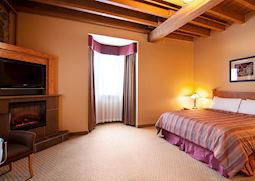 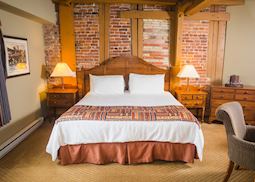 The spacious rooms are divided between two wings and several different categories, including Standard King and Queen rooms, King Deluxe rooms, Signature King rooms and larger Executive rooms. They each have an individual style and layout, but most feature exposed brick or stone walls, wooden beams and columns and, in some cases, views over the harbour. Custom-made maple furniture and thick duvets create a warm atmosphere, and the large en suite bathrooms feature walk-in showers and heated floors. Amenities vary according to room type, with some offering Jacuzzi baths while others have sitting areas with electric or stone fireplaces.

The hotel is located just off Water Street, St John’s main street, which is believed to be the oldest street in North America. It’s therefore within walking distance of the many shops and restaurants in downtown St John’s. On the other side of the property is the harbour, which many of the rooms overlook.

A continental breakfast buffet is set out in the breakfast room each morning, comprising a selection of breads, cheeses, cereals and fresh fruits. Mediterranean-influenced cuisine is served in the on-site Evoo restaurant, which is open to the public. There’s also The Gypsy Tea Room, which serves a variety of European dishes. Alternatively, dine in one of the many restaurants lining Water Street, or head to the pubs of George Street, just behind Water Street, for a drink.

Just off the reception area is a lounge with seating, a fireplace, and complimentary hot drinks and snacks. Free parking is available on site.

The hotel has two wheelchair accessible rooms situated on the ground floor.

Conveniently located off St John’s main street and with views over the harbour, Murray Premises Hotel offers a characterful stay in the heart of town. We like its strong sense of history, along with its spacious, well-appointed rooms.