What to do in French Polynesia: our highlights guide

Before touching down in French Polynesia, I’d envisaged beaches lined with thatched overwater bungalows. And, the bungalows were just as beautiful as I’d imagined. But, actually, what I remember most are the hiking trails through inland jungle, coral reefs bristling with creatures and trying the French-Polynesian food.

Your experience of French Polynesia begins before you’ve even set foot on an island, as you fly over the array of 118 islands scattered over an area the size of Europe. From here you can glimpse the pale blue lagoons, volcanic peaks and flourishing foliage of the inland national parks. There’s a lot of explore here, but do make sure you take the time to enjoy those bungalows, too.

Situated next to the international airport, Papeete is the capital of French Polynesia

Home to French Polynesia’s only international airport, Tahiti is a necessary stop before island-hopping onwards. In the heart of the archipelago, it’s a bustling base for commerce with flower markets, busy offices and a palm-edged port. While lacking in white sandy beaches, it’s an unassuming example of modern Polynesian life – I’d suggest staying to explore.

For me, the black sandy beaches that intersperse the rocky coast, pounded by waves from the Pacific, are a real sign of the exotic. Most visitors stay on the coast, so delve a little further inland and you’ll see few fellow visitors in the lush mountainous interior or local towns.

Taking a guided tour around Punaauia, a town on the west coast, you can explore the missionary churches and Cathedrale Notre Dame, set in well-kept tropical gardens. It’s worth taking a short drive to the Musee de Tahiti on the outskirts of the town, which gives an overview of French Polynesian geography and history.

Strolling around the botanical gardens, a short drive from Punaauia, is a pleasant way to end a tour. In the shade of the glossy ferns, you might come across one of the resident Galapagos turtles. Plants from all five of French Polynesia’s archipelagos are gathered here along with plants imported from around the world, some with quirky names such as the miraculous fruit. Try a local ice cream speciality, made with coconut milk and rum from the gift shop.

Eat local delicacies at the Roulottes of Papeete

There’s a plethora of chic and elegant restaurants on Tahiti, but you’ll find the locals head down to the Roulottes in the early evening.

Whole families gather together at tables set across a bustling square on the quay. Food trucks pull up, winding in their metal shutters to reveal busy, tiny kitchens serving up grilled steaks, lamb shanks and freshly caught fish. I suggest trying the pungent delicacy poisson cru, raw fish in a marinade of coconut milk, lime and peppers.

A view of Mount Otemanu on Bora Bora from the air

Set almost equidistant between Australia and South America, French Polynesia takes a long time to travel to, so it’s worth exploring more than one island. Each has its own character, and you can easily hop from one to the next on domestic flights or ferries.

The flights are an experience in themselves. When I first flew from Tahiti to Bora Bora, a few islands along the chain, I asked a flight attendant on which side should I sit. Duly sitting on the recommended left-hand side of the plane, I was rewarded as Mount Otemanu loomed into view. Bora Bora’s lagoon lay in front, framed by ribbons of motus (sand-covered reef islets). There were audible gasps from my fellow passengers as we flew over Mount Otemanu’s volcanic peak.

Snorkel through the coral gardens of Le Taha'a

French Polynesia is home to countless snorkeling spots, but I’d single out the island of Taha'a as the best for its unspoiled coral gardens. With water so clear you can see everything in detail, the array of coral is easy to appreciate. Petal-pink pillar corals look like miniature cities while the sea pen coral remarkably resembles a quill.

You won’t see larger sea creatures here, but the smaller marine life is arguably more fascinating. Cartoon-like sea slugs ebb along with the current as sea cucumbers scuttle along the sea floor. The coral can be rough underfoot, so wearing reef shoes is advisable.

A classic Polynesian resort, Le Taha’a Private Island and Spa lies on the Tautau motu facing the island of Taha'a. Its 57 thatched villas are furnished with bamboo, coconut ropes and exotic woods. Stay on the overwater bungalows and you’ll be woken by your breakfast arriving by outrigger canoe.

Laze on a motu on Bora Bora

A small palm-fringed island, or motu, on Bora Bora

The motus that circle the island of Bora Bora are long strips of palm-dotted sand between the lagoon and the island. The hotels set on them boast uninterrupted views of the jutting peak of Mount Otemanu, one of Bora Bora’s extinct volcanoes.

The beaches tend to be quite narrow, which hotels have compensated for by adding private decks to their bungalows. I lay watching striped threadfin butterflyfish and neon damsel fish darting in the water underneath my bungalow.

The InterContinental Resort & Thalasso Spa is my recommended hotel on the motus. Each bungalow has a private pontoon to swim from and the bedrooms are purpose built with glass walls looking out onto the lagoon. I suggest taking a speedboat out from the hotel to explore the lagoon and find spots where you can swim with rays or turtles.

At only 16 km (10 miles) across, the island of Moorea manages to consolidate multi-hued lagoons, waterfalls and flourishing jungle. The solid mass of jungle blanketing its interior seems void of human traces. In fact, it hides a myriad of hiking trails. The trails can be hard to pick out, so I advise exploring with a guide, available to book through your hotel’s concierge, for even the shortest walk.

Head deeper into the jungle for longer trails, where you can pause to take dips in pools fed by waterfalls. Make it up to the viewpoint of Col des Trois Cocotiers (the pass of three coconuts) for panoramic views of the jungle and encircling sea. You can drive up to Belvedere viewpoint and join the hiking trail from there which takes about three hours. The peaks of Moorea are so rugged that they have only been climbed by professional climbing teams.

Take a 4x4 tour of Moorea

Stone head carving near a marae on Moorea

I thought my explorations in Moorea would reflect the island’s naturally relaxed feel. In fact, I found myself being driven by 4x4 up a seemingly vertical road, the jungle passing in a blur. Touring the island in a 4x4, you see a lot, and at an exhilarating pace.

Jumping out of the vehicle, a closer look at the surrounding rocks reveals large hand-cut blocks arranged in geometrical shapes - the remains of one of the many maraes on the island. These temples were built by the Maohi, the original settlers. Slowly being covered by moss, they can be tricky to make out, but the occasional carved monolith is still discernible. Some marae have altars, which my guide suggested were built for human sacrifice.

The real highlight of the tour for me was driving to a viewpoint high enough to see right across Opunohu Valley in the island’s interior down to the curve of Cook’s Bay on the coast.

For me, what are billed as cultural dance shows often tend towards stale, touristic displays. I was proved wrong in French Polynesia. Most hotels host dance shows, and I’d suggest catching a few. Each troupe has its own identity, and the dancers’ enthusiasm was contagious, matched by their flamboyant headdresses and ever-moving skirts. Dances are carefully choreographed to tell a story, and the accompanying singing has a tribal beat.

Many of French Polynesia’s celebrations and annual festivals are focused around dance, and troupes practise for months beforehand to perfect their techniques.

A Beach Suite at the Vahine Island Resort

Very few islands can really offer a secluded stay, but I think privately owned Vahine Island Resort is a contender. This tiny island has nine bungalows with a mix of overwater and beachside options. It’s best accessed with a flight into Raiatea’s airport, the second largest Polynesian island, followed by a 30 minute boat transfer.

More rustic than the polished larger resorts, I enjoyed the Robinson Crusoe feel of the bungalows’ bamboo furniture and palm-leaf woven walls. Half the island has been left completely to nature, with untouched beaches and coconut groves to explore.

The hotel offers a castaway picnic. With a motorboat for transport, you’re pointed in the direction of an uninhabited motu to enjoy the afternoon in complete privacy together with a picnic basket packed with grilled fish and fresh salads. 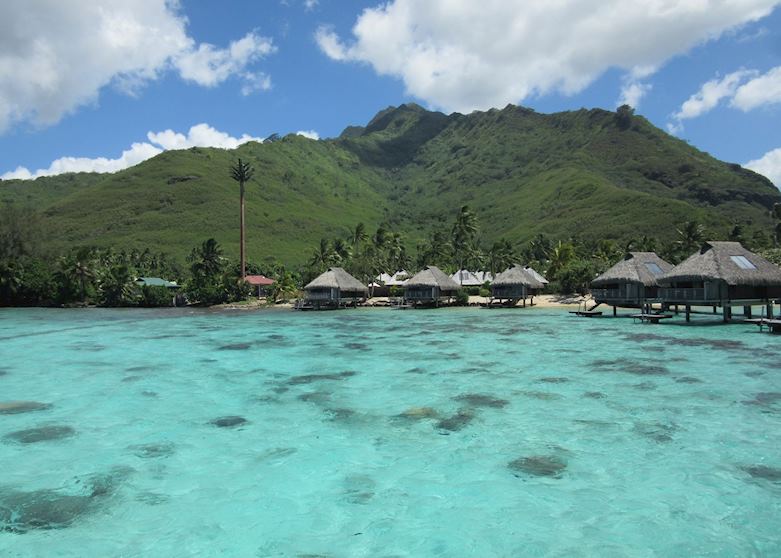 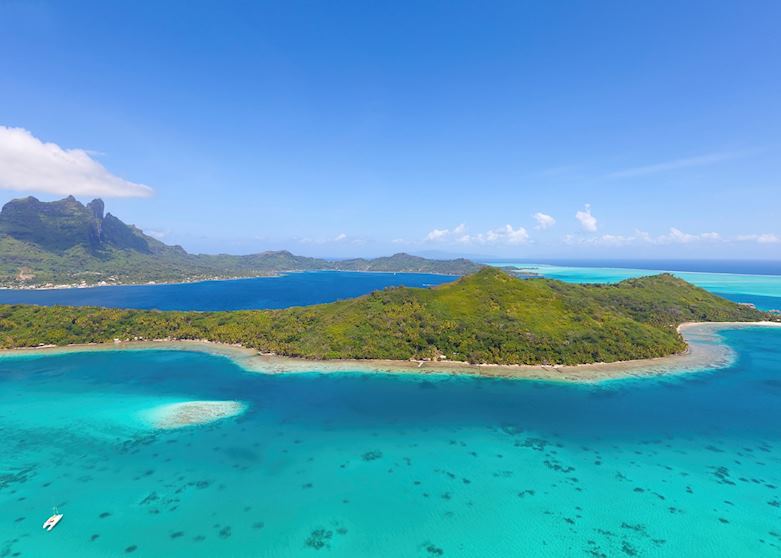 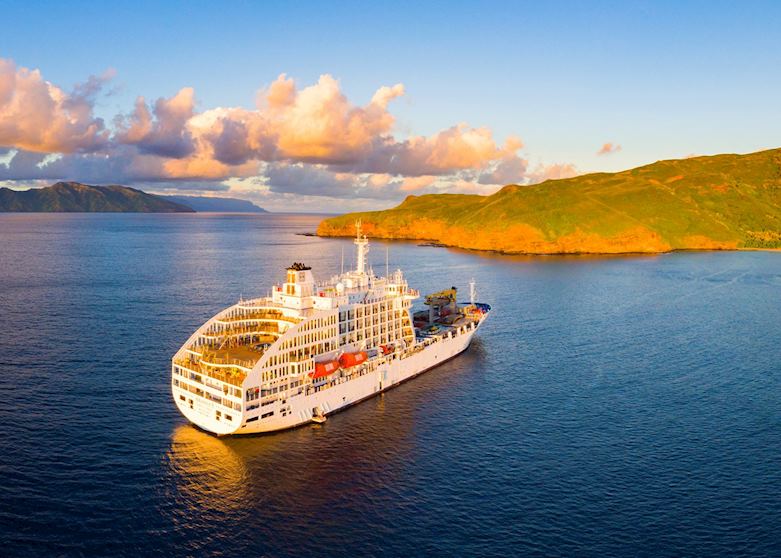 French Polynesia cruise on the Aranui 5