There are more than 6,000 Greek islands and islets scattered among the brilliantly blue waters of the Aegean, as well as a myriad of seaside towns and villages on the mainland. This is the land of Homer’s wine-dark seas, inspiring poets for millennia with sun-gilded beaches, whitewashed villages and jagged volcanic cliffs rising sharply from the crystal-clear waters.

They all have distinctive personalities, too. On Milos alone, you can choose from 72 different beaches, each with a different character: black or red sand, pumice pebbles or lava? You can hike, kayak, take a food tour or sailing cruise, explore local life or just laze on the beach. Here’s my guide to the best water-side destinations in Greece.

Santorini curls around a sea-filled volcanic caldera that looks as if a massive kraken took a bite from the island. Overlooking the bay, the towns of Fira and Oia cling to the sheer cliffs, their gleaming-white Cycladic buildings topped with domes that perfectly match the deep-blue water below.

This is the Greece of glossy magazine photo shoots, drawing the glitterati and cruise crowds who come here to see and be seen, and marvel at the sunsets over the sea.

For me, the caldera-facing villages live up to the hype and I suggest spending at least two days here. However, even if the glamorous side of Santorini doesn’t appeal, there’s more to the island if you know where to look. We can arrange a behind-the-scenes tour to discover the local life or you can take an archeological tour of Akrotiri.

A Minoan settlement on the south-facing coast, Akrotiri is Greece’s answer to Pompeii. The earliest evidence of habitation dates to the Stone Age, but it achieved prosperity during the Bronze Age, when it was a wealthy trading port between Cyprus and Crete. The same eruption that formed the caldera, however, covered the settlement.

The site was rediscovered in the 1960s and excavation continues today. My guide was a trained archeologist who had worked on the dig in the past.

Leading me along the same paths the Minoans once walked, he pointed out that there were no bodies at all, meaning that the city was evacuated ahead of time (unlike doomed Pompeii). He also explained the sophistication of the drainage system, multistory buildings and intricate frescoes, which were much more advanced that I imagined a Bronze Age culture would be.

Mykonos: for beaches and nightlife

Nicknamed the ‘The Island of the Winds’, Mykonos is a breezy destination known for the hedonistic crowds who flock here for the energetic nightlife. The beaches are lovely, if crowded, and offer all the amenities including lounge chairs with wait service. You’ll pay for the pleasure, but that too is part of visiting Mykonos.

Beyond the party atmosphere, however, you can still catch glimpses of authentic island life as well as some of the most important history in the Cycladic Islands. This is the launching point for a boat trip across to the sacred island of Delos, the birthplace of Apollo and Artemis, and one of the most important cities in ancient Greece. You can read more about it in our guide to classical sites in Greece.

For a literal taste of local life, I suggest a cheese-focused cooking lesson. Located just a short drive from Mykonos town, George leads a family of local farmers who raise sheep, cows and goats. He began by introducing me to the livestock before we headed into the kitchen that’s attached to the cheese-making facility.

Working amid the gleaming stainless-steel counters and coolers, I started by making saganaki — a traditional dish that consists of a square of salty, pungent cheese fried in a skillet until the exterior is crusty brown and the interior is hot and melting. At George’s urging, I cut my version in two and topped one half with citrus juice and drizzled the other with golden local honey, followed by a sprinkle of sesame seeds.

That was just the first course in an afternoon of decadent cheese-based items. Under his patient direction, I also made cheese-stuffed meatballs and traditional salad with feta, as well as a dessert of fried pastry-wrapped cheese that was finished with honey.

Milos: for 72 beaches and outdoor fun

In the vast pantheon of Greek Islands, Milos is the one I like best. Like Santorini, it’s a comma of volcanic rock around a watery caldera, but it lacks the glitz (and crowds) of its better-known counterpart. The rocks that make up the island are jagged and come in a rainbow of minerals including red, pink, white and orange.

This mineral diversity defines Milos. The different beaches, which vary wildly from one to the next, are defined by the material on the shore. The most photogenic is Sarakiniko, which boasts a wave-smoothed white-pumice shore that’s been carved into fantastical towers and arches by wind and tides.

Located on the caldera, Papikinou is a soft-sand beach that’s shaded by trees, while south-facing Tsigrado is a cove that’s accessed by a ladder down cave-riddled cliffs.

To explore, you can take a guided hike along the shoreline or a geological tour that includes the mining museum and a chance to feel the heat that still rises from the not-quite-active volcano under the island.

You can also visit several of the beaches on a sailboat cruise around the island. My captain, Alex, took me to four out-of-the-way beaches where I could slip out of the boat and swim. At Kleftiko, I swam through sea arches in water that was so blue it looked as if someone had spilled turquoise dye everywhere.

Just a 90-minute ferry ride from Athens, Hydra is one of the most accessible of the islands from the mainland. There are no wheeled vehicles on the island — not even bicycles — just pedestrians and the occasional donkey to help haul luggage, giving it an indolent atmosphere.

There’s not much to do here other than relax. Hydra town, built around a tiny deep cove, is filled with exquisite stone mansions, a legacy of wealthy sailing captains in the late 18th and early 19th centuries. The honey-stone buildings, all topped with low terracotta roofs, make it a pretty place to stroll and enjoy the chic boutiques and cafes.

Visitors over from the mainland can make the town a little crowed during the day, especially in the summer when wealthy Athenians come to see and be seen. (The port is a major yacht anchorage, too.) But once the last ferry leaves, everything seems to sigh and relax, so I suggest staying at least one night to enjoy the quiet.

If, amidst all this laid-back charm, you feel the need to exert yourself, we can arrange a guided hike up to one of the island’s monasteries. It’s a long hike up sunny hills covered in scrub and brush, but the views from the peak are worth the effort. If you visit in the morning, as I did, you might get to chat with the nuns who live here, though not if you arrive during their afternoon siesta.

Today, Nafplio is a waterfront town that bustles on weekend with Athenians who come to appreciate its brightly painted homes, cobblestone streets and postcard-worthy views. It’s also a good base for exploring the nearby ancient site of Epidavros. Despite this peaceful atmosphere, however, the city’s very architecture is defined by its strategic location on the upper curve of the Argolic Gulf.

For centuries, the Byzantines, Franks, Venetians, and Turks battled over this vital port, which was key to controlling much of the Peloponnese, Greece’s southern peninsula. You’ll see narrow, Venetian-style houses in bright shades of turquoise, mustard, pink and orange, with small balconies that drip with bright pink bougainvillea.

You can still visit the 18th-century Turkish mosque where the first Greece parliament was held after the war of independence. And in the heights outside of town, you’ll find ruined Byzantine and Frankish forts.

But the most important sites are the still-standing fortresses. Bourtzi Castle seems to float in the bay, providing a base from which defenders could winch up a chain to block the throat of the port. And high on a rocky hill overlooking the town, mighty Palamidi Fortress was built in the early 1700s and played a vital role in the Greek War of Independence a century later.

The best way to get a feel for all these fortifications is from the water, which is why I recommend a guided kayaking tour along the city’s waterfront.

Sporting a neatly trimmed beard and wearing a rash guard against the sun, my guide led me out into gulf to Bourtzi Castle and explained the city’s turbulent history. Sitting low in the water in my kayak, as raiders must have done hundreds of years ago, and looking up at these imposing buildings, it was easy to see why they were so important during war time.

When to go, how long to stay and how to get around

The inhabited islands are linked by a network of efficient, comfortable ferries that operate year-round. I suggest visiting in late May, June or September, when the weather is fine but the cruise crowds aren’t as dense.

If you’re just visiting the islands and coastal towns, consider a visit of at least ten days, though these are places made for lolling in the Aegean sun, so you could easily stay two or even three weeks. 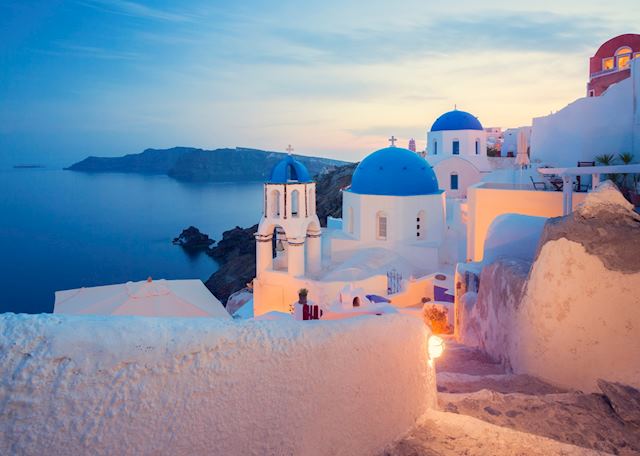