A striking volcanic setting, traditional white houses teetering on cliffsides, and vivid sunsets make Santorini one of the best-loved Greek islands. Along with this, you can expect fine food and indulgent lodgings, local wines, multi-hued beaches and views that stretch beyond its cliff-cradled lagoon out across the sea.

Crescent-shaped Santorini, with its high cliffs and deep-blue lagoon, is the remains of a much larger volcanic island blown apart by a cataclysmic eruption almost 4,000 years ago. The heart of the island collapsed into the sea, leaving a massive caldera nearly surrounded by pumice cliffs. Many hotels are hidden in traditional caves dug out from the cliffs, offering you an unusual perspective on the island.

Things to see and do in Santorini

A Minoan city long buried under layers of ash, the Bronze Age site of Akrotiri displays a level of sophistication that makes it one of the most remarkable ongoing archaeological excavations in Greece.

The city was rediscovered in 1967 and has only been partially uncovered. But, it’s clear that it was a wealthy place with large houses decorated with detailed frescoes, hot-and-cold-water facilities, and elaborate drainage systems. Stone staircases lead to upper levels in the houses, large storage jars remain intact, and a loom workshop suggests a source of Akrotiri’s wealth.

The Museum of Prehistoric Thera in Fira houses finds from Akrotiri, some of which date back as far as the 17th century BC.

We can arrange for you to tour the site with a private guide.

Most of Santorini’s modern towns perch along the caldera edge, looking down over the lagoon below. Fira, the island’s capital, tumbles down the cliffs in a jumble of whitewashed houses and blue-domed churches. It’s also home to the Orthodox Metropolitan Cathedral, with its vivid mosaics, bell tower and richly painted frescoes.

From Fira, you can also walk out to Skaros Rock, a craggy peninsula with sweeping views from its little church. Or, hike the footpath along the edge of the caldera to the village of Imerovigli, about two hours away.

Quieter than Fira (and, we think, more picturesque), Oia is a traditional hilltop town whose blue-domed churches are set against a backdrop of whitewashed houses and azure sea.

Cafes, tavernas, art galleries and craft shops border the streets, and the remains of a Venetian fortress crowns the clifftop. Below the town, down a long series of steps leading past blood-red cliffs, is the tiny port of Ammoudi with its brightly painted fishing boats and many tavernas.

Oia is undeniably handsome and particularly well known for its sunsets. Its reputation means it gets very crowded in the evenings, and you can view the same sunset from many other spots with fewer crowds that the village attracts at sundown.

The smaller towns and villages in the interior of the island are generally quieter than those on the caldera edge, though they can still get busy in high summer. At other times of the year, they offer a more authentic insight into local life.

Emporio, in Santorini’s southeast, is a tangle of narrow streets lined with traditional houses that surround a medieval fortress which, in turn, encloses a 6th-century church.

Nearby are the lively beaches of Perissa and Perivolos. Sleepy Megalochori, with its strong wine-producing tradition, and Pyrgos, with its Venetian castle and panoramic views, are other good bets to visit outside the main hubs.

Along with its reputation for views, Santorini is one of Greece’s most important wine producers. Grapes have been grown here since ancient times, and it’s most renowned for its fresh, dry white wine. It’s produced in a unique manner, where the vines are trained into a basket-like structure that protects the fruit from harsh winds.

Many of the vines are centuries old, as the volcanic soil makes them immune to the phylloxera parasite that has devastated other wine-growing areas. The island is home to several highly regarded wineries, where you can take a tour or enjoy a tasting and discover more about the small but thriving Santorini wine industry.

Geothermal activity in and around the Santorini Archipelago reminds you of the islands’ tempestuous past. A walk along the cliff path on the island of Nea Kameni, a short boat ride from Santorini, takes you to smouldering craters, where an intense smell of sulphur fills the air.

You can also take a boat trip around the island of Palea Kameni to visit its hot springs or take a swim in Agios Nikolaos Bay. Here, geothermal currents keep the water the temperature of a hot bath.

Santorini is a seasonal destination, with many properties only open from April to October. To get the best of the weather and avoid the summer crowds, we recommend visiting in April, May or October. July and August are peak season, when the island’s roads and villages can get crowded, and temperatures peak with highs of roughly 30°C (86°F). 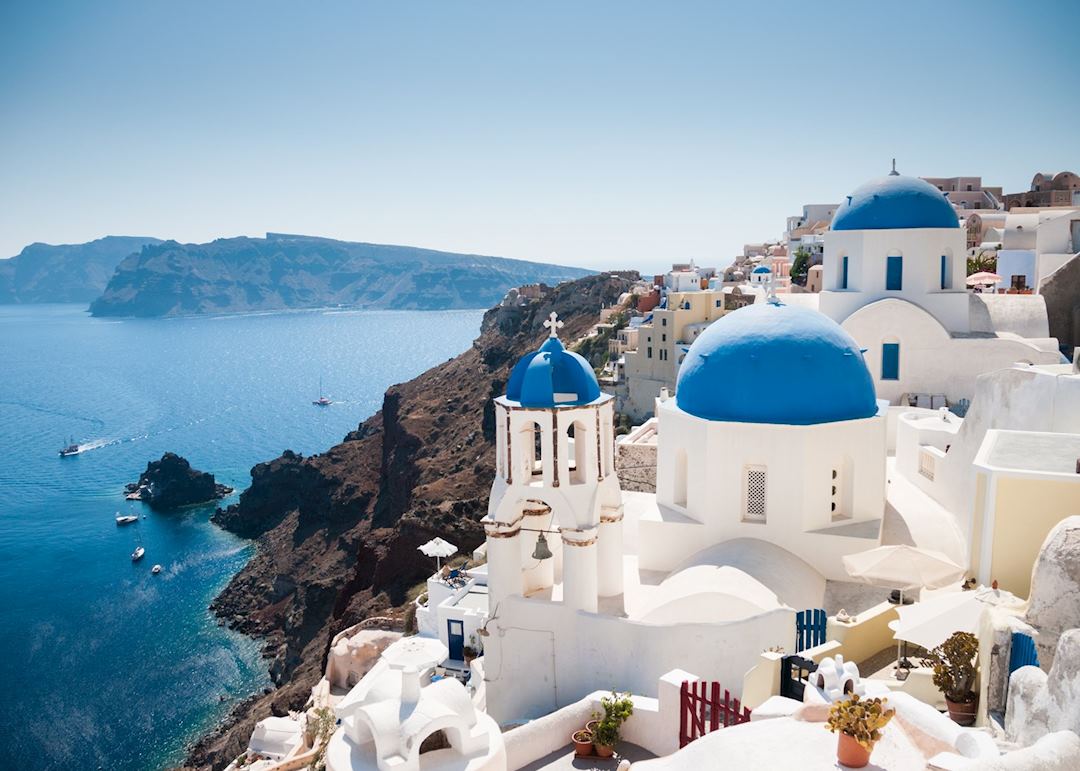 Start planning your trip to Santorini

We’ve selected a range of accommodation options for when you visit Santorini. Our choices usually come recommended for their character, facilities and service or location. Our specialists always aim to suggest properties that match your preferences.

Our specialists seek out authentic ways to get to know the places that could feature in your trip. These activities reflect some of the experiences they've most enjoyed while visiting Santorini, and which use the best local guides.