According to Greek mythology, Zeus released two eagles from either side of the ancient world and they met at Delphi, the centre of the Greek universe. Gaia, the primal Mother Earth goddess, was also said to reside here, and Delphi became one of the most sacred sites in the ancient world.

It was also home to the Oracle of Delphi, who was consulted on important decisions for more than 1,000 years.

Understandably, the site attracts large numbers of visitors. But, despite that, a definite air of mystery still surrounds the ruins, which are set in a dramatic fashion on a cliffside with views stretching across the Gulf of Corinth and on to the Peloponnese.

Once, visitors came to Delphi on foot or by boat then hiked an ancient path up to the site. Today, Delphi is a UNESCO World Heritage Site. Visitors arrive by coach to climb the long track, known as the Sacred Way, which leads to the Temple of Apollo at the top of the hill.

Arriving early in the day gives you the best chance of seeing the site at its quietest. At this time in particular, the mystery and spirituality of the place are unmistakable, as you walk between the remains of the votive monuments, statues and treasuries that once lined the well-trodden path through the complex.

Things to see and do in Delphi

Temple of Apollo & the Oracle of Delphi

The 4th-century Sanctuary of Apollo is considered the focal point of ancient Delphi. The Temple of Apollo stood at its heart, and it was here that the Pythia (priestess), the mouthpiece of Apollo known as the Oracle of Delphi, delivered her prophecies.

People came from far and wide to consult her, visit the eternal flame and read the Delphic Maxims ‘Know Thyself’ and ‘Nothing in Excess’, which are carved into the stone in the temple vestibule.

All that remains of the temple today are the foundations, but look out for the 6th-century BC Polygonal Wall, which supports the temple platform. The stones are cut into unusual polygonal shapes and carved with inscriptions, many of which relate to the emancipation of slaves.

Above the Temple of Apollo sits the theatre, which dates from the 4th century BC. It’s still well preserved, and you can climb to the top tier of the seating for views of ancient Delphi, the surrounding mountains and the valley below.

When built, the theatre had enough seating for 5,000 spectators and was used during the Pythian Games, held at Delphi every four years from 590 BC.

In 2015, a replica of the Serpentine Column, a bronze pillar erected to commemorate the defeat of the Persian Empire at the Battle of Plataea in 479 BC, was added to the site.

From the theatre, a path leads to the 5th-century-BC stadium, one of the best preserved in Greece.

Built to host the athletics of the Pythian Games, it was reconfigured by the Romans in the 2nd century and has well-preserved tiered stone seating. A running track with carved stone starting blocks is the highlight.

South of the path is the gymnasium, which had an outside track and what was once a covered track for wet-weather training. A peristyle courtyard for boxers and wrestlers sits below this, as well as a cooling-off pool.

Although it’s roped off for safety reasons, you can still get a good view of the gymnasium from the path.

Offering a comprehensive overview of the treasures found in ancient Delphi, and an idea of what the site must have looked like in its heyday, the Delphi Archaeological Museum is well worth your time.

It sits within the grounds of the site and displays its collection in chronological order. Highlights include a life-size bronze charioteer and the Sphinx of Naxos dating from 560 BC.

The frieze from Delphi’s Siphnian Treasury is another notable exhibit, which depicts the battle between the gods and the giants. The museum’s other treasures include the Acanthus Column of Dancers with three women dancing around its top.

Beyond the museum lies the small but busy town of modern Delphi. It has numerous shops and restaurants but quite a commercial nature.

Although you can visit Delphi year-round, its altitude and extremes of temperature in winter and summer makes March to May or September to October the best time to go. Summer can be very hot and coincides with peak visitor numbers, while snow can be an issue in midwinter.

Our itineraries will give you suggestions for what is possible when you travel in Delphi, and they showcase routes we know work particularly well. Treat them as inspiration, because your trip will be created uniquely by one of our specialists.

Our expert guides to exploring Delphi

Written by our specialists from their own experiences of visiting Delphi, these guides will help you make the most of your time there. We share both our practical recommendations and the best ways to appreciate Delphi at its best.

We’ve selected a range of accommodation options for when you visit Delphi. Our choices usually come recommended for their character, facilities and service or location. Our specialists always aim to suggest properties that match your preferences. 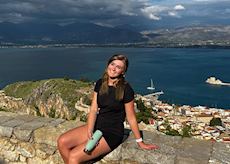