Whitewashed houses and churches, lively beaches, clear blue seas and glamorous nightlife are all hallmarks of cosmopolitan Mykonos. Along with quintessential views and reliably warm weather, the Greek island also offers upmarket hotels and guesthouses, art galleries and a legion of bars, clubs and restaurants that attract a young and affluent crowd.

Wander beyond the town, though, and you’ll find archaeological sites, old monasteries, quiet beaches and the old thatched windmills that grace the island’s postcards. Outside peak season, Mykonos relaxes into a quieter, more traditional lifestyle.

Things to see and do in Mykonos

The island’s main town is a labyrinth of narrow streets lined by whitewashed houses, shrines and little churches, where bougainvillea drips over balconies and provides shade to hidden squares. Its confusing layout is deliberate. Once aimed at confounding attacking pirates, it leads you past little shops and tavernas, art galleries and bars.

The town also has archaeological, folklore and maritime museums and, along the waterfront, a fleet of fishing boats bob in the port. Here, you can linger over a meal in one of the many cafés and restaurants.

You can also explore ‘Little Venice', with its row of restaurants and bars directly on the waterfront, or venture beyond to Mykonos’s much-photographed windmills on the headland.

Mykonos is replete with churches. As an act of devotion and a shrine for family remains, many wealthy Mykonian families erect their own private chapels and these are scattered around the streets of the town, their brightly painted doors contrasting with the whitewashed walls.

The town’s oldest church, Paraportiani, is now a local landmark. It’s a combination of four smaller chapels, which sit on a promontory overlooking the sea.

Wander anywhere around the town or across the island and you’ll happen upon many examples of local churches, traditionally built facing the sea to aid the safe return of local fishermen.

The most notable official attraction is the Monastery of Panagia Tourliani at Ano Mera. Founded in the 16th century and rebuilt in the 18th century, its high whitewashed walls shelter a red-domed church with ceiling frescoes, chandeliers and an impressive altar screen created by Florentine artists. In the courtyard, seek out the bell tower decorated with folk carvings.

The island of Delos

One of the most important archaeological sites in Greece, Delos is easy to visit in a day from Mykonos. According to Greek mythology, the twins Apollo and Artemis were born here, and the island was an important place of pilgrimage for visitors from all over Greece.

With the pilgrims came trade, and the sacred island grew into one of the most influential commercial and political hubs of the Mediterranean.

Today, it’s protected as a UNESCO World Heritage Site. Its well-preserved ruins and archaeological museum offer a vivid insight into life and beliefs in ancient Greece.

The island’s beaches are typified by soft sands drifting into clear turquoise seas. Many of the best beaches run along the south coast, though some are firm party destinations with all-night beach clubs, such as Paradise Beach and Super Paradise Beach.

You can head to some of the more secluded beaches elsewhere on the island, such as Agios Sostis or Fokos, for a quieter experience, laid-back bars and little tavernas.

Eating and drinking on Mykonos

You’ll encounter a huge choice of tavernas, cafés and restaurants all across Mykonos, and leisurely meals are a great pleasure here. Fresh fish and seafood are the stars of the menu, whether you eat in sleek, high-end restaurants or little beach shacks with no signs of electricity but just a simple grill.

Also look out for traditional Mykonian dishes, such as louza (a cured pork sausage) and kopanisti (a pungent fermented cheese spread).

Mykonos is a popular summer destination and, despite the extremely hot temperatures, the island gets very crowded during July and August. May to June and September to October are better times to go. For the best combination of blue skies and tranquil streets come at the beginning or end of the season in May or October. From November to April, many of the island’s properties close. 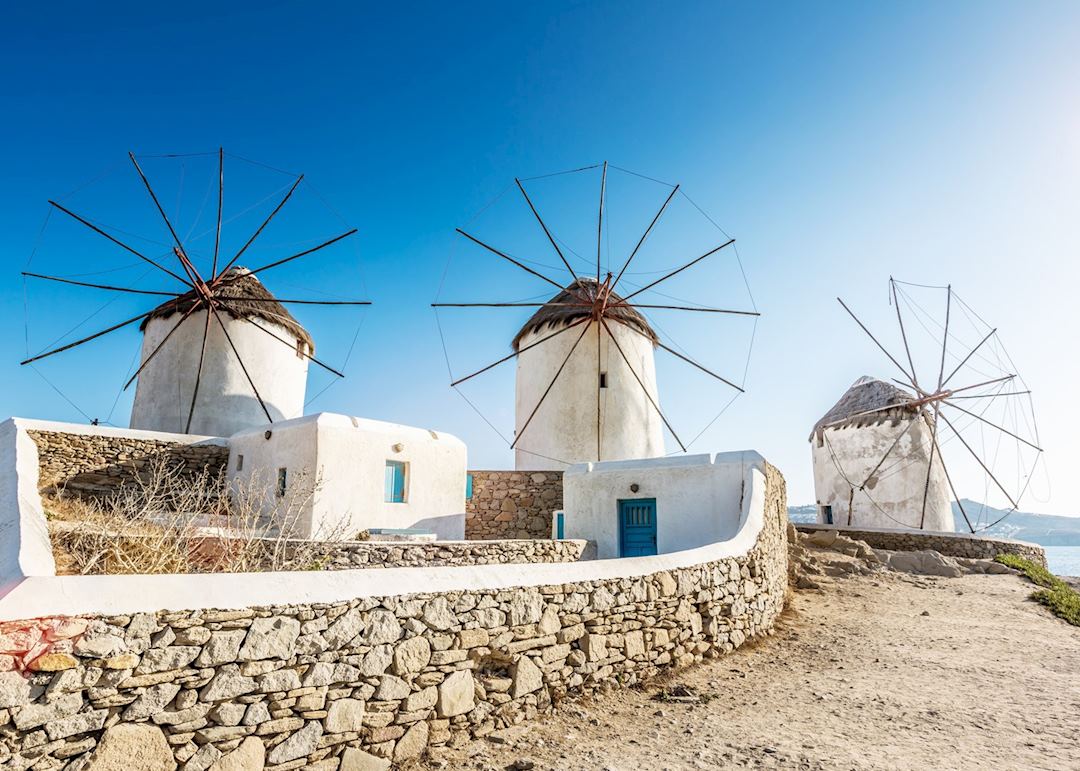 Start planning your trip to Mykonos

Our expert guides to exploring Mykonos

Written by our specialists from their own experiences of visiting Mykonos, these guides will help you make the most of your time there. We share both our practical recommendations and the best ways to appreciate Mykonos at its best.

We’ve selected a range of accommodation options for when you visit Mykonos. Our choices usually come recommended for their character, facilities and service or location. Our specialists always aim to suggest properties that match your preferences.

Our specialists seek out authentic ways to get to know the places that could feature in your trip. These activities reflect some of the experiences they've most enjoyed while visiting Mykonos, and which use the best local guides.