Set on the southern slope of Mount Parnassus, Arachova is a mountain village once known for its folklore and crafts and reinvigorated thanks to its proximity to Greece’s largest ski area.

With its narrow cobbled streets lined with traditional houses and a host of bars, restaurants and shops, it makes a pleasant base for visits to nearby Delphi.

Steep stairways link the meandering streets of Arachova, which cascades down the slopes of Mount Parnassus, a sacred spot in Greek mythology that was the home of the Muses. It’s easy to see how the mountain inspired such reverence, and Arachova has a particularly scenic setting with panoramic views at every turn.

Arachova’s most obvious landmark is the clock tower that sits on top of a rocky outcrop, surveying all around it. Above it, at the highest point in the village, and crowning a flight of 264 steps, is the church of Agios Georgios, which is dedicated to village patron Saint George.

The current church dates from 1833, but remnants of the original 17th-century church are still visible. There are sweeping views from the courtyard.

On 23rd April, the feast of Saint George, an annual three-day festival begins outside the church with a procession featuring local costumes and traditional music played on daouli drums and pipiza flutes. It’s followed by horse races, dancing and feasting from open food and wine stalls.

There are several other smaller Byzantine churches around the village, some with well-preserved frescoes inside. Wandering the quiet laneways lined with old stone houses, you’ll also get a feel for the more traditional side of daily life in the village.

Arachova’s ethnographic museum, housed in a grand neoclassical building that was once a primary school, is also worth a stop to get an introduction into local folk traditions. Inside, you can see local costumes, traditional looms, and examples of weaving and goldwork embroidery.

Along with weaving and textiles, Arachova is well known for the quality of its food and wine. Lakka Square, the village’s main meeting point, and the streets around it are thronged with cafés and restaurants.

It’s also worth trying to find the dry, regional mavroudi wines with their deep-red hue and distinctive taste.

Tsipouro (pomace brandy) is also distilled locally, and you can buy it in many of the small shops selling traditional local produce such as textiles and flocati rugs, wood carvings and handicrafts.

In winter, Arachova turns into one of Greece’s most popular skiing villages. Residents refer to it as the ‘Winter Mykonos’, due to the number of high-flying Athenians and celebrities who flock here.

It’s best to visit Arachova between April and June or September and October. In July and August, temperatures can reach 30°C (86°F). The busy ski season runs from December to May, with the high altitudes offering long-lasting snow cover. In late April, three days of festivities mark the feast of the village’s patron, Saint George. 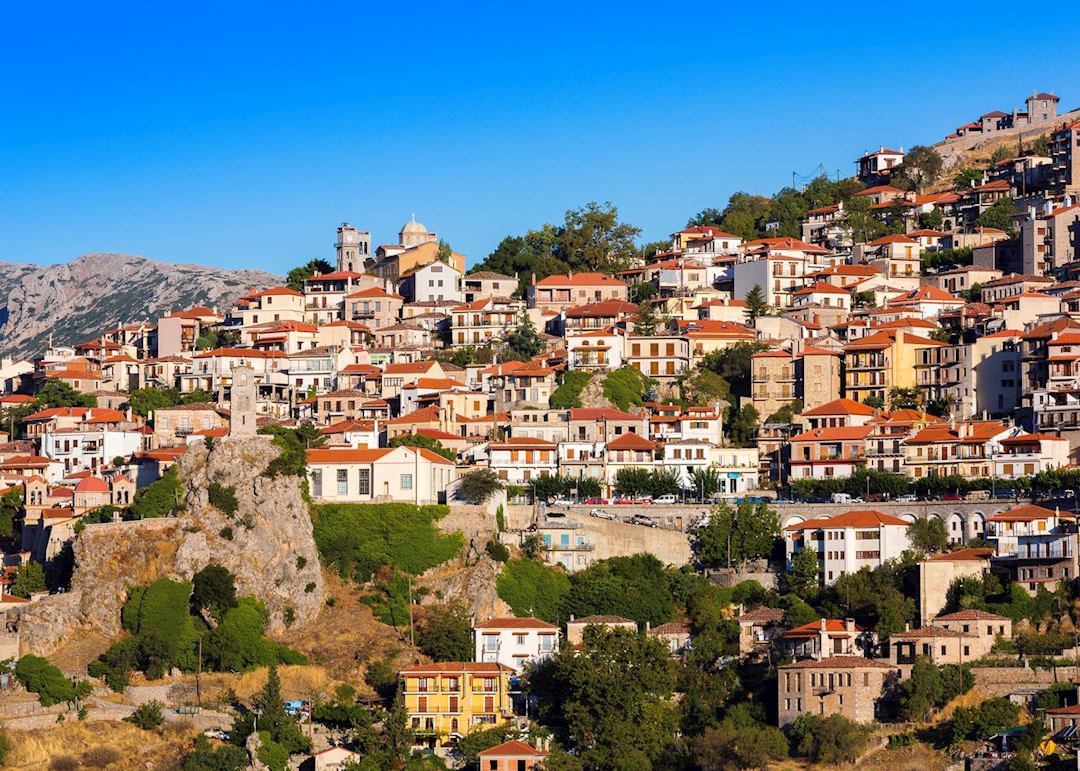 Start planning your trip to Arachova